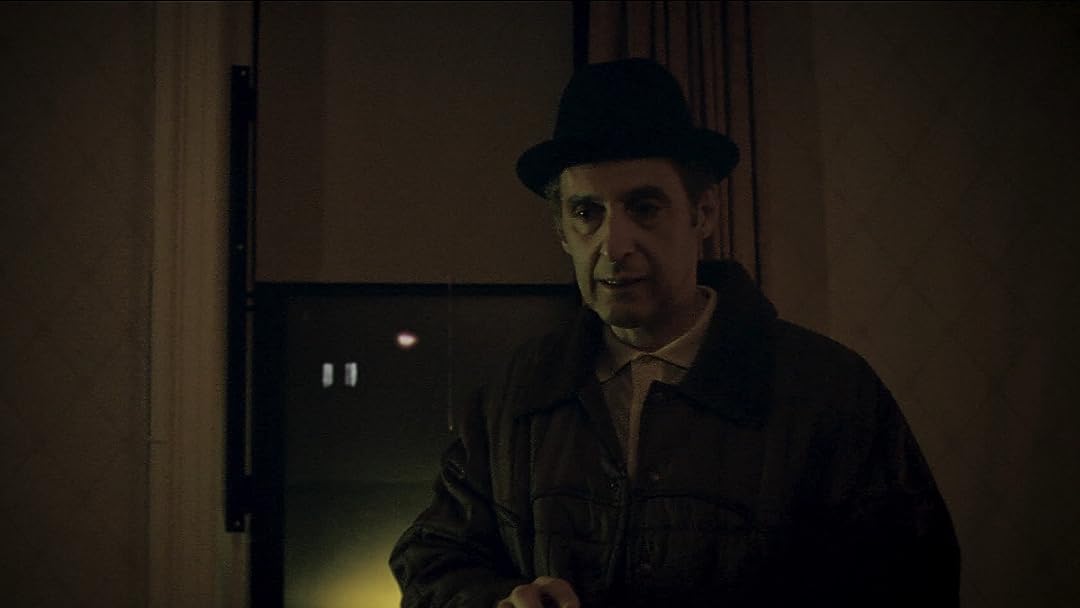 Diane RathReviewed in the United States on June 10, 2013
5.0 out of 5 stars
A Charming Love Story
Verified purchase
1-900-TONIGHT is a sweet love story about two lonely people living in New York City. John Turturro plays a bike messenger named Wooly. Kate Borowitz plays Patti, an agoraphobic shut-in. These two characters are trying to find love and companionship on an adult phone sex line. Both are sexually inexperienced because of their lack of social skills and quirky personalities. Neither finds what they expect on the sex line, but their attempts to form a romantic relationship are often comical and at times frustrating for them. These two great actors give convincing performances making Wooly and Patti seem like real people, and all the while keeping the audience smiling. Michael Di Jaccomo has done a great job of creating characters that we really care about and brings us all the way home with this delightful film.
3 people found this helpful

Leah TuckerReviewed in the United States on September 7, 2019
1.0 out of 5 stars
Could not finish it
Verified purchase
I was so bored the first 15 minutes I did not watch the rest.

Connie ChoothesaReviewed in the United States on October 13, 2013
5.0 out of 5 stars
1-900-Tonight Review -- I loved it!
Verified purchase
I really enjoyed watching the progression of the friendship between these two lonely hearts. There were many funny lines by John Turturro which had me laughing out loud. The anticipation of the two characters' ultimate meeting had me on the edge of my seat. I didn't get to watch this movie at the San Diego Film Festival when it came there in 2011. I was intrigued by the trailer of the movie which was being shown at the festival as "Somewhere Tonight." I remembered it and looked for it on Amazon and found that it was adapted from a Dutch movie by the title of 1-900-Tonight. This movie did not disappoint and will now be on my list of favorite movies!
One person found this helpful

Russell Craig RichardsonReviewed in the United States on May 10, 2013
4.0 out of 5 stars
The Beauty of Intimacy
The film 1-900-TONIGHT (which I understand was originally called simply 'Somewhere Tonight' - IMHO a more informative and less raunchy title) is a wonderful, subtle comedy of errors and manners which takes the isolation of the modern world, and spins an almost fairytale aura around the ways in which two lonely souls reach out to one another, and the trials and felicities of that journey. In these times when our privacy is invaded by surveillance cameras, and so many ersatz ways of contacting people are in (rather desperate?) vogue; whether it's the sex lines of this film's starting premise, Facebook, speed dating, chat forums or IM, this story restores one's faith in the power of intimacy (the human voice in all of its nuances) and human truth. The film is also very funny in a similar gentle vein, but does not shrink from the sometimes ugly face of tentative relationship building: sudden jealousies, petty insults, embarrassed silences, and moments of either poignant loneliness or stoic real-life 'get on with it' situations.
The performances from the two main characters are so finely shaded that we readily follow the fine back and forth between the two lovers in waiting; sometimes eager, sometimes stepping back; sometimes hesitant, sometimes with a burning intensity. Both actors - each given a goodly amount of screentime (though perhaps John Turturro has a more sympathetic role to get his teeth into?) - convince in their different ways, allowing a see-saw of emotions and expectations. Katherine Borowitz handles a potentially difficult persona with fine skill, and the 'couple' would not be out of place in a classic Woody Allen movie, though I feel like suggesting this film digs a little less superficially into love and loneliness than even Mr. Allen has.
Finally, the muted and co-ordinated color palettes of the various settings, and the subtly off-key framings show a craft and control rare in such intimate cinema, harking back to pre-video times where image quality and thoughfulness were prime considerations for filmmakers - not just plots and perhaps dialogues.
An unhesitating recommendation for this gem of a film by Michael di Jiacomo, please set aside an evening, invite a friend and enjoy a work which is classical in its modernity.

J. BoggiReviewed in the United States on May 18, 2013
4.0 out of 5 stars
1 900 Tonight
Firstly, this movie was first titled Somewhere tonight, and I will refer to it as such. Secondly, the first review (below) is written much better than I will ever write. So I will just add to that gem of a review.

WHY on earth do most art films have to come from Europe to get released to a wide audience? To me this movie is an instant classic.

There are some actors who essentially play the same character while acting very well in their movies. Not to be counted among those actors, John Turturro created what is arguably his best character in Somewhere Tonight. Kathleen Borowitz happens to be Mr. Turturro's wife. That helps explain their excellent chemistry. She becomes an agoraphobic so convincingly that I wanted to get her some help.

And then of course we have Michael Di Jiacomo. His 1989 NYU graduate film won a Student Academy award. A review in the LA times of that movie dared to use the word genius. Bowing to the description written below for the most part, we are left to try to put Michael in a category. I say that he speaks with a voice of his own and I look forward to watching the expressions of my fellow movie goers in a theater in the near future. They should be watching this film, but I will settle for his next one.

Congrats to all, but especially to Michael Di Jiacomo. I hope you all get to see 1 900 tonight ( previously titled Somewhere Tonight ) http://articles.latimes.com/1989-07-24/entertainment/ca-40_1_student-film
3 people found this helpful

hugh parkerReviewed in the United States on May 18, 2015
5.0 out of 5 stars
Tedium
I gave this film the big five stars because it is one of the most cloying movies I've ever seen, and it ought to get credit for that. It can be very funny, and then it will go on long, painful journeys into the heart of mediocrity. Somewhere in the middle of your boredom, you will forget that you had plans to jump off the roof during the movie so that you wouldn't have to see any more of it. Once in a while, a particularly offensive remark will hook your nose and start dragging you to the surface, but you'll spit that hook out real quick, and then glide down and writhe into the bottom of boredom.
See all reviews
Back to top
Get to Know Us
Make Money with Us
Amazon Payment Products
Let Us Help You
EnglishChoose a language for shopping. United StatesChoose a country/region for shopping.
© 1996-2022, Amazon.com, Inc. or its affiliates