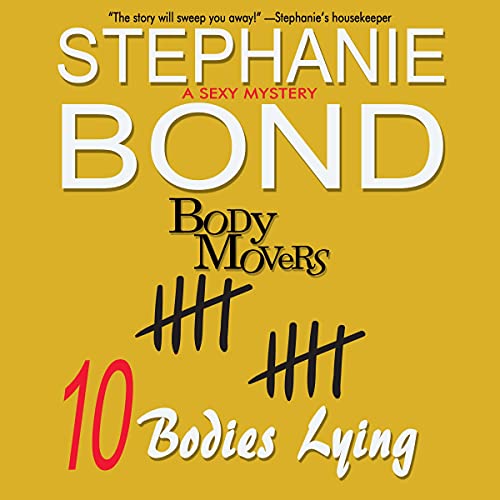 Carlotta Wren is dazed and confused - everything she thought she knew about her life has been a lie. How can she ever trust anyone again? And where does she go from here?

She hopes a business trip out of town will help to clear her head.... Instead, it lands her in the middle of a murder, as the prime suspect! While Carlotta works frantically to prove her innocence, she's also forced to confront the lies she's been telling herself. If she manages to get out of this mess, she'll have to get real about the kind of life she wants, and the person she wants to spend it with.

If you're looking for laugh-out-loud books, check out the Body Movers series! To-date, titles in the series include:

Q: Do I have to listen to the Body Movers books in order?

A: It's best to listen to the first book, Body Movers, first. But Party Crashers stands alone as a mystery. Carlotta Wren is a secondary character in that book, so you can circle back to enjoy Party Crashers later - and see Carlotta before she was scared straight!

Jennifer
5.0 out of 5 stars Enjoyable read.
Reviewed in the United States 🇺🇸 on November 8, 2020
Verified Purchase
This is the 10th book in the Body Movers series. In this book, Carlotta is still reeling from the revelation that her mother dropped on her. And she in a state over the things that have happened on her life. But she’s excited to start a new chapter in her life with her new job. When her and her assistant travel to Dallas for training, she expects to learn all about the running of a bridal store. She doesn’t expect to find the body of her coworker.

Reading this book, was like getting reacquainted with old friends. I’ve truly enjoyed this series, and this was another wonderful read. Carlotta is such a strong character. And you get invested in her and Wesleys lives. You are rooting for them. Definitely recommend this book, and this series.
Read more
Helpful
Report abuse

GameGal
5.0 out of 5 stars Book 10 in the Body Movers series is an intriguing addition!
Reviewed in the United States 🇺🇸 on June 12, 2019
Verified Purchase
I love the Body Movers series and this was a great addition! Carlotta's life is in turmoil. She feels everyone has lied to her including her parents and Jack, among others. Carlotta got a promotion to Director of the Bridal Showroom at Neiman Marcus where she has worked in all 10 books. Carlotta and her assistant Patricia go to Dallas for a work trip. Patricia is flirting with every guy she meets and has a blind date in Dallas. Patricia ends up dead and it is ruled accidental. Carlotta is still waffling between Jack and Coop but seems to be leaning towards one of them. I get it but I'm not on board. Wesley is still Wesley but less annoying than in the other 9 books. He is trying to figure out his life. This book kind of leaves everything up in the air in preparation for the next book or two to continue the specific storyline over multiple books like Stephanie Bond has done in the past. Quite enjoyable and a must read for Body Mover fans!
Read more
One person found this helpful
Helpful
Report abuse

Ang B
4.0 out of 5 stars Ready to read the next one
Reviewed in the United States 🇺🇸 on February 11, 2020
Verified Purchase
I have loved this whole series. I'm ready for the next one. Charlotte and the whole gang are a great set of characters. I would like to see Wesley's life straighten out for good and for Peter to get out of jail and just be a good friend to her.
As for Cooper and Jack, I've always been a Jack fan. BUT I am now tean Cooper. If Jack really loved her, he would share his life and things about his self worth her. Cooper seems to always be there for her. Unless things drastically change, I'm staying team Cooper.
The 4 stars is only because of the abrupt cutoff of the book and we'll have to wait awhile for the next book:(
Read more
Helpful
Report abuse

Sharon R -- A Regular Gal
2.0 out of 5 stars Weak Effort - Disappointing
Reviewed in the United States 🇺🇸 on April 11, 2020
Verified Purchase
I put off purchasing this installment in the Body Movers series because of all the negative reviews. But I knew the next book was coming out soon and I had the opportunity to purchase this one for $0.99, so I did. I'm glad I only spent $0.99 on it.

The book continues where book 9 left off but it doesn't seem like the author was clear on what she wanted to write in this book. I can't believe she charged many people $6.99 for a book that is half the length of the other books in the series. Beyond that, it just seems she used this book to introduce a lot of new concepts that (I hope ) she plans to flesh out in the next book. At this point, I am worn out with the Jack versus Coop thing. And I don't get why all the sudden she's turned Randall into a jerk.

I pre-ordered book 11 but if it doesn't get any better, that's it for me - for this series and maybe for this author. It seems like she's been so busy focusing on doing these mini-installment/serial type books that she's forgotten how to put a complete book together. And while I understand she needs to leave some questions unresolved to encourage readers to buy future books, there's a limit to how much of that I am willing to put up with before it just becomes annoying.

The author has a lot to prove to many very unhappy fans with her next book. I hope she meet the challenge.
Read more
Helpful
Report abuse

barbara smith
4.0 out of 5 stars To short
Reviewed in the United States 🇺🇸 on November 15, 2020
Verified Purchase
I have read all the books in this series and really enjoy them but I've noticed the actual reading content is getting smaller. Discounting the chapter pages at the front and the lists of her other series at the back this "book" is about 135 pages. Not enough reading pages to warrant the price. This is a short story or novella at best
Read more
Helpful
Report abuse

Bella
4.0 out of 5 stars Mixed emotions
Reviewed in the United States 🇺🇸 on June 11, 2019
Verified Purchase
I’m a long-standing fan of Carlotta. I thought this books showed exceptional editing and story plot. I loved that Jack didn’t try to lead her on. Plus TEN points for Coop apologizing. Go team Coop! Bond did her due diligence to her devoted fans treating all with TLC . Such a well written and well executed themes. While it was a great book it was short and expensive, however I’m not an author and have no notion how much it costs to produce a good book. I will be waiting for the next book.
Additional edit; I also wanted to make mention that I loved that this book wasn’t about sex. It was about relationships.
Read more
9 people found this helpful
Helpful
Report abuse

Squeaky
3.0 out of 5 stars Unresolved
Reviewed in the United States 🇺🇸 on July 3, 2019
Verified Purchase
I really like Stephanie Bond's books - they are buy on sight for me. That's why I am giving 3 stars instead of following my instinct to give this book 2 or less. I know the Body Movers series is a collection of cliff hangers and that's okay since the books have always had some main story that gets resolved before the inevitable cliff hanger. This book - not so much.

Spoilers ahead:
Patricia dies - police say it's an accident, Carlotta suspects fowl play. No resolution.
Carlotta's dad is not Randolph - but who is he? Not resolved.
Wes' future - Med school or card sharp? Unresolved.
Wes' love life - Meg missing. No clue.
Quentin Gallagher - hired, but now no job. Carlotta doesn't seem to even bother.

I could continue, but why bother - not one story line in this book got resolved.

Please do better with the next Body Mover book, Ms. Bond. I would really appreciate it!
Read more
2 people found this helpful
Helpful
Report abuse

Yvonne
5.0 out of 5 stars Great Series
Reviewed in the United States 🇺🇸 on September 11, 2021
Verified Purchase
Such a great series! Hard to put down and keeps you wanting more. Carlotta has here hands full and I can't wait to see what happens next.
Read more
Helpful
Report abuse
See all reviews

Karen, Wolverhampton
5.0 out of 5 stars A fantastic series to read.
Reviewed in the United Kingdom 🇬🇧 on June 27, 2019
Verified Purchase
If you like a good murder then you'll love these.
With an underlying thread of mystery running throughout the series it often seems like Carlotta Wren can't catch a break and yet, with strong friends and not a little grit, our heroine makes it through to fight another day.
These books are not only well written but carry you along for the ride. A really enjoyable read so please hurry with the next.
Read more
Report abuse

Kindle Customer
5.0 out of 5 stars More please!
Reviewed in the United Kingdom 🇬🇧 on June 25, 2019
Verified Purchase
I have invested time and emotions into the lives of Carlotta, Wes, Jack, Coop, Hannah and the rest. Love all the twists and directions their lives throw up... Hurry with no. 11!!!!!
Read more
Report abuse

Valerie Hepburn 42
5.0 out of 5 stars wow
Reviewed in the United Kingdom 🇬🇧 on June 27, 2019
Verified Purchase
cant wait for the next book totally hooked. the stories and charactors are brilliant . couldnt put it down .
Read more
Report abuse