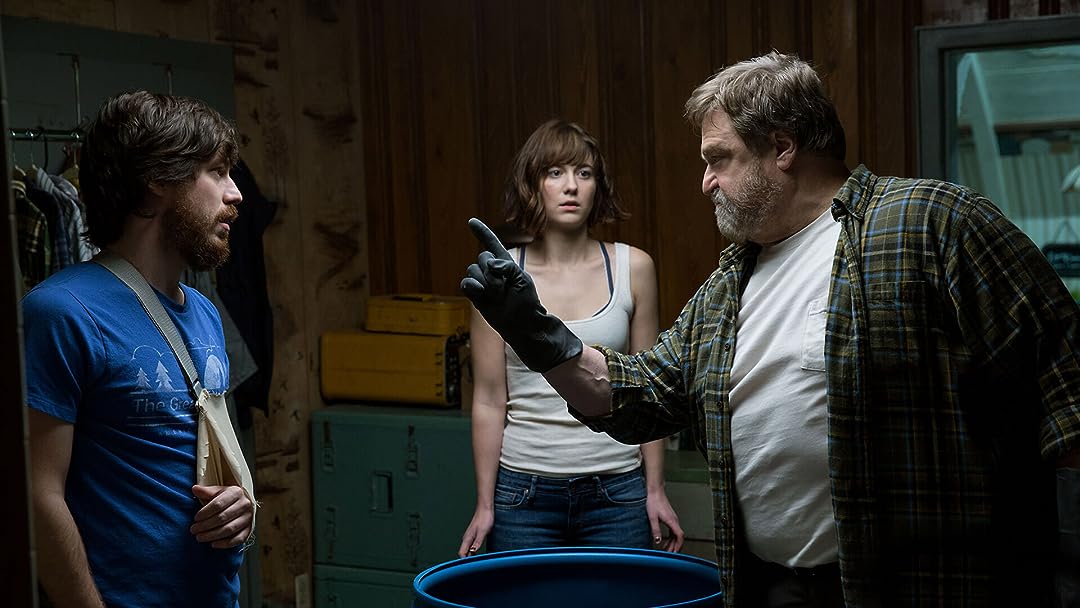 (9,224)
7.21 h 43 min2016X-RayHDRUHDPG-13
After surviving a car accident, Michelle (Mary Elizabeth Winstead) wakes up to find herself in an underground bunker with two men. Howard (John Goodman) tells her that a massive chemical attack has rendered the air unbreathable, and their only hope of survival is to remain inside. Despite the comforts of home, Howard's controlling and menacing nature makes Michelle want to escape.

lacilynnnReviewed in the United States on November 17, 2022
5.0 out of 5 stars
Keeps it Interesting
Verified purchase
Honestly, this was one of the most thrilling movies I've seen in awhile. I am usually pretty good at figuring everything out pretty early on, but even this had me pretty unsure up until almost the very end. It was a good time.
One person found this helpful

Stevie BrownReviewed in the United States on July 7, 2022
4.0 out of 5 stars
Surprise Ending
Verified purchase
In the beginning I believed John Goodmen was a bit out of his mind until the surprising twist at the end.
One person found this helpful

joel wingReviewed in the United States on October 4, 2020
4.0 out of 5 stars
Different take on post-apocalyptic genre
Verified purchase
Michelle (Mary Elizabeth Winstead) leaves her husband, gets in her car, ends up getting hit and wakes up in a basement chained to the wall. She finds out she’s being held by Howard (John Goodman) who claims he’s protecting her after an attack upon the United States. The movie is about the two being together in an underground bunker with Michelle not sure whether to believe Howard or not. Obviously being chained to a wall complicates their relationship right from the start. She doesn’t believe his story that America has been attacked, and Howard is controlling and scary at times. This creates an inherent conflict between the two and a much different post-apocalyptic tale than is usually told.

The movie does a good job with its pacing. It goes from high points to lows and then back up. Sometimes it seems like Michelle and Howard will get along but other times it doesn’t. The ending is also definitely unexpected.

Overall this was a surprisingly good thriller.

Maggie LReviewed in the United States on October 1, 2022
5.0 out of 5 stars
Some pretty unexpected events…..
Verified purchase
Good movie!
One person found this helpful

JsReviewed in the United States on June 22, 2022
5.0 out of 5 stars
Fun!
Verified purchase
Kinda silly to leave a movie review on Amazon but I really enjoyed this. I started watching it without any expectation except a vague sense that it might be like the movie Cloverfield (cuz of the similar title), which I didn't like, but I still went for it cuz I thought it was curious that John Goodman is in it. The movie leads you to believe it's gonna be a certain kind of story. Then it changes a bit and you think it's gonna be another kind. Then you're not sure, and finally you just enjoy the ride and see where it goes. I had fun.
One person found this helpful

rareoopdvdsReviewed in the United States on December 4, 2016
4.0 out of 5 stars
Do you even need an excuse for reality to true?
Verified purchase
I loved this movie. I really did. Well, almost. **SPOILERS**

It opens with a woman driving, having some disagreement with her boyfriend, and then a sudden car accident that leaves her unconscious, only to wake up in a mysterious and unwelcoming cellar room chained to a pipe. Is she kidnapped? What is going on? And that is basically where you are left up until the end. There are so many perception shifts in this film that you dont know what is real anymore. John Goodman plays a seemingly honest and good-intentioned person that he is helping this woman, not only back to life, but also from the supposed attacks going on above them (we discover she is in a bunker).

So here is where my SPOILER comes in. The ending. I loved the movie. I loved it to the end. Not the very end. But up to the point where she discovers what is really out there. And it changes everything that has happened before hand. Or gives clarity to it. Needless to say, once she discovers what is out there, does the film really need to go on for 10 more minutes? I felt as if this was a lazy extension told by producers to give the audience a little pizzaz. And I think it falls short by giving too much. Did she really come up with a molotov cocktail in the last 30 seconds only to throw it in the mouth ala Independence Day? Would she have survived the truck falling after the alien let go of it? Whether there was a war or not, just her getting out of the bunker and seeing the horror of the truth would be enough for the films end. Not the rest. So, that is why I give this 4 stars. Otherwise, a top notch film with excellent acting by everyone and well directed.

5 people found this helpful
See all reviews
Back to top
Get to Know Us
Make Money with Us
Amazon Payment Products
Let Us Help You
EnglishChoose a language for shopping. United StatesChoose a country/region for shopping.
© 1996-2022, Amazon.com, Inc. or its affiliates