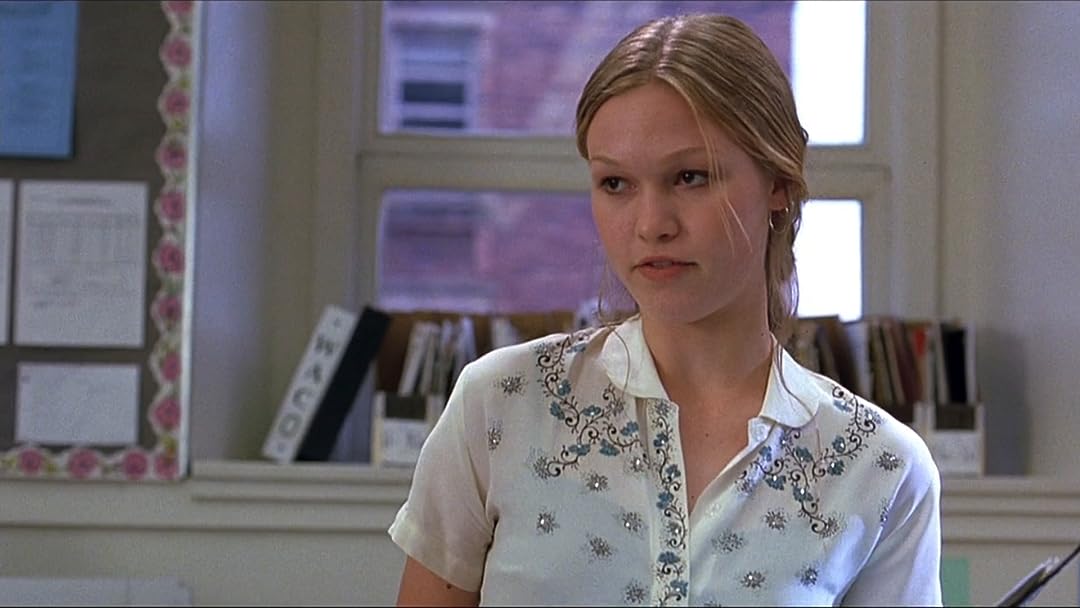 10 Things I Hate About You

WritergirlReviewed in the United States on February 14, 2020
1.0 out of 5 stars
Why does everyone like this movie?
Verified purchase
So, I was looking for a light-hearted, funny "high school" type movie. Maybe something kind of corny, but funny... like Clueless. This got tons of 5-star reviews. So... am I missing something? I usually like these cast members in other movies, but here they all seem to fall flat. Okay. I have to admit I've only watched 15 minutes of it... but I'm already bored and tired of hearing swear words. The guidance counselor is writing porn. The teachers say things like "bitch slapped" and the characters are so stereotyped. I get it. It's supposed to be funny, but somehow it just isn't. Moody angsty girl wants to read Sylvia Plath instead of Hemmingway. Nerdy new kid wants the popular girl. Sidekick friend to nerdy guy is telling him how out of reach popular girl is for guys like them. Popular girl is a ditz who loves her purse more than her shoes. Dad gives up his "no dating" policy, trading it for "you can date when your moody-hates-all-boys sister dates." It's just so unbelievable, and not in a funny way. It's just all so... boring. Sorry, don't think I'll finish this one. Can't seem to laugh at the humor or care about the characters.
16 people found this helpful

sixthreezyReviewed in the United States on April 2, 2019
4.0 out of 5 stars
10 Things I Hate About You - Can You Ever Just Be Whelmed?
Verified purchase
Sometimes I feel like destiny is guiding me through my movie collecting and watching, so much so that I appear to have bought and then subsequently watched this on the 20th anniversary of its release. I didn't see this movie when it first came out as I was a bit young, though I probably would have enjoyed it. When I finally did see it in my 20's I really enjoyed seeing some of my favorite actors at the time as younger stars. Julia Stiles hasn't been in much as of late, but she was in a few hit movies I recall from shortly after this film came out. However, this is an early showcase for the talents of Heath Ledger and Joseph-Gordon Levitt.

At this point, any movie that allows us the pleasure of experiencing Heath's charm again is worth your time. I think a lot of us forget that this kind of movie is where he came from because he died playing one of the darkest, craziest characters we've seen in modern film. Here he plays the cool guy at school, who is tasked with romancing the Julia Stiles character so that Joseph Gordon-Levitt can go on a date with her younger sister. JGL is so impressive to watch as it seems he was all but born for stardom, and is doing his own thing in Hollywood. He's really the main character of the movie, but Ledger truly steals every scene he's in.

It's understandable though why Heath Ledger would command the movie, because in order for all of it to work he really has to make you like him. He has to work over the image and reputation of a character like his, to make him redeemable by the end of the film. I think this movie does a great job of recognizing how kids this age speak and act, and does so in a way that the film barely feels dated even after 20 years. Sure they don't all have cell phones and tech, but they're all acting as I'd imagine teenagers do still to this day.

The film's story is really dynamic in that each of the male lead's plots play out in a way that could easily carry its own movie. In making the one relationship dependent on the other, they give the audience a lot to root for and watch in this classic 90's flick. This is definitely one of those films that I would consider an essential 90's classic, even though I didn't see it until the late 2000's. It has everything that made a movie of that time great, and it has all the charm and style of a 90's high school romantic comedy. There are plenty of Special Features and a commentary that is loaded with cast and the writers, who have a grand time remembering the old days.

This is the 10th Anniversary Edition so the commentary was done around that time and some of the bigger cast members were obviously in the middle of stardom. However, it was still really fun to listen to all of them reminisce and even kick themselves over their behavior as teens during the filming of the movie. There is a reason they tried to turn this movie into a television show, and there's also a reason that it didn't work. This movie has a great romantic comedy story filled with an all-star cast, one of which we will never see another performance from so it's been a really great revisit.

Blu-ray came in perfect condition and is a deal at the $6 price it's currently listed at. Highly recommended to those looking for a 90's fix or a revisit to a nostalgic classic!

CevanneReviewed in the United States on February 15, 2018
5.0 out of 5 stars
Love, love, love
Verified purchase
I love this movie, what can I say. They did everything right: the actors, the writing, directing, the humor, the way they filmed it, the music... should I go on? I watched some of the extras & they mentioned the school that totally looks like a castle fortress is a real building they filmed at--really? And it's not too far away, I'm gonna have to check it out. The guidance counselor that writes graphic romance novels--hilarious. I like that it was Bianca (the younger sister) that got to avenge, well everyone, by beating up the jerk. They didn't have someone come to her rescue. I cry a little when I watch it because I remember Heath is not with us anymore & that makes me sad, he was just brilliant & charismatic. Good fit w/Julia Stiles for this part. Great scene w/him singing & dancing up & down the bleachers to woo her.
25 people found this helpful

KatelynReviewed in the United States on September 9, 2020
5.0 out of 5 stars
Top 10 Movies
Verified purchase
Is it cheesy? Yes.
Is it cringy at times? Yes.
is it absolutely inappropriate at times.? **Hehe** yes.
Is it based on Shakespeare's "Taming of the Shrew?" Yes!
Is Heath hot, infuriating, and completely lovable? Hell yes!
Do I watch it at least once a week when I don't know what else to watch, and so because of that fact, I have pretty much the entire movie along with mannerisms, expressions, and even the songs memorized? **Clears throat** ABSOF*INLUTELY

In other words, buy it. Just do it. It's a classic and way better than Mean Girls and Clueless (I said what I said). As for the physical DVD itself, it came in and is still in great condition and has probably been through 100+ watches in the past three years...
4 people found this helpful

stuart1776Reviewed in the United States on August 13, 2021
4.0 out of 5 stars
Fun, but not all of it has aged well
Verified purchase
I saw this all those years ago when it came out in the cinema, and have always been fond of it, so when I saw this 10th anniversary reissue for only $3.99 I snapped it up. It's still a fun high school comedy, but not all of it has aged well (the 'white rastas' and Julia Stiles flashing her gym teacher to distract him so Heath Ledger can escape detention spring to mind). Yes, some of the characters are rather two-dimensional and are 'types' rather than fully fleshed out characters, but there's some witty dialogue and the soundtrack is equally upbeat and fun. So, overall, a nice bit of nostalgia, but today's teens might not appreciate it as much.
One person found this helpful

Leo HottReviewed in the United States on May 27, 2016
5.0 out of 5 stars
Great movie for any collection!!
Verified purchase
Since American Graffiti every generation has tried their hand at a coming of age story for its own generation. Some become instant classics, some cult classics & some go nowhere! "10 Things I Hate About You" while coming out in the late 90's is as ageless as its inspiration Shakespeare's Taming of the Shrew!!! It can be proudly claimed by that generation...but notice no Cell Phones & other than a few small things there is no iconic imagery tying this movie to a time frame or generation. The theme is eternal shattering all time barriers, its hard to beat " true love" for a theme!!! The stars certainly aligned when making this movie both in the Astrological since & the literal with break out performances from young stars that would grow to be endearing to the entire world!!! I bought this for my daughter who quickly convinced me to get this specific Anniversary Edition because of its bonus features & being a huge Shakespeare fan & loving " 10 Things I Hate About You" it didn't take much convincing on her part ! I was very pleased to see it offered at such a reasonable price. Great movie!
8 people found this helpful

HollysmessReviewed in the United States on October 9, 2015
5.0 out of 5 stars
charming, one of the best examples of its type
Verified purchase
I never saw this when it first came out. Of course all the young leads went on to well-deserved fame, and seeing Heath Ledger makes me even more sorry he's gone. This is a sharp, witty teen rom-com, risqué but not raunchy. There are some predictable tropes but for the most part the characters react to situations the way normal people would. Some of the themes/messages seem a bit dated fifteen years later, or maybe I'm just old enough to wince when the guy accuses the girl of being "selfish" because he's done all these nice things for her and she still doesn't want to date him. Yes she is selfish, but it's still not a great message when he wins her in the end. A bit more character exploration there would have helped. Never mind: the girls are still well-rounded, autonomous in their own right characters. I've watched this five times this year and still enjoying it.
8 people found this helpful

crumm86Reviewed in the United States on February 17, 2021
5.0 out of 5 stars
Ah, nostalgia.
Verified purchase
I had not seen this movie in several years, but it came up in conversation, and suddenly I wanted to see this film again. The anniversary edition was the perfect purchase, because the movie is the same quality you remember from back in the day, so you get that bit of nostalgia. I highly recommend taking a trip down memory lane with this movie and possibly Varsity Blues or She’s All That. You can buy both on here as well.
One person found this helpful
See all reviews
Back to top
Get to Know Us
Make Money with Us
Amazon Payment Products
Let Us Help You
EnglishChoose a language for shopping. United StatesChoose a country/region for shopping.
© 1996-2021, Amazon.com, Inc. or its affiliates