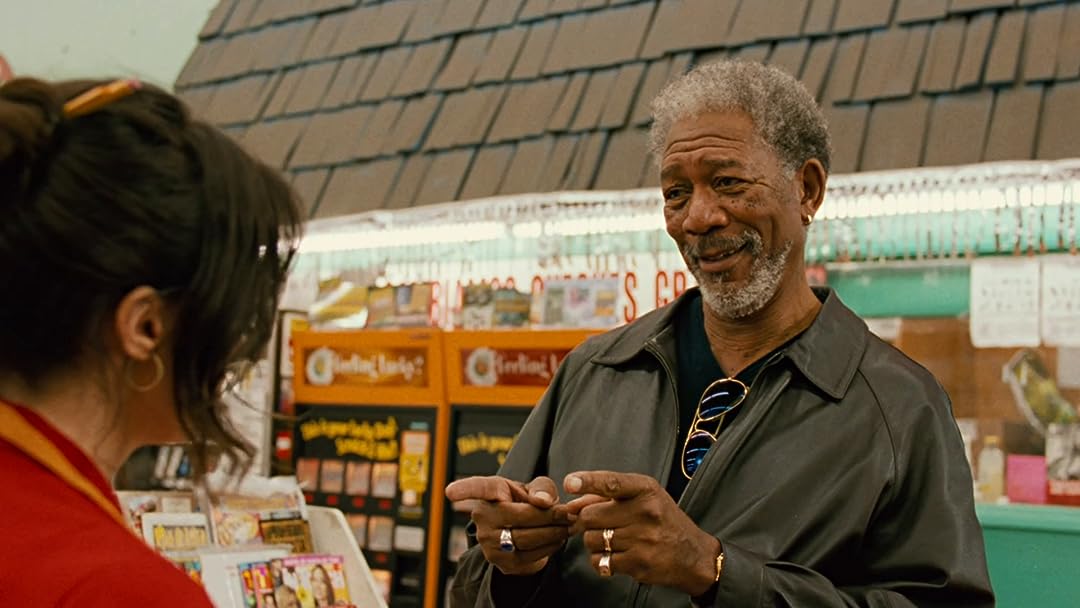 (201)
6.61 h 20 min2007R
An actor (Freeman) prepping for an upcoming role meets a quirky grocery clerk (Vega), and the pair hit the road to show one another their respective worlds.

ZorroReviewed in the United States on February 8, 2021
1.0 out of 5 stars
Don’t waste your time
Verified purchase
I love Morgan Freeman and Paz Vega and the story line was good. However I turned it off after 5 minutes because the ifiots in Hollywood think they can convince us that everyone uses the F word in every sentence. I worked in construction, maintenance and factories and I have never heard anyone use si many filthy words as Hollywood wants us to believe is normal.

I can’t comment on the entire movie because the opening should insult the intelligence of anyone.

Michael A.Reviewed in the United States on March 11, 2021
1.0 out of 5 stars
Slow paced, killed by terrible ending
Verified purchase
This is an OK story, hampered by an overly slow pace (for pseudo "dramatic effect") and killed by a terrible, rushed and unfinished ending.

Freeman's actor character touts a love for strong endings. Unfortunately the writer who penned that line does not. This movie is a simple look at a random and unlikely interaction between Freeman's successful actor and Vega's unsuccessful checkout clerk.

The slow pace could be forgiven as the interaction between the two on their afternoon adventure is mildly interesting and I did want to know if they both met their goals for the day. Unfortunately, this, as many character stories do, just simply ends. The viewer doesn't learn whether Vega's character succeeds or even if the impact her day with Freeman's character has a lasting impact or vice versa.

After seeing the pair become unlikely friends over the afternoon events, the ending simply ruins it and makes the viewer feel as though they'd wasted their time holding on through the slow pace, terrible music selections and several fast forward inducing moments to try and make their way to the end...only to find some lazy writer simply hung a "the end" sign on it and called it a wrap and some even more terrible producer and director accepted that nonsense.

Freeman and Vega are good and have great chemistry. The writer, editor, and director really did them a disservice. This movie should have been 10 minutes shorter and needs an actual ending to even be worth watching. Even if you're a fan of either actor (or both), skip this. It's simply terrible.

errin spellingReviewed in the United States on February 17, 2021
5.0 out of 5 stars
we were thrilled to have found this quirky comedy
Verified purchase
morgan freeman is great. he is playing himself, and is very funny. he washes cars at the car wash and plays pretend golf with a little boy. he is dropped off at a grocery to learn , for an upcoming film, he is thinking about doing and makes friends with the check out girl , in the 10 items or less line. she is a very old 25 and he is a young 70 something. they become great friends and go to arby's for lunch, because the dalai lama told freeman protein was important.
5 people found this helpful

Kelli SilvaReviewed in the United States on February 21, 2021
2.0 out of 5 stars
wasnt a fan
Verified purchase
love morgan freeman and the actress ive seen in other movies but this really wasnt good from my point of view
6 people found this helpful

Kenneth T.Reviewed in the United States on June 8, 2021
2.0 out of 5 stars
not very good.
Verified purchase
I mean, I watched the whole thing, so I can't give it a 1. But I really wanted to give this a 1 star. The ending upset me, but it upset me even more that they had made me want that different outcome even though I didn't want that outcome. It felt like they just left it unfinished and something that will haunt the clerk for ever. forbidden love, etc... Not for me. I wish I hadn't watched this... Maybe I just not smart enough to understand sleezy hollywood sex life marriage life. I dunno
One person found this helpful

GuinnessFanReviewed in the United States on August 29, 2021
3.0 out of 5 stars
Like Watching Paint Dry
Verified purchase
I Love Morgan Freeman movies, and the acting in this movie was universally good. (Actually my favorite performance was by Anne Dudek.) But the story line made this movie like watching paint dry. This was probably a thoroughly enjoyable book, but part of making a good movie is knowing which stories will translate well to the screen and which won't. This one just doesn't. The problem is not the genre either. I quite enjoyed The Magic of Belle Isle, which was of a similar type. Unfortunately, this movie just never really goes anywhere... at least not anywhere that makes the rather boring journey worth going through.

Not HappyReviewed in the United States on October 1, 2021
1.0 out of 5 stars
Creepy Old Man Stalks Young Woman
Verified purchase
An interesting concept that falls just short of the mark. This could have been a charming movie. But due to Morgan Freeman's body language, the audience is expecting him to grope the young woman at any moment. It's clear the female character is uncomfortable with his presence. Only a writer/director long steeped in an ethos of sexual exploitation of young women could fail to see this plot is a bad idea.

The core message here seems to be: Young women MUST tolerate stalking from powerful old men because it may ultimately benefit the old man in some way.