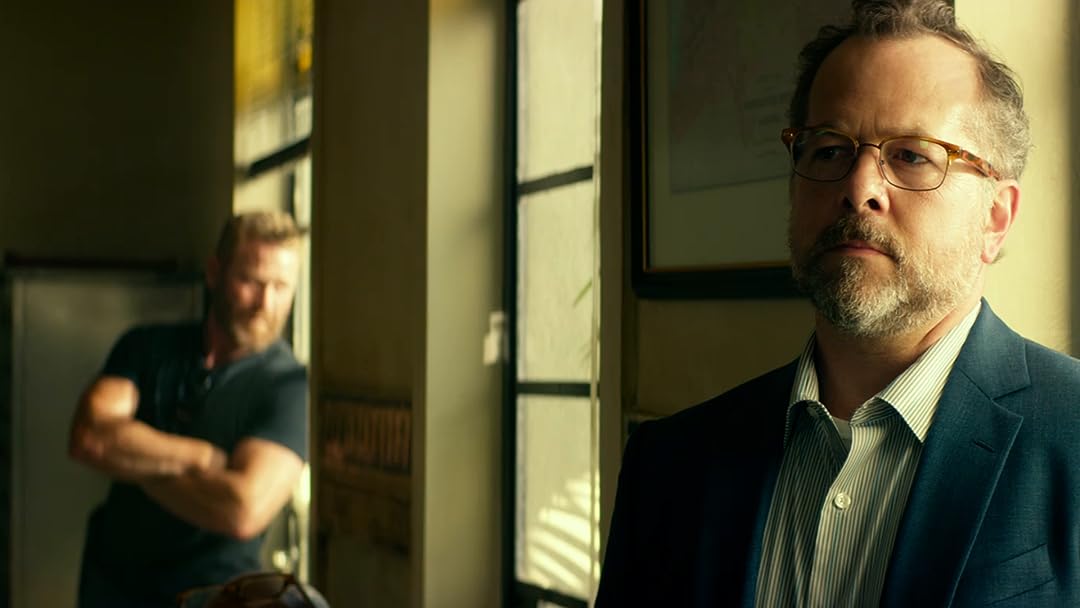 (31,327)
7.32 h 24 min2016X-RayHDRUHDR
From director Michael Bay, 13 HOURS is the gripping true story of six elite ex-military operators assigned to protect the CIA who fought back against overwhelming odds when terrorists attacked a U.S. diplomatic compound on September 11, 2012.

MoondoggReviewed in the United States on January 27, 2017
5.0 out of 5 stars
Powerful film about a tragic and controversial event.
Verified purchase
13 Hours does a phenomenal job of recounting the September 11, 2012 attack on the U.S. compounds in Benghazi, Libya. Regardless of the politics surrounding the Benghazi attacks, the film does an excellent job of examining the events that led up to the attack, as well as showcasing the heroism of the men that fought to defend American citizens. It gives a moving glimpse into the experiences of U.S. military personnel and the realities of combat.
I was worried that the film would be diluted by political commentary, but it isn't. The politics surrounding the event are touched on briefly, but are by no means a prominent theme in the film. It keeps the focus on the men that fought bravely to defend the U.S. compounds and save lives. Wonderful film.
316 people found this helpful

SHAY RONReviewed in the United States on December 7, 2018
5.0 out of 5 stars
Every American NEEDS to watch this.
Verified purchase
I'm the daughter of a Marine and have been around the military all of my life. My father served in Viet Nam and for all intents and purposes never returned. My nephews and stepson serve in different branches now.

This is not just a movie. This was made to honor and respect those who lost their lives during the Benghazi Attacks by those who were there and survived. It's not fiction, as much as I wish it were.

I say every American needs to watch this as it should never have happened, and should never happen again.
It's not easy to watch, especially knowing it's true, but 100%+ worth watching.
I was trying to hide that I was crying, but finally unable to do so, only to realize that my husband was crying as well.
God bless those lost with His mercies and God bless those who survived with His healing.
OUR countrymen deserve better than this to be part of our history. They were there serving in many different capacities, from INTEL to IT to PROTECTOR.

Poodle & NoodleReviewed in the United States on January 13, 2019
5.0 out of 5 stars
Everyone would watch this entertaining movie...to know truth about Benghazi
Verified purchase
Great movie! Very entertaining and accurate. I am a big fan of Kris Paronto, who fought and watched his friends die at Benghazi. Yes, our President at the time and Secretary of State, not only denied this happened the way it did, but they sent NO help despite repeated requests.
Judge recently ordered Hillary Clinton email/Benghazi Investigation be re-opened. Hopefully vindication will come, for the victims and survivors.
15 people found this helpful

KMAReviewed in the United States on January 31, 2021
5.0 out of 5 stars
Unbelievable in a good way!!!
Verified purchase
I don't want to come of as naive, although I might- but I had NEVER heard anything about this incident happening. My uncle had posted something about it on FB yesterday. I was immediately curious as to what this event was about. I Googled it and read up on the basics. Without reading anything more specific or read any reviews on on it, I went into the movie pretty blindley. I did see that John Krasinski was in it and recognized him from 'The Office". I loved his character on that show, a goofy, dopey guy with a dry sense of humor and witty comebacks. I had pretty low expectations of him portraying a believable soldier. However, his performance (as well as the other key soldiers) was SOLID. I've never (as I would guess 99.9% of the population hasn't) experienced the pressure, fearlessness and confidence an elite soldier must face minute by minute. Having to be "ready to go" and put their lives at risk for our country at any second, as well as their ease in preparing to fight the enemy was beyond impressive. War like movies are not my genre. Other than American Sniper, I've never had a desire to "pick" a war movie. I'm so glad I did. The entire movie and every aspect of it blew me away! I was tense and completely enthralled the entire movie and was was not able to relax within my body until it was over. It is a RARE movie in which I feel that way. There was never a time I felt I could leave the room for any reason without pausing it, I didn't want to miss a minute. I can't BELIEVE Jack's character would CHOSE to go over there- that he had that much pride in his duty and country. This is an event/movie I will not forget and will easily be able to recommend it with confidence to someone. I now want to know more about how all of this could happen and read up on this completely preventable?, horrible and sad 13 hour catastrophe (again I'm naive as to how often these enemy clashes occur). At times it was a complete slaughter house. Ugh....As they say, no man (or woman) shall be left behind....and boy did these soldiers fight with every ounce of their being until the very end putting in a 100% of effort. The timeline and minute by hour description that would pop up on the screen that I had to read quickly read while trying to figure out what was going on where/when, was hard to follow at times.....I think I need to rewatch the movie after I gather more information. I sure as HECK hope those families of the fallen soldiers are being well taken care of for the senseless loss they had to experience. Wow is all I can end with, just wow. And that doesn't even begin to do this movie the justice it deserves.
2 people found this helpful

Ken D.Reviewed in the United States on January 27, 2019
5.0 out of 5 stars
It's sad that this isn't on Amazon Prime for Free anymore.
Verified purchase
I have watched this... maybe 20 times. I will watch it 20 more. If you watch this thinking political thoughts; you are doing it wrong. If you don't watch this because of your personal political leanings; you are wrong too. This is a pure and simple attempt to give honor to the fallen who were stuck in a situation and did their best to survive. This movie is only about what it means to be human. And what it means to be human in the face of those who forgot.

Family of FiveReviewed in the United States on October 16, 2020
5.0 out of 5 stars
Amazing Movie! True Patriots that Saved Abandoned Americans at Great Cost to Themselves.
Verified purchase
I bought and watched this movie a few days ago. It had over 9,200 - 5 start reviews and an average from over 10,000 reviews of 4.8 of 5.0 stars.....all well deserved. A gritty, raw, non-glamorously filmed movie. A true story. I am a veteran and did one deployment to the Gulf but was never in real harms way. This movie shows courage, sacrifice, and the love of these fine soldiers for each other and love for their fellow citizens who would have been slaughtered if not for their unauthorized/unapproved rescue and protection. I was exhausted by the end of the movie. I will watch it again, I am sure many times, and will never forget many scenes and these six heroes. I wish I could thank them for their service and how they saved the dozens of Americans left to die by the powers that be. God Bless them.
2 people found this helpful

Obi WanReviewed in the United States on February 6, 2017
5.0 out of 5 stars
Good movie
Verified purchase
This was really well made. It's told from the vantage point of the military contractors on station at the CIA outposts in Benghazi. So they are the superheros and everyone else is either in their way or needs to be rescued. That's probably how the actual people the movie is based on saw things, so that's how the movie based on their witness statements is told.

The story is not political. Not in any way. The words "Hillary Clinton" are not mentioned a single time in the entire film. They aren't event eluded to. The closest this movie comes to making any political statement is having the characters refer to Ambassador Chris Stevens as 'the real deal' who actually cared about Libya and wanted to help the people there. They don't get into how he wanted to help or what he was doing to make it happen.

A lot of people think the CIA guys were poorly portrayed. I didn't get that at all. I think they portrayed everyone as having a different job to do. Each person was focused on their portion of the mission and when the military guys took charge because things were falling apart it took some time for the CIA guys to drop the mission they had dedicated a lot of time to executing. That seemed realistic to me.

I think if you are familiar with the story prior to watching the movie you'll follow along a lot better. This is a 13 hour firefight plus a few days of set up material condensed into 2 hours. So they are obviously leaving a few things out and glossing over other details. If you know the news story going in it's much easier to follow.

At the end of the movie, you'll understand why the reason the embassy was attacked does still, at this point, make a difference.
4 people found this helpful

Mark C. OlearyReviewed in the United States on January 19, 2017
5.0 out of 5 stars
Great re-enactment with tense scenes and superb acting
Verified purchase
While I feel sad in saying that I enjoyed the movie because it depicts circumstances that our government should have been better prepared for, I must say that it is an epic in terms of the acting, the filming, and the controversy around Benghazi. From the fierce determination of the contract warriors to protect American lives to the failure of our government, I gained a perspective about the events of the day and for that I'm grateful. The film delves into the emotions and human drama that enveloped the contractors and CIA staff who struggled to fend off the annex invasion and save Ambassador Stevens. The acting is very well done, and while some of the drama between the waves of attackers dragged on, I understand the Director wanted us to appreciate the physical, emotional, and psychological effects of fighting without government support. Some of the scenes are surreal as they reveal the close proximity of the fighting to the living conditions of the non-combatants. While I haven't followed closely all the controversy over Benghazi, I can still say the movie shows the heroism of our best and it makes me appreciate how much love our soldiers have for those of us who rely on them.
One person found this helpful
See all reviews
Back to top
Get to Know Us
Make Money with Us
Amazon Payment Products
Let Us Help You
EnglishChoose a language for shopping. United StatesChoose a country/region for shopping.
© 1996-2021, Amazon.com, Inc. or its affiliates