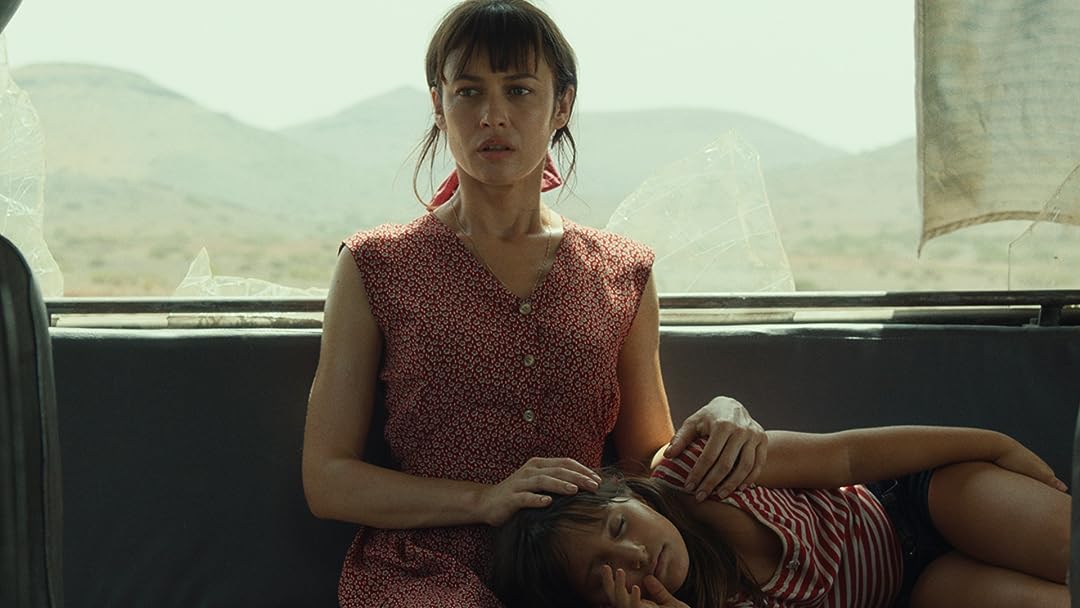 (322)
6.31 h 38 min2019X-Ray16+
Based on the 1976 true story of the Somalian rebel hijacking of a school bus of 21 French children. When diplomacy comes at a stall and time is running out, French captain André Gerval and his team of elite snipers carry out an attack to get the children and their teacher out safely.

Wallace GuyReviewed in the United States on August 23, 2019
3.0 out of 5 stars
Excellent throwback but historically flawed
Verified purchase
I loved this movie. Tense. Funny dialog. Heroic. It's a superb movie if you want to get swept up into tough guy heroics. The iconic character is "The Machine", laconic best-of-the-best Legionnaire who is 110% focused on The Mission and only under some duress admits he has children of his own.

To enjoy it you have to be willing to take the way-back machine, back when the Good Guys score relentlessly perfect head shots, even with pistols, and the Bad Guys drop like flies. It reminds me of those old WWII movies where John Wayne jumps out in front of 10 Nazi's and kills them all. But this is a much better crafted movie.

I notice that a lot of RT reviewers are upset by the white-on-black killing, and find the movie upsetting for it's failure to consider contemporary bipolar politics. I can understand that. It didn't bother me as I was watching it because it just reminded me of old movies as mentioned above. But the movie does take a very narrow point of view, Good Guy marksmen slaughtering Bad Guy Somalis. The world isn't so simple, but the movie is.

I'm not a big fan of "based on a true story" movies that veer substantially from the facts. In the movie the Legionnaires go cowboy against orders and fight heroically solo. In reality it was a lot more coordinated with the other French that were there. The hot school teacher wasn't actually there ... it was a female member of the Legionnaires who joined the children. If you can't make a true story true to the facts, pick a different story or make one up. Trading on "truth" to enhance the drama is cheap.

For what it is, I think it's well done. But it will only appeal to a certain mindset.

54mm NapoleonicsReviewed in the United States on January 11, 2021
5.0 out of 5 stars
Who needs to pee?
Verified purchase
A brilliantly funny moment in a very well-acted and written dramatic film based closely on an historic event in 1976. Minor changes in the story did not detract from the historical event, they allowed the story to be told and to convey it's many positions and nature.

Unlike what many detractors say, this is not a "racist" film in any way; terrorists hijacked a bus full of - and kidnapped - 30 CHILDREN with hopes of using them as hostages so that their demands of: fellow terrorists release, a referendum of the Djibouti Government would not occur, and the French would leave and not support the Government (thereby allowing the terrorists and, indirectly, Somalia to take over the territory).

Instead, the terrorists held one boy in Somalia proper, one 5 year old little girl was shot and killed by Somali terrorists as she ran to the bus driver - the same shot nearly blowing off his leg (later amputated) which caused him life-long disability, 7 terrorists killed, 20 more were wounded and between 1 and 7 Somali Government forces were killed (the Somali's were not sure, but they say it was not the single one that French claim), 5 children were wounded, 2 seriously - one a granddaughter of Legionnaire, she died of her wounds (2 children died, the boy taken to Somalia was later released); the female caring for the children on the bus was also wounded as was a Lieutenant of the Legionnaires.

The referendum proceeded and passed and, in 1977 (a year after the terrorists had tried to stop the referendum), by which the Republic of Djibouti was formed.
8 people found this helpful

Amazon CustomerReviewed in the United States on November 24, 2020
5.0 out of 5 stars
Great movie, but 20 mins of forced commercials imbedded
Verified purchase
Good movie, but it is like a TV broadcast, there are 5 forced breaks of at least 4 -5 minutes each of commercials. I pay for Prime movies to escape the commercials which totally kill the mood. There was NO INDICATIONS AT ALL when i was selecting this movie that was going to happen I was having a watch party and the commercials TOTALLY killed the vibe and I was embarrassed. I am going to contact AMAZON and if this is the way of the future I will leave Amazon Prime. Walmart has a comparable "Prime" service now.
4 people found this helpful

Randall ArnoldReviewed in the United States on September 10, 2020
1.0 out of 5 stars
Audio is NOT in English - AGAIN
Verified purchase
Well, ONCE AGAIN I looked at the summary of this movie, and it specifies the audio is in English. And once again, the audio is NOT in English. If I wanted to read subtitles, then I would just read a book. You cannot enjoy the visuals of a movie if you are stuck with your eyes focused on the subtitles. Seriously, how hard is it to properly fill out the movie summary Amazon? Do you not make enough money to pay competent people to fill them out properly? The entire Prime Video is a joke. Even when scrolling down through the different categories, you will see the same movies recycled over and over.
5 people found this helpful

Jethro WegenerReviewed in the United States on November 7, 2020
1.0 out of 5 stars
Well... that was a waste of my money...
Verified purchase
I knew this movie was in French.

And after lots of research, this appeared to be the only way to buy the film (I can't use Amazon prime as I'm not a US customer, so sod me for living elsewhere cause I don't get access to anything.).

This blu-ray said there were subtitles.

And I've bought German blu-rays before that also had subtitles in ENGLISH even though they were a foreign language film.

But for some reason, the makers of this sodding blu-ray decided it was a good idea to not only dub the film in German, but remove any English subtitles whatsoever.

And the only other copy of this film on physical media is by the same idiot makers as this one...

So if you don't speak German or French, don't buy this. Don't waste your money like I did.

And if you're not in the US and don't speak German or French, I guess you're in the same boat with me since we can never see this film in a language we can understand.

When are these freaking idiots going to realise that there are plenty of markets willing to pay for their stuff (like the movies on Amazon prime), but if they don't make it available, how can we do it?

Waste of my money. Time. Effort. And put major points into annoyance too.

Rant over.
One person found this helpful

Mr. Muh4kin ExQuireReviewed in the United States on February 17, 2021
4.0 out of 5 stars
Good enough
Verified purchase
Was a pretty good Film. I dont feel there were many boring moments. I get a sense and see some.similarities to the dramatic-action films from the USA. Despite the majority of this film being spoken in French you could clearly see the archetypal characters from the a US action film. They had the whole cool guy who doesn't same much and is stone sour, the moral leader with a dilemma, jokester, etc etc. Shluld be noted with such the archtypal character there are some (maybe cliche) scenes that are standard that you come across (ie the cool guys break into fist fight with the regular army guys and moral dilemma leader has his frustration yelling scenes with the suits because of his orders from Washington....I mean Paris).

While I felt it was pulling from US dramatic-action military films it prob wouldn't be the best from a US persprctive because it seems to have had modest budget base on the lack of "tacticool" (and in the US films pro-militarized sexy propaganda) B-roll cinematics or montages while some sort of Creedence Clearwater Revival - Fortunate Son or other war song plays.

As for downsides. I would've like Olga Kurylenko'd character to have been replaced. Dont gr time wrong she did well in her sundress role. Though hearing her say 'I'm American' with her Slavic accent is LOL. There surely is enough Quebec-Canadians or French-Americans who can speak with a passing American accent and French. I also say the inverse for the American CIA who had a perfect American accent but I'm sure didn't speak French well by how much he had to speak in English. I also understand the film is only 'inspired by' so I shouldn't nitpick but I doubt the Special Forces guys lined up all in one location and did a tandem shot and then.began to lay covering fire with their sniper rifles against heavy automatic fire.

C. U. LaterReviewed in the United States on March 21, 2021
5.0 out of 5 stars
Real heroes, wherever they may be !
Verified purchase
First and foresmost, this is an excellent movie which has renewed my perspective on what real heroes are supposed to represent.

There is no shortage of thugs on the planet, including some in uniform and it was very refreshing to see something that potentially had a renewing effect on humanity.

I've read many similar books and watched related movies, but this movie rises to the top.

Fake bravado and fake, loud, arrogant sociopathic "heroes" litter our modern day landscape, and even if this movie takes a few liberties, the core of what happened is worth trying to understand.

Compared to modern day, over-the-top action movies, this one excels in the simple fact that everything that was shown is realistic in its execution.

Also like in modern times (as it was then) the spineless politicians and bureaucrats only make things worse.

Inaction is not action !

Lastly, if you don't speak French, there is minimal dialogue so don't let the subtitles prevent you from watching this exceptional portrayal of real events.

Thank you to those real heroes, wherever they may be !
One person found this helpful

George M. SemelReviewed in the United States on January 4, 2021
3.0 out of 5 stars
Not terrible, but not great either!
Verified purchase
Calling junk rifles from World War II with questionable mounts and optics sniper rifles long with cluttered reticles is a real stretch for anybody than knows a little about rifles and shooting in general. In 1976 there were lots of good rifles for the purpose. The Idea that this Unit back then would choose worn out junk and suspect sights is laughable. The handguns they do use are pretty much hand build 357 Magnums. An out of the box Remington 700 bull barreled 308 Winchester from that time frame and a fixed 6 x 42 mm Leupold sight is a better rifle than the junk guns in this movie. Either they didn't have the budget- looks like they didn't. Or they didn't bother to do the research into the even and actually talk to some of the individuals that are still alive. Watch this movie with the suspension of disbelief. My guess that Unit started out with the best rifles and sights money could buy and not junk cast off guns!
See all reviews
Back to top
Get to Know Us
Make Money with Us
Amazon Payment Products
Let Us Help You
EnglishChoose a language for shopping. United StatesChoose a country/region for shopping.
© 1996-2022, Amazon.com, Inc. or its affiliates