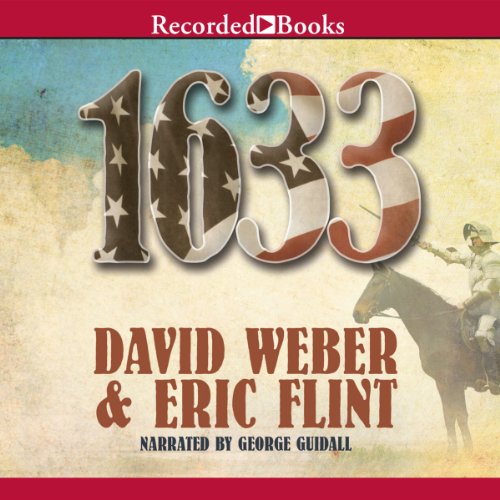 New York Times best-selling author Eric Flint’s 1632 presented listeners with a fascinating alternate history of the Thirty Years’ War, through the eyes of a West Virginia community tossed back in time to 17th-century Germany. Here, Flint teams up with acclaimed science fiction author David Weber to continue his epic tale. In 1633, the West Virginians attempt to use their modern-day knowledge to build a resistance against the forces of France, Spain, and England.

Your audiobook is waiting!
Learn more about membership
List Price: $41.99
You Save: $5.25 (13%)
By completing your purchase, you agree to Audible’s Conditions Of Use
Sold and delivered by Audible, an Amazon company

David.
5.0 out of 5 stars all over the map!
Reviewed in the United States 🇺🇸 on October 15, 2022
Verified Purchase
While the first book sets the stage, this part in the saga can truly be described as the real beginning of the whole series when many characters come into their own.

Charles Kovacs
VINE VOICE
4.0 out of 5 stars Good book for those "locked down."
Reviewed in the United States 🇺🇸 on October 30, 2020
Verified Purchase
1633 is the second book of an immense series with literally dozens of books, short stories, etc. covering the years after 1632. These books are all about an alternate universe that started in 1632 when a small town of West Virginia hill-billies (the author's description) was somehow transported into North Germany smack in the middle of the Thirty Years War. 1632 was definitely a five-star book, improbable of course, but exciting, non pc, and accurately researched. I remember reading it almost one sitting when it first came out.

1633 is also highly educational and interested readers will easily learn a lot about what happened in W. European history during a very complex and important period. Still, all this education does slow down the book, even as the political situation becomes ever more complicated. Moreover, the author chose to expand the story from N. Germany to France, England, Scotland and the Netherlands and of course with still more history lessons. Although this is a long book, the action on so many different stages does not always hang together, not to mention the absence of explanations for simple things e.g. how did an "embassy" simply get to Paris from N. Germany in 1632-33, given the geography and the wars in progress.

All this said, 1633 is a good book, slower than 1632, but good. It might have been better had the authors taken a more balanced view of the aristocracy and governments of the period. Instead, they indulged in too many high school cliches against oligarchic and/or absolute rule. This was cute up a point, but unfortunately it was also repetitive. Readers familiar with 17th Century European history will be probably annoyed; I was and I am not even all that familiar.

In the Afterword, Mr. Flint explains why he chose to have a co-author, i.e. Mr Weber, a writer most famous for his interminable Safehold series. While I understood Mr Flint's points, I do regret that he did not continue with this series on his own. As it is, his first book was clearly better than 1633, but more importantly it has spawned an entire franchise with quite a few authors writing about different years and different countries within the 1632 universe. Depending on how long the virus related lockdown lasts, the 1632 universe is great for escapism that encourages thinking about history. For readers not inclined in this direction, I would suggest reading only 1634-The Baltic War as that will bring this story to a logical resting point.
Read more
4 people found this helpful
Helpful
Report abuse

Potluck Queen
5.0 out of 5 stars Excellent twist on a classic story line.
Reviewed in the United States 🇺🇸 on April 9, 2016
Verified Purchase
I tend to write long reviews, but since much has already been said, here is my own little addition...

I find the history interesting and well construed. The what if this then this is great. The people real and three dimensional. I enjoyed the different perspectives & development of existing characters. Not everyone seems to be thrilled with Mike Stearns here without being in outright opposition to him.

NICE plot, puts meat into it, things do not just occur, the why & how is given. Character also grow, & story flows. A most enjoyable read.

Once you read 1633 I would recommend reading he Grantville Gazettes I, 2 & 3 beforee going on to "1634 The Baltic War" as there is some background information in them. If you like the historical aspects of this series I think you will enjoy the "Gazettes" as they also have articles on the reality of the 1632 universe.

Below is a reading order list taken from Eric Flint's website to help you navigate this universe.
1632
Ring of Fire
1633
1634: The Baltic War

(Somewhere along the way, after you’ve finished 1632, read the stories and articles in the first three paper edition volumes of the Gazette.)

(Somewhere along the way, read the stories and articles in the fourth paper edition volume of the Gazette.)

(Somewhere along the way, read the stories in Gazette V.)

(Somewhere along the way, read the stories in Gazette VI.)

(Somewhere along the way, read the stories in Gazette VII.)

Kindle Customer
5.0 out of 5 stars Alternate History
Reviewed in the United States 🇺🇸 on June 12, 2022
Verified Purchase
Superb writing. My problem at my age is that my favorite authors either are deceased or don't write fast enough. This series. Solved all that.
Read more
One person found this helpful
Helpful
Report abuse
See all reviews

Carrick
5.0 out of 5 stars 1632- Part 2: GREAT
Reviewed in the United Kingdom 🇬🇧 on December 30, 2019
Verified Purchase
Hard not to get addicted to Great Sagas so well done as this. So few are worth the effort. This is a HUGE saga; Baen and Eric Flint have been very clever developing it. They have enlisted a lot of talent to build it with them. This is still all Eric Flint. If you are worried about how much of this to invest in (and some of the books in the series get mediocre reviews), the 1st (1632) + 2nd (1633) + 3rd (Baltic War) + Compendiums 1-2 ('Ring of Fire' and Grantville Gazette vol 1') are definitely worth it. The biting intelligence, HUGE cast of 3-D fully fleshed characters and epic challenges are well written, perfectly described and amply illustrated with historic examples and in-depth knowledge that never fails to impress. I defy anyone not to be impressed, and most to be tempted further: The scope of this work deserves it! The depth of thought given to this work is well demonstrated by the respect the author accords even the enemy (many enemies) in the depth of character and detailed writing. A feature that makes this eternal despite the odd time travel premise, is the ethics and social depth applied to the narrative. If only the 1630s had had the benefit of 400 years of academic work in the fields of morality, theology, economics, politics, psychology and government at this time. It is not about the tech, this is much cleverer than that.

Ms Jane Pagler
3.0 out of 5 stars Where were the women?
Reviewed in the United Kingdom 🇬🇧 on April 16, 2022
Verified Purchase
1632 was very egalitarian and feminist in the way that women were at the heart of the novel. I thoroughly enjoyed it and know that several friends bought it on the strength of my recommendation. I started 1633 with great enthusiasm, hoping for the same refreshing challenge to the genre.
What a disappointment! It’s taken me twice as long to read this ‘boys own adventure’ as it just didn’t hold my attention.
Think I’ll look carefully at the plot synopsis before I read another one…
Read more
Report abuse

DavidMatthewson
4.0 out of 5 stars Better than expected
Reviewed in the United Kingdom 🇬🇧 on October 4, 2020
Verified Purchase
1632 and on is an alt hist series of many (20+) books, set in Europe during the 30 years war but with the added interest of a bunch of gung ho Americans thrown back in time, along with their town. Total tosh but very well researched in terms of real historical figures and tech and immensely enjoyable.
Read more
Report abuse

Shackman
5.0 out of 5 stars Alternate History
Reviewed in the United Kingdom 🇬🇧 on August 4, 2013
Verified Purchase
I will freely admit I enjoy science fiction and alternate history novels, and this is one of the beter ones. The writing style is easy to read and tells an (initially quite implausible) story well. David Weber has obviously done a lot of research into the history surrounding this area of Europe and the 100 years war, and gets a feeling of the time across. The only downside of the kindle edition is that I found the maps of the area too small to read. Nevertheless I look forward to reading the next one of the series.
Read more
Report abuse

P Smith
5.0 out of 5 stars 1632-6 / Ring of fire / Grantville Gazette etc.
Reviewed in the United Kingdom 🇬🇧 on April 5, 2019
Verified Purchase
Probably the most entertaining series of books in the last decade. I have read over 20 of the novels / short story collections / spin off's This being the one that set me off, and I am eagerly awaiting the next installments.
Read more
Report abuse
See all reviews