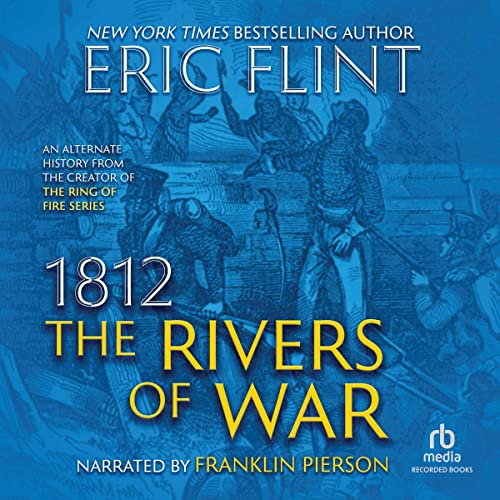 In this alternate history of the American frontier and the Jacksonian era, a small change takes place in the Battle of the Horseshoe Bend during the War of 1812. What results is a cascade of new developments that becomes an avalanche. In our world, Ensign Sam Houston, just turned 21, led the charge on the creek barricade in that battle and almost died from a terrible wound that took him a year to recover from. In this world, his wound is minor, so he is able to continue fighting the British—and develop his close relationship with Andrew Jackson much sooner.

Along with a radical Scots-Irish immigrant in the U.S. army, Patrick Driscoll—one of “the Men of ’98”—Houston organizes a defense of the U.S. Capitol that prevents the British from destroying it and makes him a national hero. He and Driscoll then play a central role in the defense of New Orleans under Jackson's command. They change the course of that battle in ways that will, over time, transform the relationship between the United States, the Indian tribes of the south, and the slaves brought over from Africa.

DogFace
5.0 out of 5 stars Author always does his homework
Reviewed in the United States 🇺🇸 on November 17, 2022
Verified Purchase
While on the face of it, this is "alternate" history, it appears well researched and reflects the challenges and mores of that day. Issues presented (conflicts of societies) exist to this day, and the book adds the benefit of perspective for us now. And it's dang well written. We'll miss Mr. Flint.
Read more
Helpful
Report abuse

Bonny Fuller-Fells
5.0 out of 5 stars Alternative history of War of 1812
Reviewed in the United States 🇺🇸 on November 17, 2022
Verified Purchase
Sam Houston was part of Jackson's army in the war of 1812. As a man adopted by the Cherokee, he thought native Americans had fights too.
Read more
Helpful
Report abuse

Gary Perry
5.0 out of 5 stars Want more
Reviewed in the United States 🇺🇸 on November 1, 2022
Verified Purchase
Both 1812 and 1824 are excellent books would like more
Read more
Helpful
Report abuse

Kindle Customer
5.0 out of 5 stars I'd forgotten how good this author is
Reviewed in the United States 🇺🇸 on September 10, 2022
Verified Purchase
A really good book by an old favorite author. I liked it so much I put some effort into getting the squeal in paperback, because I couldn't have it on Kindle, Right Now.
Read more
Helpful
Report abuse

Freida D. Slater
5.0 out of 5 stars Great series
Reviewed in the United States 🇺🇸 on August 31, 2022
Verified Purchase
I can not wait until the next book! Sweeping look at a little known time in America ! What if....
Read more
Helpful
Report abuse

C. Perelli-Minetti
3.0 out of 5 stars A little too anachronistic….
Reviewed in the United States 🇺🇸 on August 23, 2022
Verified Purchase
It was a good yarn, well-told, but…unusually for Flint, whose work I’ve long enjoyed, there was a little too much anachronism…in this case, in the form of looking at history through the present and putting modern attitudes and language into his protagonists, showing them well and contrasting them to those whose words and attitudes were more typical of the time. …Not that there weren’t those who mixed well with the Native Americans and even blacks, but as an historian who’s read much of the narratives and literature, this just didn’t ring true - even if the events themselves seem plausible.
Read more
2 people found this helpful
Helpful
Report abuse

Charles van Buren
5.0 out of 5 stars A splendid novel of alternate history
Reviewed in the United States 🇺🇸 on August 10, 2017
Verified Purchase
Unlike most of Eric Flint's novels, this book is strictly alternate history, no science fiction at all. This is a splendid novel for those of us interested in the War of 1812 (sometimes called the Second American War of Independence), the Creek War and the events which led to the Indian Removal Act and the Trail of Tears. Things go much better for both the Indians and black slaves in this alternate world even though the Creeks still lose at Horseshoe Bend. In addition to Indian affairs, the novel also deals with the conflicts which eventually led to civil war. Mr. Flint paints Henry Clay, the Great Compromiser, as one of the villains of the piece rather than as a great statesman. The Clay in this book is portrayed as John Randolph is commonly thought to have said of him, "He is a man of splendid abilities but utterly corrupt. He shines and stinks, like a rotten mackerel by moonlight." If you have no interest in American history, this novel may not appeal to you despite plot twists and vivid action.

If this subject is of interest to you, Michael Aye has written a very good historical novel concerning the War of 1812 in the south. THE BATTLE AT HORSESHOE BEND skillfully blends historical figures with Mr. Aye's pair of fictional main characters from whose point of view the story is told. This novel and Aye's novel of the Northwestern campaign, WAR 1812 REMEMBER THE RAISIN, are both available from Amazon.
Read more
3 people found this helpful
Helpful
Report abuse
See all reviews

Mike Turnbull
5.0 out of 5 stars A very deep book to read
Reviewed in the United Kingdom 🇬🇧 on September 29, 2015
Verified Purchase
This book was bought for a friend and he tells me that it was a little heavy going but feels it would be more appreciated if other books from the same series were also read.
The quality of the book it self along with delivery was perfect.
Read more
Report abuse

David W. Wildeboer
4.0 out of 5 stars Great Alternate History
Reviewed in Canada 🇨🇦 on August 27, 2010
Verified Purchase
Oh my, how history could turn! One little event (described by Flint in his afterword) could have made a huge difference in American history - and Canadian. This alternate history takes us back to The War of 1812 in which Canada (essentially, Britain helped :) ) beat the US of A. However, one small event could have led to a much different outcome.

This was the first of Mr. Flint's books I have read. I found it to be very good with complex well developed characters, historically accurate to their beliefs and views for those who really lived, and in the vein of the best Turtledove stories too. The events and the course change history makes is believable and it's very interesting. Knowing there's a sequel (1824: The Arkansas War - I bought both at the same time and read them back-to-back) definitely kept me interested to the end. The action is fast paced, the politics is well described and not laborious and overall this (and the sequel) are very well written books. Bring on the further story!
Read more
One person found this helpful
Report abuse

Trevor B. Owen
4.0 out of 5 stars Interesting Historical Insights
Reviewed in Canada 🇨🇦 on May 24, 2016
Verified Purchase
Insightful commentary into the War of 1812 era. One has an empathetic approach particularly to indigenous perspectives but not at the cost of how Americans themselves thought of the issues at the time. Worth reading.
Read more
Report abuse
See all reviews