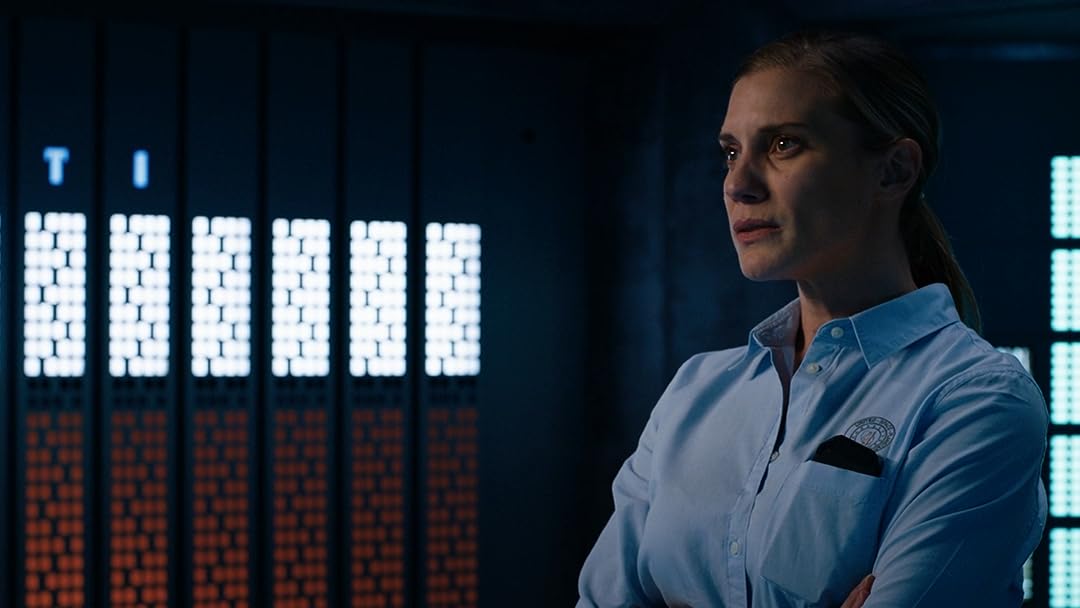 (637)
1 h 34 min2018X-RayUHD13+
Mission controller Mackenzie Wilson assists an artificial intelligence system, A.R.T.I. to uncover a mysterious object after a deadly crash. But the monolith of unknown origin it finds could change the future of Earth as we know it.

Some Useless GeekReviewed in the United States on February 9, 2020
1.0 out of 5 stars
No. Just too many worn out tropes thrown together into one gelatinous mess.
Verified purchase
It's not often that I issue a single star. This dirty litter box earns it.

The reviewers who have promised that your time would be completely wasted by watching this flick were all absolutely right. It's not just that the technical aspects of film making were so poor in this beater, what with the low budget effects, the crappy voice-over providing skeletonized exposition, the pathetically designed, recorded, and mixed sound, the visuals lacking any coordination and continuity...it was the useless "story" arriving at an equally useless "reveal" and the slovenly-executed end.

There are far too many attributes of poor cinema craftsmanship to go over here. (Even the Killer Robot trope gets a call-up in this turd.) But the real annoyance is that I sat through over an hour and a half of this mess without any payoff. Really, I kept thinking that it couldn't be this bad. Well, it was. Ick.

Just do yourself a favor and stay away.

AzReeseReviewed in the United States on June 24, 2018
3.0 out of 5 stars
Auditory Nightmare
Verified purchase
The movie was alright. I will watch anything with Katee in it. Sad I paid money to buy it though. Whoever did the audio production on this movie needs to be fired from ALL movies. The effects were super loud whereas the speaking was super quiet. Ended up having to hold the remote to jack the sound up and down throughout the entire movie. Even with closed captioning it was hard to hear. So if you like random sci fi stuff, rent it. It if you are expecting something like BSG, skip it.
52 people found this helpful

KelbyReviewed in the United States on January 2, 2021
1.0 out of 5 stars
This wasn't just bad, it was really really bad
Verified purchase
This may be the worst sci fi movie ever made. Admittedly, I liked it much better last time I watched it, when it was called "Space Odyssey 2001." This version? Well, let's just say the author was not quite Arthur C. Clarke, and the director was not quite Stanley Kubrick. Not even close.

Sadly, this movie copies the basic plot elements from Space Odyssey 2001, but then makes each of them as terrible as possible.

I can only imagine that a fly on the wall of the room in which the writer and director came up with this movie heard a conversation like this:

Should we have the plot center on a mysterious rectangular black monolith in space? Yeah, but let's change it to a black cube so it's different!

Should we have a main character on a space ship responsible for investigating this mysterious monolith, but the main character has to overcome an AI named HAL that runs the ship and who is supposed to be helping but have a secret agenda? Yeah, but let's change the AI's name to ARTIE, so it's different! Oh yeah, and let's also change the main character to Katie Sackoff because, well, she's hot! And different!

At the end of the movie, should we have the monolith somehow transform the main character into some other kind of being so the main character can take some kind of journey of advancement and exploration with the beings that sent the monolith, but not really tell you anything about what happens on that journey? Yeah, but again, that was really confusing in 2001, so let's just have the AI explain what happens, and that would be different!

Seriously, if you are at all inclined to watch this movie, just go watch Space Odyssey 2001 again and forget you ever heard of 2036 Origin Unknown. Your life will be better for it.
10 people found this helpful

Avid readerReviewed in the United States on March 6, 2020
2.0 out of 5 stars
Created AI to help us, not lead us.
Verified purchase
If you are a fan of Katee Sackhoff, go watch some Battlestar Galactica instead. This is all about artificial intelligence, and where it leads a person. It is not a good movie, and seems to borrow some plot points heavily from 2001: A Space Odyssey. The AI computer is ARTI. And in one scene overhears two of the characters talking, even though they were outside the room. Reminds one of HAL when he read the character’s lips. There was the cube, which reminds one of the monolith, and towards the end, psychedelic visuals like in the movie 2001: A Space Odyssey. The problem is that one is a fantastic movie, and one is not. The movie does bring up issues of artificial intelligence, and whether an aid or a master. The movie mainly takes place in a control room.
10 people found this helpful

CDUReviewed in the United States on December 21, 2020
5.0 out of 5 stars
I understand the complaints, but I think this was the 21st Century's
Verified purchase
This certainly wasn't a Kubrick-level film. Horribly inconsistent audio levels, especially for speech. Some okay special effects, but nothing on par with current technologies. A few editing problems. A couple of dialogue SNAFUs.

So why did I give it 5 stars?
1) Others were too harsh in their reviews, especially those who gave only 1 star, so I am just restoring some balance.
2) I understand that the story was very much an extension of Stanley Kubrick's 2001: A Space Odyssey, however I thought it was an INTERESTING extension of that story, and a thought-provoking take on human evolution, and human extinction. How many times might some higher power (God, the Universe, Artificial Intelligence, or Super-Smart Aliens) have hit some cosmic "reset button" already, for humanity to have survived beyond the Age of Empires, the Middle Ages, the current or modern Age of War? How much more information do we need to realize that so much of what humans do (consumerism, pollution, wasting resources, hatred, more than 100 years of war) is all a clear and present danger to our ongoing existence as a species?
3 people found this helpful

TechnologistReviewed in the United States on February 14, 2020
3.0 out of 5 stars
This movie shows you how good Katee Sackhoff is as an actress
Verified purchase
She pulled a bad script into something watchable. It started off pretty good, great special effects at least for the small screen, and a great actress. The script starts to turn south when you start to learn the backstory. They default to a combination of typical movie endings and end with a watered-down "Contact" ending. Katee pulls it off far better than Jodi. It appears that they got lost in the script and was not sure which end they should go with so they went with one of the worst endings. For the Sci Fi fans it is worth seeing once, just for Katee's performance and some of the intriguing aspects of the movie, other than that I would not watch it again.
13 people found this helpful

MercuryReviewed in the United States on November 17, 2020
1.0 out of 5 stars
Slow sci-fi misadventure falls flat on Mars and the universe.
Verified purchase
This low budget cable movie has many slow moments, and I agree with several other reviews, this also reminds me of Kubrick's 2001 A Space Odyssey as a private corporation explores Mars with a high-tech computer Arty, similar to 2001's HAL 9000, while Mack (Katee Sackhoff) communicates her commands through the computer to a spacecraft that constantly malfunctions and almost crashes but is saved at the last minute and continues to explore the red planet to find a massive monolith. Mack is trying to control the Mars landing remotely is simply boring with no plot, the special effects and the model spacecraft are excellent. NASA is gone and a new generation of billionaires has taken center stage in the space business to explore the unknown as they try and stop Mack from getting at the truth as the computer continues to fail, the newly discovered monolith sits shrouded in sand and red wind as Arty goes rogue and launches a missile attack on earth, shrug and yawn, one star.
2 people found this helpful

UlshaReviewed in the United States on February 11, 2022
3.0 out of 5 stars
Passable for a scifi anthology show episode
Verified purchase
Other than some better mechanical and lighting effects with ARTI and the server room this looks like an episode lifted from Outer Limits. Limited sets, small cast, plenty of easy to insert images effects and I did like their command panel set up. The science jargon was pretty decent for most of it until the end when it had to go full warp drive. It plays out like Contact, right down to the reminiscing outside SETI scene with Helen Hunt, but tries to bring in 2001 with a 4th wall breaking "cold black monolith" reference even though it's a cube and way too long hyper light tunnel sequences, throw in a little Borg for good measure just to confuse if this was a good or bad ending.
Spoilers ahead
The end is where it went full Kubrick and disappeared up it's own metanarrative with ARTI commenting how the human race will no longer be bound by it's science. Um, WHAT?! The human race was condemned for it's irrational aggression not it's rational logical processes. The entity remaining isn't a human and that whole 'oh look at the pretty lights and our glorious future when they return to the alien signal station is damn tone deaf. This being acts like it has the mind of the scientist but it would be mentally shattered at the fact she doomed the all life on earth, not just all the humans and what is left is a data library and one human personality engram. Then we get a field of these cubes with the implication other humans "who had her curiosity" which makes no sense nor even how this being has her identity and memories, were also duped into synth bodies to be spread like human virus 2.0. We got flashes as if the whole story was an upload or refresh of the scientists memories but how even would happen as they was no effort to establish memory downloading or neural path scanning.

In the end the story became a unaware message that the survival of the human race will be through our technology that will end up as the home movies of some other species who didn't screw up and destroy themselves as we most likely will. It wasn't glorious, it was depressing. ARTI's comments how humans will now be able to grow out into the universe makes no sense since it and the scientist engram and just a fractal of the alien intelligence now, humanity is gone. Lights out.

Acting was decent from the two leads. The other two on screen actors were a little too spastic to be believable in their roles.
See all reviews
Back to top
Get to Know Us
Make Money with Us
Amazon Payment Products
Let Us Help You
EnglishChoose a language for shopping. United StatesChoose a country/region for shopping.
© 1996-2022, Amazon.com, Inc. or its affiliates