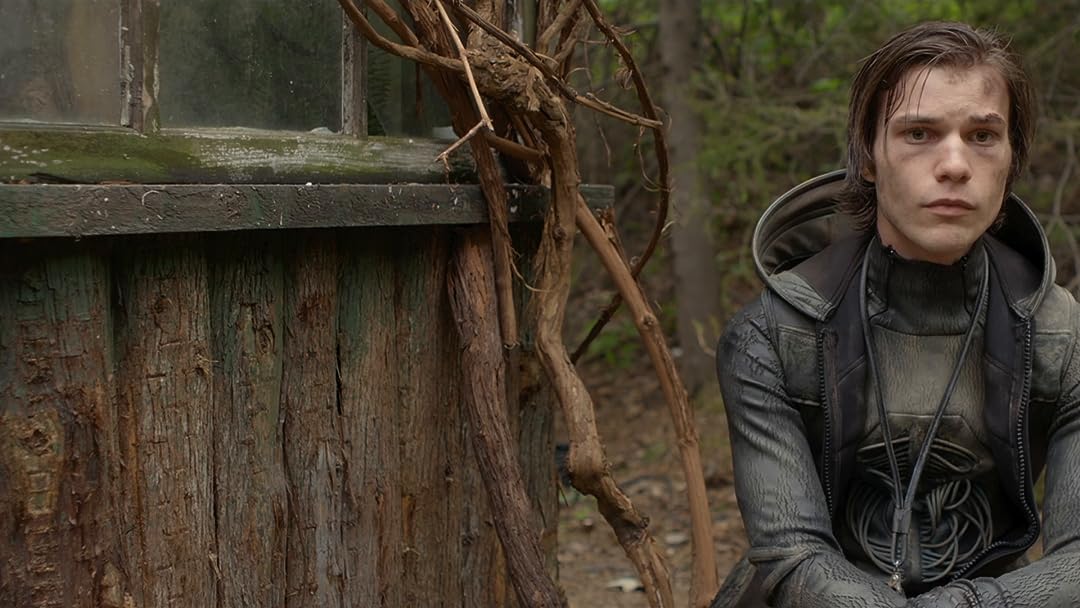 (1,185)
5.21 h 16 min2016X-Ray16+
In an oppressive future, a young man lives, like everyone else; in a small cement module with little more than a computer. One night, lightning from a storm hits his module and knocks out his computer, so he ventures out in search of human contact...

Tim H.Reviewed in the United States on August 23, 2021
5.0 out of 5 stars
Interesting movie with a true warning
Verified purchase
So, this is not a huge production value, blockbuster movie, but the story is an interesting one. For those reviews who don’t understand the lesson of this movie, allow me to explain. The “World Authority” used fear-mongering to get the world population to do things contrary to human nature. Fear is a powerful tool used by despots and evil regimes as old as time. We see it today with COVID numbers being blown out of proportion and doomsday scenarios on every news channel. The kryptonite of fear-mongerers’ are free thinking, intelligent people.
326 people found this helpful

Kent A. LarsonReviewed in the United States on August 22, 2021
4.0 out of 5 stars
What's the point of this movie? The point is the importance of LIVING.
Verified purchase
I read one review of this movie that asked what was the point and then dwelt on the negative aspects:
- men leave - games are addicting, etc. The point of the movie was to show these are NEGATIVE things and we need to move past them. We need to not blindly follow authority but question and ask for proof. I thought it was a great movie. Surprisingly, it isn't on IMDB. I've never run into that before.

Molly Parker does a great job of being the maternal influence like she was in the newest Lost in Space. The rest of the actors were well done as well. I recommend it.

ShootingInTheDarkReviewed in the United States on August 29, 2021
4.0 out of 5 stars
Good Plot, There's a Lesson Here
Verified purchase
I was surprisingly captivated the whole time and aside from some minor bad acting, this was a good movie, could have been a little more story development but I liked it. The story line is good, we are capable of being self sufficient and we should be. The family unit is important no matter who it's comprised of and extended families aren't a bad thing. Everyone should work toward the common good and not just be out for themselves.
Unlike the COVID conspiracy guy talking about the "World Authority" using fear to get people to do things contrary to human nature; I actually paid attention to the beginning of the movie where they talked about chemical warfare and ecological disasters.
For those who live in bubbles and don't know how to fish or hunt or grow vegetables in the dirt, learn for your own sake. Pass the skills down to your children.
Stop communicating by text and actually talk to people. Stop with the gaming already. There's a great big world out there to explore. Discover the beauty of nature and help preserve it. If everyone just picked up three pieces of trash and properly disposed of them every time they went to a beach or park, it would make a difference.

Avid readerReviewed in the United States on August 30, 2021
3.0 out of 5 stars
Pleasant enough, but.....
Verified purchase
The movie opens nine years after the war which devastated the world, and chemical warfare was conducted, making living outside impossible. We are introduced to Darwin, who was put into a sanctuary pod by his mother. It is his world with mindless work and endless games. Yet, he is supplied with food, etc., so that begs some questions. Although he has an extensive choice of what to eat, it seems like it results in all the same meal. An electrical storm hits his pod, and he winds up leaving. He wanders for four days with no food or water. Right there, I have a problem, as he walked by water sources, and a person is unlikely to survive that long without water. And there is narration and the voice simply doesn’t seem to fit. But this is the start of many similar stories, so did they do anything different to hook in the viewer? The story is very pleasant and certainly family friendly, and he wanders into a home in the wilderness where a family is living. He hasn’t spoken for nine years, so he cannot speak. They have a clever way of mimicking computer typing to communicate, but the flaw there is that is not how he did it in his pod. The family he is with is put in danger as the authorities use drones to track down people and living as they do makes them criminals. So how will things unfold? I feel there was potential that was not met. Three stars may be a bit harsh, but it doesn’t deserve four.
36 people found this helpful

Howard CReviewed in the United States on August 30, 2021
2.0 out of 5 stars
Always good to give your mother at least five minutes: 2.5 stars tops
Verified purchase
The cinematography was good. The acting is largely fine. But the story had holes all over the place.
The script literally didn't match the reality of the landscape as we went along. Slight spoilers coming up.
He says, after a couple of days of walking, "I couldn't be sure if I was dreaming or not but the sign of life gave me hope" when he heard a dog barking. Well, he'd already seen that dog on video. His job in his pod involved earth-moving machinery via video link. You can see shrubs and trees all over the place. He's been looking at them for years. And when he leaves the pod for good, the first thing he sees is two birds swoop over him. We saw an insect buzz him but, yeah, sure it took him days to see a sign of life.
Well done you, genius.
A perfect example of that 'joy/relief of finding life' sequence would be the aftermath of the crash in the original Planet of the Apes movie. THAT'S how to do that.
And finally, in order for the film to make a point about how people remain indentured to their pods because fear has incapacitated their emotional and cognitive abilities, a realistic meeting between mother and son is sacrificed to make that point.
He gives his mother barely five minutes before saying goodbye. That's not what a normal person would do. You'd go back day after day to gently bring her out of her shell.
The film had a decent premise but the execution pretty much sucks. Likely because they didn't have the money to realize the script.
35 people found this helpful

R. WellsReviewed in the United States on September 8, 2021
4.0 out of 5 stars
Read this one.
Verified purchase
This movie has a valuable message within it:

Government fearmongering is used by authoritarian governments all over the world and has been for as long as there have been governments. It's meant to isolate populations and drive people apart. Fear is used to increase government control over the population. It is used along with police and judicial authority to punish any who do not obey. To punish those who are not afraid of all the voices saying; "The sky is falling. Therefore you must give up your freedoms and obey." While this is a secondary message. It is still there. And the message is relevant for the day we live in.

I enjoyed the movie for the most part. But it was very slow. There needed to be more drama. If I had written it. There also would have been some bad people who escaped the captivity. And the person controlling the drone would have saved the people who took Darwin in. And afterwards the drone operator would have landed the drone, gotten out of their seat and walked outside in the fresh air.
22 people found this helpful

Clinton LewisReviewed in the United States on July 2, 2021
4.0 out of 5 stars
Actually a pretty decent movie.
Verified purchase
Compared to a lot the garbage that's come out recently, this is actually a pretty decent movie. Finally some good acting. The plot set up makes sense, which lends to the story. At times, some things are questionable, but the ending leaves the viewer with clarification, unless of course, the viewer is brain dead.
23 people found this helpful

J of AReviewed in the United States on September 19, 2021
1.0 out of 5 stars
Ok boomer
Verified purchase
Now I can say I genuinely feel bad for other movies that I've left a 1 star review on. This dumpster fire is akin to watching Grandma's dentures slowly fall out of her face while she sleeps in her favorite armchair with Alex Jones on the "newfangled picture box" screaming about frogs.

If I had a time machine, I wouldn't go back to bet on sports or buy stocks or "know the future", I'd go back and tell myself to watch something else.
13 people found this helpful
See all reviews
Back to top
Get to Know Us
Make Money with Us
Amazon Payment Products
Let Us Help You
EnglishChoose a language for shopping. United StatesChoose a country/region for shopping.
© 1996-2022, Amazon.com, Inc. or its affiliates