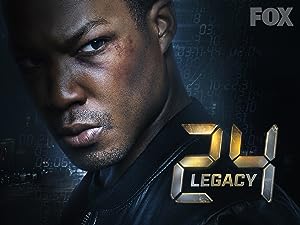 MovieskinnyReviewed in the United States on April 16, 2017
3.0 out of 5 stars
Perils of Pauline, 2017)))))))
Verified purchase
New 24 is OK. The show is done with the same plot style and production quality of the old 24. The only thing I'm holding back on here with a minus star is Kiefer's political social meddling again, like Designated Survivor, and plot shenanigans. Kiefer Sutherland is again trying to get me to buy into premises that are a little stretchy, like the new main character. We have a black rogue military guy weaving his way in and out of main stream government policing and terror. He also has a brother that is a major criminal drug kingpin, and is being considered for employment at CTU. OK, I'll buy a dozen of that?! Why can't these producers just make great TV and bypass the social commentary with trying get me to believe what they hold dear?

The plots are all very similar to the old CTU's terror trackdowns. So if you remember any of the previous 8 season of 24, the plot twists are little more than rehashing old twists. Which, by season 8, they were already doing that in the old one. We know the same plots are coming and watch them all the same. The actors are giving it their all on screen, and as I said, the production values are top notch. I remember watching the old episodes more than once, but I'm not getting any jonesing to watch any of the 24 Legacy episodes again. Now that Kiefer is a big time producer, his political agenda is hitting me upside the head too often, instead of wowwing me with believable, logical, or ingenious plots.

Like Kiefer's Designated Survivor, his political/social viewpoints are getting a little much for me. Entertain me, not indoctrinate me.

All in all, there are worse shows to watch, and this one is still entertaining, but remember to keep suspending those disbeliefs.

Amazon CustomerReviewed in the United States on June 25, 2017
2.0 out of 5 stars
Disappointing...
Verified purchase
Glad to see this one got cancelled. The story is quite clunky and the lead actor struggles to fill Kiefer Sutherland's shoes. The lead actor came across as a bit stilted or forced. The story is honestly the same story we saw with the last 8 seasons: innocent man wrongly accused, traitors in CTU, aggressive/ risky actions to stop terrorists, everything turns out okay in the end minus some deaths. The lack of innovation in the story and the characters is disappointing.
3 people found this helpful

Kim43Reviewed in the United States on April 12, 2017
4.0 out of 5 stars
What happened to the "Get up & go" of the original???
Verified purchase
I like it, but I miss the edge-of-your-seat grittiness of the original. I hope Carter is able to find it or Jack comes back. It drags too much...not enough edge to it, and too few surprises. Also, I don't like Tony as a "bad guy". I'm not giving up on it, just hoping the 1st season glitches will be worked out quickly.
4 people found this helpful

David0001Reviewed in the United States on February 10, 2018
1.0 out of 5 stars
Don't touch this with a ten foot pole
Verified purchase
An absolute mess. This must be the most incompetent set of actors ever assembled, especially Miranda Otto but also Jimmy Smits, Corey Hawkins, and all the rest of this horrid crew. And the story writing veers between dumb and moronic, and same with the dialogue. The best parts of the episodes are when I fall asleep and wake up to discover the episode played to its end during my glorious slumber.
4 people found this helpful

Bill KReviewed in the United States on May 3, 2017
4.0 out of 5 stars
Strong Finish
Verified purchase
Had I written a review when I was at episode 6 I would have given it 3 stars, possibly even 2. It just wasn't clicking for me. The story picked up steam though and finished strong episodes 10, 11, & 12. Don't get me wrong. This is not Jack Bauer. Unless Sutherland comes back, there won't be another Jack Bauer. This wasn't bad though and I will watch a season 2.
2 people found this helpful

barbwReviewed in the United States on April 14, 2017
5.0 out of 5 stars
Great Show, Worth my time and money!
Verified purchase
I have watched all of the original series and movies which were great and even though this is different I am really enjoying it. I started watching it after I bought it near the beginning but decided to stop and wait till most of the season had been shown and then binge watch it. I think all but the last episode have been televised. I think it is great and I love binging and watching tv shows commercial free, it really allows you to get into the show without all the interruptions. I have really been enjoying this alot and hope they do another season. I think all the actors are great. I did not expect it to live up to the original 24 shows but to be an original on its on merit and to me it succeeds.

Douglas Q.Reviewed in the United States on June 28, 2020
3.0 out of 5 stars
If you're a fan of 24, its a no brainer
Verified purchase
I'm one of the biggest fans of 24 on the planet. I love my dad, but if Jack Bauer was my dad, I don't think I would have been upset about it. This adaptation of 24 is pretty decent, but nothing compared to the 1st 8 seasons, or Live Another Day.

NATHANIEL PEARCEReviewed in the United States on July 11, 2020
5.0 out of 5 stars
Good quality viewing.
Verified purchase
We enjoyed the series and had no issues watching ondemand.
One person found this helpful
See all reviews
Back to top
Get to Know Us
Make Money with Us
Amazon Payment Products
Let Us Help You
EnglishChoose a language for shopping. United StatesChoose a country/region for shopping.
© 1996-2022, Amazon.com, Inc. or its affiliates