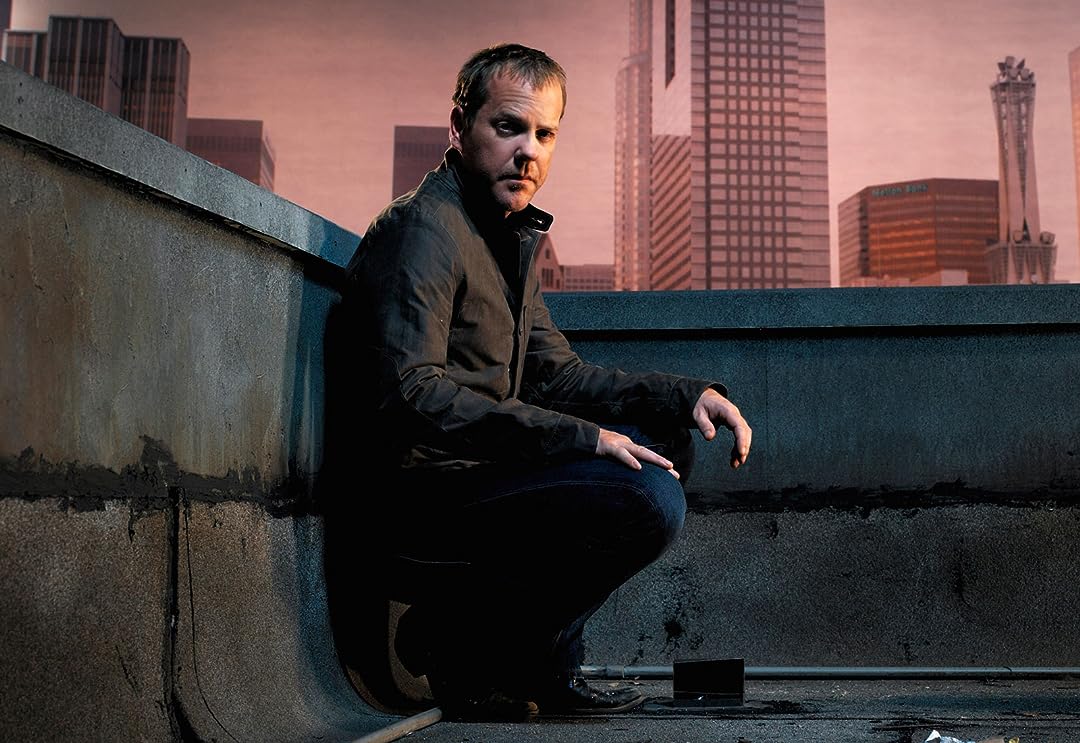 (3,772)
8.32005X-Ray13+
Although fired from CTU, Jack Bauer is thrust back into action after a deadly terrorist strike and the kidnapping of his new boss, the U.S. Secretary of Defense.

AReviewed in the United States on June 22, 2016
5.0 out of 5 stars
Don't Stop
Verified purchase
This show is worth revisiting. I stopped watching it during this season, because it was getting a little too on the nose with what was happening in the USA and the rest of the world. I just couldn't. But I'm glad I decided to revisit my decision. Day 4 has a lot to commend it. For one thing, except for the fact that torture always seems to lead to the truth on this show, the moral problems with it don't just get brushed off. At the same time, there's no pandering or handwringing over it, either. It's very nuanced, especially for a show that is telling a multiplot action story set within a 24 hour time period.

For another thing, there are a lot of women in this show, and they have agency and points of view and important jobs. The one thing that I thought was kind of a drag about this season was the [SPOILER WARNING scroll down past the end of the review to see the drag part]* but even that wasn't too bad.

Alberta Watson and Lana Parilla are two of my all time favorites. As Driscoll and Sarah, they are flawed and competent and very believable. Mary Lynn Rajskub - I think - plays Chloe to perfection. She's hard to take sometimes, but I think it's because she's neurodiverse and a little too smart. Kim Raver is good, but I like her better in a more morally ambiguous role (see, e.g., Revolution). She's fine here, though.

The plot is a bit hit and miss, but it stays plenty exciting, maybe a little more so even than Season 1. And there are plenty of surprises along the way.

*
*
*
*inevitable damsel in distress effect of Jack having a love interest, but

Quick QuoteReviewed in the United States on January 22, 2017
5.0 out of 5 stars
This is the Max
Verified purchase
I can simply say that this is the very first series that I have ever seen that has produced all of the action, suspense, drama and thrills in each episode that I can absorb. I did not think that writers were permitted to write this intensely. This series will test the audience's ability to endure suspense. The mixture of characters also provides the audience with a feeling of reality that approximates life as nearly as film can. Forget the suspending reality angle. This draws you into a world that you are happy to view from the comfort of your sofa.

When I rated this movie five stars it was because there is no room for improvement in this script.
3 people found this helpful

RachelReviewed in the United States on July 16, 2016
5.0 out of 5 stars
best season so far
Verified purchase
OMG, best season so far! Ok, at the end of season 3, too many people were killed off/taken off the show....so my expectations were not high. I was not enjoying all the new faces at the beginning of this season. But as it went on, it definitely took on a different perspective from the first three seasons, and the pace was MUCH better. I was getting tired of the same style and plot twists in seasons one and two. This season definitely moved better, had a much more cohesive plot line, and it's the first time Jack Bauer is EMOTIONAL! Yes! And much more believable in his role....they also brought back several characters as "guest stars" in this season, so that was nice. :)
3 people found this helpful

koneReviewed in the United States on April 28, 2012
5.0 out of 5 stars
5-Stars and More
Verified purchase
"24" Season 4 is an addictive, exciting, serialized drama that has no peer. Hands down, this is the best drams to air on TV - there simply is no equal to it. Each episode leaves you amazed, shaking-your-head-in-amazement, and wanting more. You cannot go wrong in purchasing this season - you will get 24 episodes of nail-biting heart-racing excitement as Jack Bauer leads the CTU team to stop a nuclear terror strike on US soil.

Keifer Sutherland again reprises the role of Jack Bauer, CTU Field Agent who will stop at nothing and sacrifice everything to stop the threats that are trying to destroy his country. This season again explores the almost impossible task of being a CTU agent and having a meaningful, fulfilling relationship. This theme is explored through many characters, and is quite touching, and provides an emotional contrast to the non-stop action "24" is known for. The supporting cast is superb, and the personal plot themes involving these characters lends an emotional reality to a show which already presents a race-against-the-clock stark dramatic reality.

I have watched four seasons of "24", and each season continues to top the season before. In short, this is the best entertainment television can offer. Not suitable for viewers under 12 years old due to violence, plot themes, and mild language.

Kayleen SereneReviewed in the United States on February 19, 2016
5.0 out of 5 stars
24 Hours excellent.
Verified purchase
I absolutely loved 24 but the boom boom thud thud music annoyed me to the crazy point!!!!! It was the best written series I've ever watched. Thrilling, couldn't miss a word always, LOVED Kiefer Sutherland. He had character, morals, faithfulness, . Whoever created this mans character and principles deeply touched my heart. He showed in truth the horrors of political life and how one man could rise above the Bulls*** in the greedy and ambitious power hungry men and women who govern us lacking in wisdom. This character portrayed a man who could draw men and women around him not by coercion, manipulation, lies,and deceit, but by example. I was never bored and I never tired of the way this series flowed together. It didn't repulse me with vulgarity, torture, or results in reaching his results. The portrayal of reality never ceased to amaze me. I only wish that at the end of series eight it was over. I never wanted it to end. I'm 71 yrs old, new to technology ,TV, Roku, Apple, Amazon. I am paying for Netflix but because I have a one year free Prime Video package. Now that I have finally learned how to manipulate myself around Amazon Prime I never watch Netflix. Can't wait for next series of Railroad Man to become available.
5 people found this helpful

amazon customerReviewed in the United States on October 1, 2016
5.0 out of 5 stars
Where is Marwan?
Verified purchase
I remember watching this season when it first aired. I also remember the actor Arnold Vosloo appearing on a talk show and how people asked "where is Habid Marwan?" since Jack kept missing him. Arnold Vosloo went on to a nive movie career, although it was short-lived. Mr. Vosloo should have had a longer carreer in Hollywood. As always, action-packed every hour and the tension is palpable. A bit conrvoluted at times, but overall good story telling. Awesome supporting cast, except for the female contract killer (last two episodes) that was worst acting ever ever.
One person found this helpful

Alejandro ContrerasReviewed in the United States on February 20, 2006
5.0 out of 5 stars
Heart-stopping
Verified purchase
24 is a class on its own. Even though there are some differences (explained above) between Season 4 and the previous three, the fact remains that this is a truly outstanding show.

If you enjoyed the first three seasons, number 4 will not disappoint you. If you did not, don't waste your time. And if you have not yet watched any season, and even though #4 is great, my advise would be to start from the beginning, with #1. But if you don't have patience and want to move on to this one, go for it. Not having watched the previous ones will have minor impact on your enjoyment.

24 is one of the most addictive action series ever. Its "live drama", simultaneous shots of actions happening in different places at the same time, its writers' willingness to create unexpected turns of events (those daring situations which usually you don't expect to happen), are some of the reasons why its so outstanding. You will be glued to your seat while you watch this fantastic show. Yes, it is not perfect: some characters (like the emotionally-challenged Chloe O'Brian and Edgar Stiles) are truly (and I guess intentionally) awkward and are not as believable as the rest. Still, this is one of the best things that have happened to television in the past years.

KevinReviewed in the United States on January 13, 2006
4.0 out of 5 stars
Requires severe suspension of disbelief
Verified purchase
I've enjoyed every season of 24, yet with season 4 I found myself complaining during the show. This season involves 1 terrorist plot, leading into another, which leads into another, which leads yet into another plot. Each evolution is fine until you realize that each plot depends on the one before it being pulled off successfully by the terrorists. At some point the complexity becomes overwhelming.

Furthermore, some of the plots obviously required long term planning down the exact date something happens, while other parts of the plot require the terrorist to have last minute knowledge of certain events. In other words, you don't find out when something will happen until the day before, but parts of your plan depend on knowing that information weeks or months earlier.

I realize the writers have a tough job, and continuing to come up with inventive plot twists is hard work, but I have a memory, and after or during the show I may think about how we got from there to here, and it just doesn't jive.

The show is great fun to watch, and each episode leaves me wanting to see the next one, but it does take away from the fun when I'm yelling "That couldn't of happened" or That's Preposterous!" at the TV.
5 people found this helpful
See all reviews
Back to top
Get to Know Us
Make Money with Us
Amazon Payment Products
Let Us Help You
EnglishChoose a language for shopping. United StatesChoose a country/region for shopping.
© 1996-2021, Amazon.com, Inc. or its affiliates