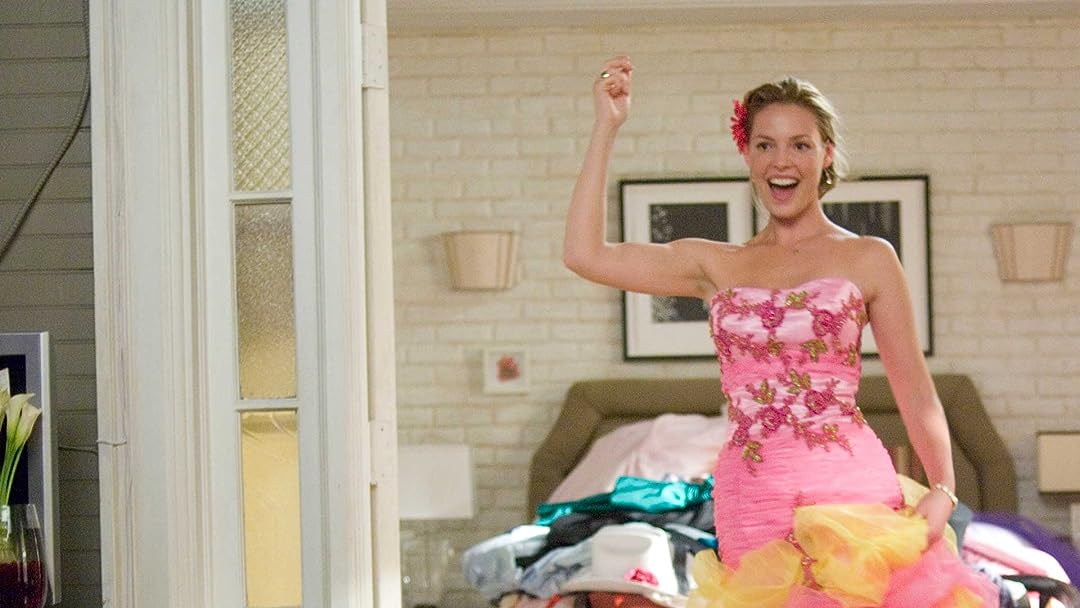 Leaves Prime in 31 hoursRentals include 30 days to start watching this video and 48 hours to finish once started.

Amazon CustomerReviewed in the United States on October 16, 2020
2.0 out of 5 stars
I truly do not understand why people like this
Verified purchase
I am a huge fan of rom/coms and chick flicks so I was really excited to finally watch this and see what all the hype is about. But oh lord this was so all over the place. Here is why
1) The plot itself is so weird, a girl who attends weddings 24/7? It would have made sense if she was a wedding planner but she isn't so this honestly makes no sense
2) The acting is really bad on behalf of Katherine, I had to look away out of second-hand embarrassment every time she interacted with her boss i in the film
3) The love story between her and Kevin was so rushed and had no substance
4) Everything was SO all over the place. The storyline, the character development just everything was so so bad.

SuzieeQQReviewed in the United States on December 1, 2021
2.0 out of 5 stars
Pretty bad even for fluffy rom com
Verified purchase
The idea behind having to buy numerous and sometimes outlandish bridesmaids dresses will make every woman —of any age—smile. But that’s it, a One trick pony.

Lead actress is endearing at first… but very soon her people-pleasing goes over the top so it’s sad rather than entertaining. I will refrain from commenting on her personal dignity as it relates to her interactions with her male boss.

The sister theme kills the movie—i found the jealousy between sisters really unappealing especially for a movie geared towards women. Then the main character’s sister’s desperate need for a husband and erratic behavior is worrisome , (I sincerely thought she was going to turn out to be a hatchet murderer) her ongoing deceptive ploys unbelievable. Meanwhile the male lead’s cynicism and severe aversion to relationships was a giant red flag —/why would the female lead pursue him? Ugh

Basically every character had emotional flaws that were not funny and I felt every one in the movie needed SERIOUS therapy for emotional healing before ANYONE should be in a relationship.

Sheryl FechterReviewed in the United States on July 28, 2018
5.0 out of 5 stars
"What? You Kept Them All?" - Kevin
Verified purchase
Imagine looking into your hallway closet and twenty-seven dresses of all shapes, colors, sizes, and dates are all staring back at you. Basically, you must back into the door just to slam it shut anymore. Now, how much is that worth in money alone? Let alone time, giving, work, and energy. This is exactly what Jane (Katherine Heigl) does for others in her life as she devotes all of her inspiration - and whatever else could be expected - to all of these bride's magic moments. It is her own glory to assist and to take over the whole ceremony offering every bride her adoration in the most attached of ways. She holds in the highest regard the whole 'idea' of weddings while clipping the newspaper's highlighted romantic stories of the week's interesting turn of wedded bliss and collects them all. You could say Jane is obsessed with being obsessed and enraptured to be of service. Hmm, weddings, write-ups concerning them along with her boss, George (Edward Burns), and yes, she dreams of the day she... and George will hookup. This would truly be the icing on her own divinely layered wedding cake.

Unbeknownst to Jane, the newly placed marriage column writer from the weekend's paper is also a blatant cynic of the nuptials he is writing about...or, is he really? Kevin (James Marsden) trips oh so politely through a couple's special day - word by word - as Jane drinks it all in with an over-the-top romantic straw. Especially during an intriguingly personal photo-shoot he must get done for a piece he has begun working on. When it comes to the wedding reporter's articles, Jane's collecting and dreaming over his writings of floral loveliness wisp her forward week after week - along with her abundantly jammed-up closet. She would never dream of saying 'No' to a bridal friend in need.

Everything seems to be in place to keep Jane's life in order, that is until her delicious model sister, Tess (Malin Akerman), pops into her life unexpectedly and turns George's head around in matrimonial circles. While Jane questions the whole idea that may be in her sister's future, Kevin questions the 'whys' of taking other's Kodak moments instead of collecting one's own resulting in this comedic wedding farce starring Jane herself.
8 people found this helpful

OligonicellaReviewed in the United States on June 5, 2022
5.0 out of 5 stars
Sucker for rom/coms.
Verified purchase
Loved this flick. Of course it's a slightly silly premise (although I have a friend who's done it numerous times), it's a comedy, by definition exaggerated. While the premise is shallow, the character parts are not. Most rom/com actors can't carry off any depth of emotion as a collective or single actor but Heigl carries off the role perfectly.

Standard and foreseeable happy ending but then, it's what we all really wanted to see happen anyway.

MLYReviewed in the United States on June 28, 2022
5.0 out of 5 stars
Loved it!
Verified purchase
Loved it! It is definitely a rom-com, which I love. It's a little formulaic, but not completely ditsy or misogynistic. There are a lot of good roles for women; and the men either complement (with an "e") or are fooled by the women. The character development and the ending was happy and emotionally mature. Hurray for Heigl!

I wish that I'd seen it when it first came out. The title threw me; it sounded too silly.

L. SmithReviewed in the United States on December 17, 2018
5.0 out of 5 stars
ALWAYS a bridesmaid, never a bride!
Verified purchase
We meet the self sacrificing Jane who's always a bridesmaid with her organizer to help her 27 friends have the perfect wedding. Jane, is surprised by her little sisters arrival and plan to marry Jane's boss, the man Jane is secretly in love with. Then her sister asks Jane to plan her wedding. So Jane starts to plan and meets the man who writes her beloved wedding columns and as they learn, respect and finally to love eachother Jane stands up for herself. It is a comedy and a better movie then this review, well worth a rainy Sunday afternoon viewing.
3 people found this helpful

H. BalaReviewed in the United States on March 10, 2009
4.0 out of 5 stars
"The maid of honor is a peculiar young woman..."
Verified purchase
27 DRESSES is formulaic and predictable, and I have no problem with that, given that I really enjoyed this movie and, in many moments of watching it, grinned the big grin of having fun. Katherine Heigl makes the whole thing work, and, combined with her terrific stint in [[ASIN:B000TZJBPQ Knocked Up (Unrated Widescreen Edition)]], I no longer think it's a fluke that she's this good a comedienne. She's tall and beautiful, yet her most appealing quality is that she doesn't at all mind looking goofy. And, in those horrible, horrible bridesmaid outfits, Katherine Heigl looks dang goofy.

Jane Nichols (Heigl) was eight when she found her purpose in life - which is being the sensei of averting wedding day disasters. Jane grows up self-effacing and accomodating and very, very responsible. And years later she's still in love with weddings, still can't say no to attending one, can't say no to organizing one. And all those awfully garish bridesmaid dresses she's worn? She keeps them in her closet.

For a long while now Jane has quietly pined for her boss George (Edward Burns), a perfectly perfect outdoorsy entrepreneur type who is also a vegetarian and a Big Brother to a Latino kid. And because you have to put the heroine thru her paces, Jane's gorgeous, spoiled younger sister Tess (Malin Akerman) blows into town and instantly bags Jane's boss. So hell hath no mean disposition like a woman having to organize the nuptials of her much mooned-over boss and her younger sister.

As if that's not enough torture, Jane keeps running into Kevin, a cynical newspaper writer who just annoys the living hoolies out of her. Kevin's disdain of all things weddingy immediately antagonizes Jane (to him, weddings are all about "the forced merriment, the horrible music, or the bad food"). But what Jane doesn't know is that Kevin's beat is the matrimonial column and that he's angling to write a piece on her and her serial bridesmaid lifestyle. Thing is, as played by James Marsden, Kevin isn't as slimy and calculating as you'd suppose. Not the least, dude also sings a mean rendition of "Benny and the Jets," even if the words are made-up gobbledy-gook. The ol' Cyclops really surprised me with how well he dives into his romantic leading man role, and with how funny he is. The "Benny and the Jets" bar scene is the best moment in this film.

27 DRESSES has just a bit of that FOUR WEDDINGS AND A FUNERAL vibe going on, only from a woman's perspective. It's a pretty funny film, even managing to plant a few gentle digs at the wedding industry. And, to come full circle with the title, I dig what Jane does with those 27 dresses, there at the end. Katherine Heigl has a talent for this type of role. She's good enough of an actress - and she endears herself to the audience with that yearning, self-sacrificing thing she does - that you can't help but feel for her (and maybe even squirm with her) as she sadly sees her sister's fling with her boss evolve into something more serious. I think I need to see Katherine Heigl in more romantic comedies.

Malin Akerman (WATCHMEN's Silk Spectre II) is good in her thankless role of the younger self-absorbed sister Tess and Judy Greer again knocks it out the park with her snarky best friend take (she also rocked that role in [[ASIN:B000CEV3KU 13 Going on 30 (Fun & Flirty Edition)]], which starred Jennifer Garner, another girl not afraid of looking silly. Edward Burns, though, plays such a nice guy here that he ends up a pretty dull and boring dude.

Special Features: three deleted scenes, featuring Jane hailing a cab only to have someone jump into it ahead of her, Jane trying on her bridesmaid dress for Tess's wedding, and Tess accidentally almost sending Gatsby (George's huge pet) to doggy heaven; "The Wedding Party" - the Making Of featurette; "You'll Never Wear That Again" - the costume design featurette; "Jane's World" - the set design featurette; and "The Running of the Brides" focuses on New Jersey's Filene's Basement bargain store and its hectic annually-held one day wedding gown sale.

27 DRESSES is a chick flick, and it's familiar and you see where it's going - but I'm saying that Katherine Heigl is so likeable that you end up forgiving the been there/done that storyline. All the girls I know (all three of 'em) love this movie. If you're a dude, you'll score high points if you pop this in the player on date night. Although, if it's date night, you should probably take her out for lobster or something, instead of staying at home watching movies...
8 people found this helpful
See all reviews
Back to top
Get to Know Us
Make Money with Us
Amazon Payment Products
Let Us Help You
EnglishChoose a language for shopping. United StatesChoose a country/region for shopping.
© 1996-2022, Amazon.com, Inc. or its affiliates