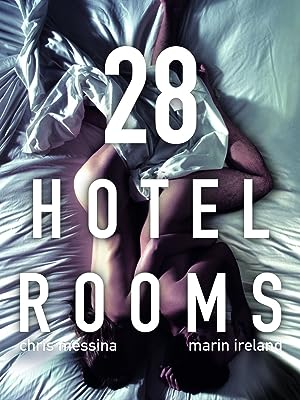 (211)5.81 h 22 min2012X-Ray18+
A passionate and lurid affair threatens the day-to-day lives of an author (Chris Messina) and an accountant (Marin Ireland) after a one-night stand becomes much more.

amy bownReviewed in the United States on November 12, 2015
5.0 out of 5 stars
Great acting--much of it improvised
Verified purchase
A movie where nothing seems to happen while you're watching it, but leaves you thinking about it long after. Great acting--much of it improvised. I had a long-distance, bicoastal relationship with a boyfriend, and he and I used to meet halfway in hotels in another city. We never spent much time with each other in our "real lives", and the relationship eventually fell apart, because it never felt quite "real". This film could have been that relationship, to a TEE. It asks the question: what happens when a relationship is free of family, friends, work, daily stresses, and exists only in a controlled environment where you can explore a love that can only live within its own confines? After a while, does it stop being freeing and exciting and become stifling and imprisoning? The scene where Messina can't even open the windows brilliantly demonstrates how claustrophobic their relationship became, and how without outside influences, it was unable to grow. And (POSSIBLE SPOILER) a lot of people interpret the ending as too pat--that they're finally going to be together. But I saw it differently: I thought it them just talking about being together for real, at last, as they have before, but I didn't get the feeling it would actually happen. The sad little look Messina gives her at the end--you just feel like they know it's not going to happen. So I thought that was a sad, but appropriate, ending. And not for nothing, but Chris Messina is GORGEOUS in this film. Those lips, those eyes, that body---wow, so hot. He's an underrated actor and an unconventional sex symbol. The movie is worth watching for him alone.
18 people found this helpful

IRISH KATHLEENReviewed in the United States on February 23, 2018
4.0 out of 5 stars
Worth a watch!
Verified purchase
Interesting idea for a film. When they are together they are together. An exploration of a different kind of relationship with the other relationships in their lives. Painful at times to watch, wonderful at other times as if they are a respite for each other from their other commitments.
There are all kinds of relationships in the world and this was one over time. Interesting and yet...yes the ending did leave you hanging on purpose I think because it was indicative of exactly what this kind of relationship was for them. I was left with the feeling that it would always be just what it was.
Great actors, great on screen chemistry and an interesting progression through time with the change in their lives, aging, and the emotional roller coaster that love is whatever form the relationship takes.

figgynewtonReviewed in the United States on February 20, 2015
4.0 out of 5 stars
interesting take on a '1 night' stand
Verified purchase
I watched this on a whim. Not really expecting a lot, just killing some time. To my surprise, this was a really good movie. What started out as killing time turned into 'wait I have to see how this ends'. The 2 main characters were actually likable and it was interesting to see their relationship change as their 'away from each other' lives change. A one night stand that takes place over the course of several years. I would watch this movie again to try to catch all the subtle relationship cues that I missed the first time.
6 people found this helpful

RedVisionWorksReviewed in the United States on March 29, 2015
1.0 out of 5 stars
Don't waste your time
Verified purchase
This movie seems like it's going to be meaningful but then it falls very short. Even though we see Messina's character grow in the movie, as he falls in love with her and is open about it (suggesting for them to have a real relationship instead of the affair they are both having because he is a decent guy), the woman is just like "bleh". I don't even know if she hows up for the affair. We don't know what's in her mind. I kept thinking that she was going to have an epiphany, but she didn't. She does a lot of crying, but I don't know why she cries. I've never had an affair, but I don't think that I would be so cold if I had one.

The affair goes on through the years. She has a baby and we don't know if the baby is Messina's, though it seemed like it. So, I don't understand...the woman is a horrible messed up human being void of emotions and other people's feelings. I could not sympathize with her for one second, even though she cried so much. She was just a bitch.

Don't watch the movie even if you are having an affair...as the story progresses and Messina's character becomes more and more frustrated about the situation we see less sex. So, not even that. We just have to deal with his outbursts and her "bleh" and that wimpy smile always on her face. Like, seriously, why does she have that smile?

It was intriguing...but it does not come out from those hotel rooms. Her character does not grow. Don't read the other reviews praising this movie either because these people are wrong.

It has one of those endings that is inconclusive. They were planning on meeting within 6 months and it seemed like they were finally going to be together, but it does not convince me. Of course, she tells him some scenes before that last scene "I'm never going to leave him. I thought you knew" and so, because of that I don't think she would show up in 6 months a free woman.

She claims to love her husband but she has this affair for years and probably the baby is not even her husband's baby. Everything wrong with this movie. Don't watch it. Not even for the sex scenes, it's not worth it.

Susan TerryReviewed in the United States on April 11, 2015
3.0 out of 5 stars
Interesting character study
Verified purchase
I would have given it four stars but I think the filmakers copped out on the ending.

This is a movie about an affair shown in the 28 times the people involved meet in their hotel rooms. The thing I found most interesting is the dynamic between the two. For the life of me, I can't comprehend what 'love' means to these two, especially when placed in context of them only seeing each other 28 times throughout the movie. They each have lives and spouses which makes their choice fascinating (and probably counts most in the cop-out ending.)
2 people found this helpful

Conscious ConsumerReviewed in the United States on May 22, 2020
5.0 out of 5 stars
Good
Verified purchase
Makes one think
One person found this helpful

Isabelle BrownReviewed in the United States on March 15, 2020
5.0 out of 5 stars
Good late night movie
Verified purchase
Pretty good movie. Gives a realistic view of how long term affairs will not end up happily. Someone will always get hurt.

Ariel BlueReviewed in the United States on January 25, 2020
5.0 out of 5 stars
good
Verified purchase
good watch
One person found this helpful
See all reviews
Back to top
Get to Know Us
Make Money with Us
Amazon Payment Products
Let Us Help You
EnglishChoose a language for shopping. United StatesChoose a country/region for shopping.
© 1996-2021, Amazon.com, Inc. or its affiliates