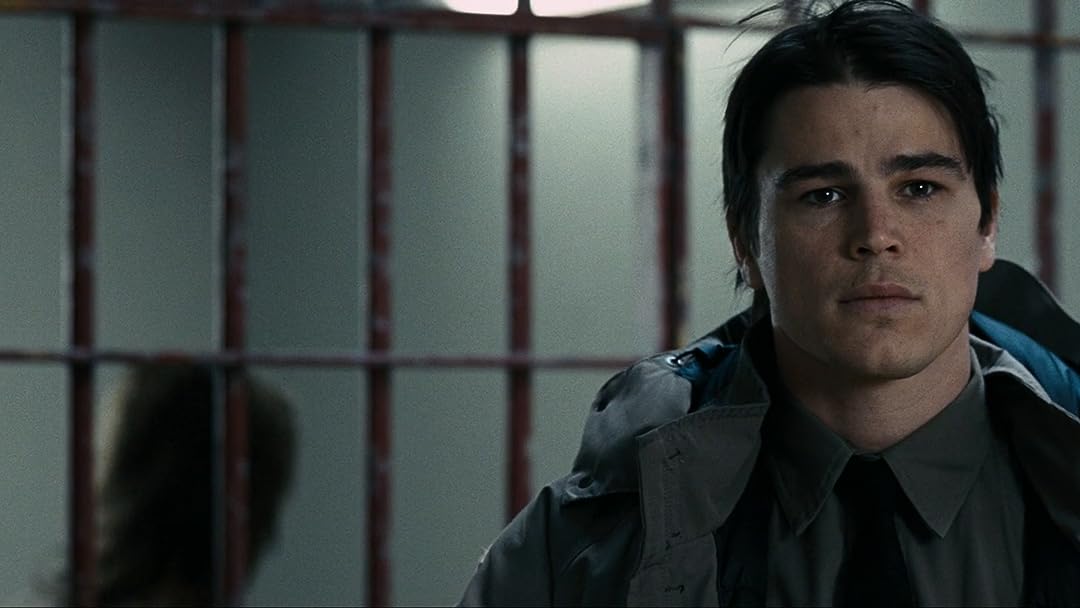 (5,584)
6.61 h 53 min2007X-RayR
Cross over to the dark side in this bone-chilling adaptation of the cult-hit graphic novel. In a small Alaskan town, a growing band of bloodthirsty vampires thrust the living into a deadly game of cat and mouse and screams.

Jeff RyanReviewed in the United States on November 1, 2018
5.0 out of 5 stars
An Alaskan lawman and others hide from a vampire invasion in Barrow.
Verified purchase
This is a gem of a horror movie from several years ago. Josh Hartnett plays the small-town police chief of Barrow, Alaska, as this farthest north Arctic village prepares for a month of no daylight during an Alaskan winter. The film captures the feel of an Alaskan frontier settlement literally hundreds of miles from anywhere else in that vast state.
The vampires, which have slaughtered the crew of an ocean freighter beached down the coast, look the part of vampires from the old lore, with white, pulpy flesh; malignant and feral eyes; wicked fangs and the eerie ability to move rapidly on all fours on vertical surfaces. They're initially aided by a human accomplice spared from the ship's crew. They speak their own language when they do speak.
"30 Days of Night" was filmed in New Zealand, probably on the South Island whose southern tip is probably the closest settled land to Antarctica (along with South America's Tierra del Fuego), but it looked like Alaska, where I was stationed during my time in the Army. I experienced those long dark winters myself, although Ft. Wainwright, near Fairbanks, was far enough south to have three or four hours of daylight around the winter solstice.
This film has a lot of suspense and horrific moments as normal people try to deal with something that's anything but.

RosieReviewed in the United States on June 7, 2019
5.0 out of 5 stars
How anyone could give this less than 5 stars is beyond me.....
Verified purchase
Fabulous vampire movie! Nothing against the Twilight series, but THIS is how a vampire movie is done. This is vampire horror at it's finest. Just missing the flying, that's all, and that's no big deal. This isn't my first time seeing this, won't be my last, I just wish the sequel would have been better. It was awful. They should have stopped with this one. Excellent horror film, acting was superb, and this review contains no spoilers. Just 5 stars, as it should!!!!
21 people found this helpful

Rock HoundReviewed in the United States on January 4, 2019
1.0 out of 5 stars
Slow-Motion Rip-Off of Romero's 1968 Night of the Living Dead
Verified purchase
Instead of action, intelligence and a plot, we get a non-violent talk-a-thon by the movie's characters as to what should be done about 3 or 4 unusual beings who always seem to threaten to attack (but never really do) The same 3 or 4 actors, made up as if for Halloween, are recycled over and over to comprise the entire zombies (I mean, vampire) threat. Well, you say, The flick can't be THAT bad--look at the IMdB rating. Consider that amazon.com has owned IMdB 100% since 1998. A good IMdB rating may not be worth as much as before Jeff Bezos (amazon.com's CEO) acquired the IMdB critics in 1998. A horror film usually deals with that which we all must face and most dread: Death. Without a bizarre murder or two, a "horror film" is a cop-out. There are great minimal-violence horror films, e.g. Repulsion (1965) & Invasion of the Body Snatchers (only the 1956 version). but movie makers today find they can make $$$ with inferior product, so why call upon a Polanski or a Siegel to inject intelligence into the "product?" 30 Days of Night never gets off the ground.
15 people found this helpful

sixthreezyReviewed in the United States on May 6, 2019
4.0 out of 5 stars
30 Days of Night - Never Going to Barrow!
Verified purchase
30 Days of Night is a great vampire film, and one of the best in recent memory. It's based off of graphic novels by the same name, which are mostly visually stimulating more than well-written in my opinion (Ben Templesmith is excellent). However, I feel like this film captures that sentiment by portraying the vampires brutally and with some intelligence that doesn't make you think "I've seen this before". This film stars Josh Hartnett, who I enjoy most of the time, but I'll be the first to admit that he immediately seems to date any film he is in. It's odd, but here we are and with Melissa George who is great, but no it's not depth of story that make this movie tick. The shining star for me is Ben Foster, and it's always Ben Foster because he plays crazy characters so well. His wannabe vampire messenger is the most memorable part to me, other than the little things like the vampires sending a small girl out in the streets to appeal to people and make them reveal themselves rescuing her. Overhead shots of the town during its most chaotic moments also stick with you and seem like they could be ripped straight out of a graphic novel. Dealing with vampires in a town that goes dark for 30 days straight is a genius concept and it's kind of crazy that it's only now we're watching/reading stories about that. Overall, the film is brutal, bloody, and a mostly brainless good time. The twist ending is pretty wild, but at least they let it fade away at the end of the film. The special features are mildly entertaining, but the audio commentary features Josh Hartnett making fun of Melissa George a lot with a producer, which is somehow entertaining. Also cool to hear how seriously Ben Foster takes his acting, even in scenes with other actors who may not be as hardcore about feeling it all.

Blu-ray copy came in great condition, and this release does not include a DVD or digital copy. Recommend for fans of vampires and horror.

Killer Kitty 79Reviewed in the United States on February 20, 2021
5.0 out of 5 stars
30 Nights Of Hell
Verified purchase
Wow, this is a vampire film done right! I remember when this came out back in 2007, at the time I wasn't interested in it but over the years I heard this film along with others there the favourite among vampire fans. So after watching a video on YouTube with three guys talking about their top choices for vampire films, this was one of them and thought of checking it out and boy it doesn't disappoint!

The plot follows, Eben Oleson sheriff of the small Alaska town of, Borrow when series of strange events are happening within the town. Residents are getting ready for the long polar night which the whole area is under darkness for 30 days. But when the sun is fully gone, a gang of vicious vampires begin attacking the residents forcing, Eben along with anyone else who's lucky enough to avoid being hunted down.

For 30 nights, Eben and the others must work together to survive the vampires and wait till the sun rises again. But, the lead vampire is searching through town to find him as Eben must make some hard choices if anyone is going to survive this.

Overall I really enjoyed this film, very dark, violent, gory and cold too! If you're looking for a vampire that's dark yet different, check out 30 Days Of Night. I now like to check out the comic it's based on and see how good that is.
4 people found this helpful

David M Gill JrReviewed in the United States on August 1, 2021
2.0 out of 5 stars
vampires in snow... nothing more
Verified purchase
Two hours of vampires in the snow. The vampires aren't really developed. They have names in the credits, but the names aren't used in the film. This leads on to think the story was altered during production. They have a cool language they speak that is translated via subtitle, but the translation adds nothing to the film beyond explaining some motivations that don't need explaining.

The human stories in this don't provide much to emotional invest one in the fate of the characters. They spent more time in this area, but it just didn't work.

None of this is that bad until you get to the continuity era where SPOILER: one of the three "focal" vampires reappears after being killed. This reappearance seems to be the result of using the wrong section of menacing-vampire B role during editing to flesh out the final sequence. The apathy of production at the final confrontation is disheartening and turned what could have been a solid three into less. It stays at two for atmosphere.
One person found this helpful

Amazon CustomerReviewed in the United States on August 15, 2018
4.0 out of 5 stars
Great Story Line!
Verified purchase
I like the movie. Dislike the vampires. They are creepy dumb,weird they remind me more of zombies. There is more blood and gore than I care for but I like the movie because the story line is intriguing and origional. Vampires go to Alaska when it is dark all of the time for 30 days because vampires can't survive in sunlight and is easier to attack people 24/7. They cut off the power and go after everyone in town. They had a little girl vampire scene. I did not like that part. I don't like seeing innocent children acting evil and viceous in movie roles covered in blood attacking people. I feel they are too young to even watch this movie let alone be a part of it. That's probably why I didn't give it 5 stars.
8 people found this helpful

joel wingReviewed in the United States on October 4, 2020
4.0 out of 5 stars
Group of vampires attack Barrow Alaska like a pack of wild hungry animals
Verified purchase
30 Days Of Night was a new and original take on the vampire genre. The setting is Barrow, Alaska which the intro says is covered in darkness for 30 days during the winter. During that period most people leave the town with only a few locals sticking around. That’s the perfect setting for the film which focuses upon a band of vampires which attacks small isolated places like Barrow.

The difference between this film and the traditional vampire story is that there is no charming vampire. There is no seduction of women. Instead this is a group of vampires who act like a pack of wild animals. They mercilessly hunt down their pray with a lot of splattering of blood and horror. It’s great stuff. They go through Barrow like it’s Swiss cheese and it’s a pleasure to watch. I didn’t even care about the human survivors I just wanted to see what the vampire ms could do next. The movie really returns the vampires to the evil side of things rather than being debonair men looking for a pretty woman.
3 people found this helpful
See all reviews
Back to top
Get to Know Us
Make Money with Us
Amazon Payment Products
Let Us Help You
EnglishChoose a language for shopping. United StatesChoose a country/region for shopping.
© 1996-2022, Amazon.com, Inc. or its affiliates