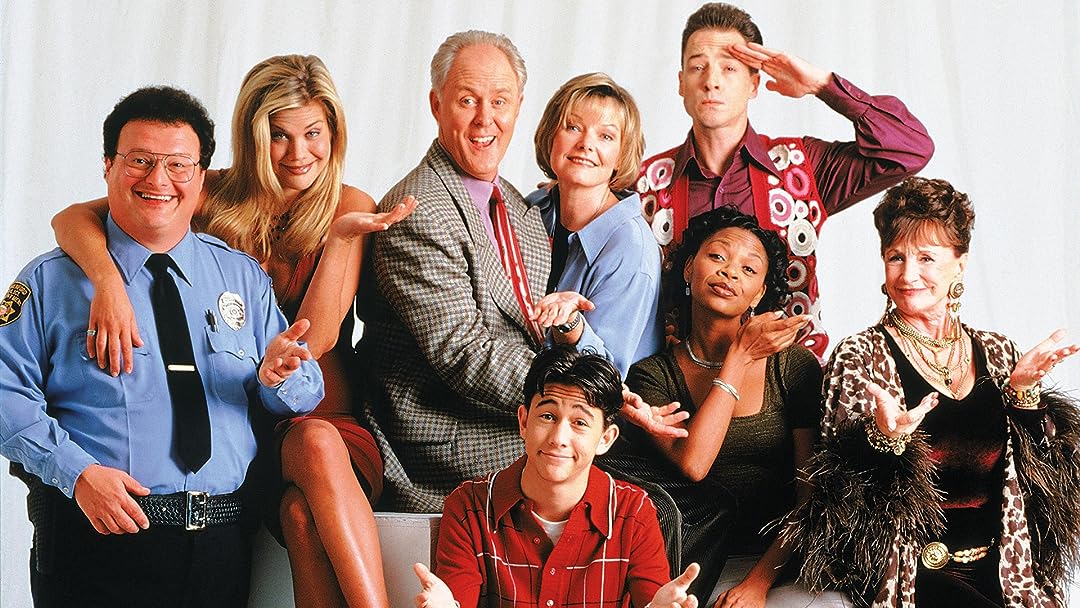 3rd Rock from the Sun

(77)
2001X-RayTV-PG
A group of aliens is sent to Earth - disguised as a human family - to experience and report about life on the third planet from the sun.

SylviastelReviewed in the United States on December 28, 2017
5.0 out of 5 stars
Oh, don't worry about me, Dick... 'We'll always have Rutherford'.
Verified purchase
Roseanne guest stars in the first two episodes as Dick's long lost wife, Janet. In the third season, Dick and Mary break up and get back together on and off relationship. The cast is still intact with Wayne Knight as Officer Don and Kristen Johnson's Sally getting together. The two part episode of the Superbowl has guest stars such as major fashion super models like Beverly Johnson and Cindy Crawford as venetian alien women taking over Rutherford, Ohio.

Guest stars included Roseanne, George Grizzard, Elaine Stritch, John Cleese, Cindy Crawford, Beverly Johnson, Phil Hartman (his last performance) and others. Jan Hooks reprised her role as Mrs. Dubchek's daughter, Vicki. This four disc DVD set is complete with all the episodes plus extras with French Stewart's interview and bloopers as well. I was really sad to see this series end after six seasons. The network did a terrible disservice by changing it's time slot all over the place. The series won Emmys for Kristen Johnson and John Lithgow. It was a very smart series about aliens disguised as humans on earth. Every episode is a delight and well done. I wished the series lasted longer.

M. HummelReviewed in the United States on March 21, 2006
3.0 out of 5 stars
A Big Drop Off In Quality From Seasons 1 and 2
Verified purchase
Seasons 1 and 2 were a blast, filled with great ensemble fun fueled by the sheer wackiness of the premise wherein four aliens are discovering everything from kleenex and sushi to what it means to be a man, a woman, a teenager. A big mistake that set Season 3 off on the wrong foot was the inexplicable decision to break up all of the major relationships of the show--Dick and Mary, Tommy and August, Sally and Don--within the first few weeks of the season.

The show was always madcap, but it also had a sensitivity and sweetness that are missing while the characters snipe at each other as a result of their various breakups. Tommy and August were so precociously funny, Sally and Don were straight out of film noir, and Dick and Mary were sweet and crazily witty. Because of the breakup of Dick and Mary, the show's center is now off-kilter. Jane Curtin has much less to do in this season, now that her character has separated from Dick.

I can guess why they engineered these breakups. They feared they'd written themselves into a corner. But if you're going to break up Dick and Mary, the main focus of much of the show, you should use that breakup wisely. I most certainly would have had Dick pining for Mary even while he tries to go out with other women. And the two parter where Roseanne shows up as Dick's assigned alien spouse just didn't work for me--the whole breakup seems artificial, and much of the humor in this season seems forced. Again, if you're gonna break them all up, you'd better have something good to fill the void, and they don't.

Individual episodes are still good, but some seem so forced--Scaredy Dick is the worst episode in the first three seasons, contrived and seemingly slapped together. I could see Mrs. Dubcek coming out of that basement the second I heard the first "ghostly" moan. I found myself saying "this is so sitcommy."

I would also guess that a new production and/or writing team took over this season, because so much here is just flat or not fully imagined. The show had depth AND wit, and now it just has wit, without polish which is not always enough.

Still, I give it three stars because of the wonderful, wonderful cast, even if the plots and scripts aren't always up to their talent level.
20 people found this helpful

Amazon CustomerReviewed in the United States on February 20, 2006
5.0 out of 5 stars
STILL VERY FUNNY
Verified purchase
At, what could be considered, a rather dismal time in my life these DVD presentations of "Third Rock" have brought me many hours of much needed laughter. I'm not just talking about "polite chuckles" I'm talking about laugh out loud from the gut kind of laughter. What a cast of wonderful actors this show had. John Lithgow, as Dick Solomon and Jane Curtin, as Mary Albright are so very funny leading a stupendous cast in some of the funniest episodes that I have ever seen in any television presentation. (I've been watching T.V. comedies since Milton Berle and Sid Caesar). In addition to Lithgow and Curtin there are great comedy performances by Kristen Johnston, as Sally, Joseph Gordon-Levitt, as Tommy, and MOST OF ALL French Stewart as Harry-no one on earth is any funnier than he is.

Series three continues the immense laughter the first two series delivered-if anything it is funnier than the first two series. See the previous review for a great overview of each program in series three. If you want to see one of the best American Comedies ever at its very best buy Series Three!
14 people found this helpful

James T. McgrailReviewed in the United States on June 10, 2008
3.0 out of 5 stars
Season three is a bit of a letdown.
Verified purchase
Because of jobs and children I rarely got to watch prime-time TV in the 1990s. So I missed a whole decade of TV and am only catching up now. Seasons one and two of Third Rock was a blind buy for me, and I was blown away by it. Being a fan of British comedy, I enjoyed the refreshingly non-American off the wall comedy. Lithgow is brilliant. Season two ended with a bang and a larger budget than usual. So I was looking forward to Season three. I'm only a third of the way through, and I am disappointed.
First, what was the point of doing the big-budgeted, one hour season ending of year two if they were going to resolve the whole story in less than two minutes at the opening of season three? That made no sense.
Second, I was able to swallow my EXTREME dislike of Rosanne and watch the two part season opener. Again, what was the point? Why break up the romance of Dick and Mary in such an uncomfortable (and implausible) way? I can only imagine the writers were going down the 'Cheers' path (romances breaking up and resolving multiple times) which has been done ad nauseam over and over again in American sitcoms.
'Scardy Dick' was one of the worst episodes yet. Dick has gone from child-like to whiney.
I can only hope the rest of the season improves, and I am looking forward to the John Cleese two-parter.
I give it three stars ONLY because of the brilliance of John Lithgow and the other cast members who are able to overcome substandard stories.
6 people found this helpful

Amazon CustomerReviewed in the United States on August 5, 2006
5.0 out of 5 stars
Nonstop Laughs!
Verified purchase
This series is absolutely absurd, and so very enjoyable. I put these DVDs in whenever I need a good hard laugh, as each show has something new that the aliens misunderstand. The booklets that come with the DVD sets are hysterical, too. In a sense, it reminds me of the old early 1980's series "Mork and Mindy". but instead of just one alien, we've got 4, attempting to create the illusion of a normal family. I will have to keep ordering these! My best friend came over, and I put the very first DVD of the series on. He said he'd never liked it much, but he insisted on watching all 4 or 5 DVDs that night, and we were both laughing so hard that the next day we felt like we'd done 200 crunches. I find this humor to be more or less the American version of Britain's Monty Python. You either love it or hate it. I love it, and I plan to keep watching it over and over.
One person found this helpful

ryan mccauslandReviewed in the United States on April 30, 2013
5.0 out of 5 stars
i love this show
Verified purchase
this is my all time favorite show. when they stopped after season 6, part of me died...like most of the other carsey-warner shows, this is very funny, crude at times, just a riot, whether jon lithgows character is experiencing something new for the first time or French stewsrt id doing..well whst he does, fans of funny shows will find this a laugh out loud, pee yourself show that keeps the laughs going right till the end!

Flexible_StrategiesReviewed in the United States on October 11, 2006
5.0 out of 5 stars
funniest show i was ever on
Verified purchase
I was lucky enough to appear as an extra on a few episodes of this show. The cast and crew of 3rd Rock are by far the nicest people to ever work with. Most shows treat the extras like cattle...not this show. Everyone was friendly. This season was one of my favorites. Every member of this show was perfect in their roles. The writing was top-knotch. It was the funniest show on at the time. No other show on the air even came close to 3rd Rock's hilarity. John Lithgow is a God.
4 people found this helpful

KiddosReviewed in the United States on October 30, 2008
5.0 out of 5 stars
Exquisitely funny, simply delightful!!!
Verified purchase
It was Awesome to see these episodes again and in their original language, I'm from Mexico City living in the USA and enjoying this lovely culture and people. The 3er Rock from the sun really ROCKS!!!! Thanks, I'm getting the whole collection!!! Also, Thank You for the captions are great for ESL students.
See all reviews
Back to top
Get to Know Us
Make Money with Us
Amazon Payment Products
Let Us Help You
EnglishChoose a language for shopping. United StatesChoose a country/region for shopping.
© 1996-2022, Amazon.com, Inc. or its affiliates