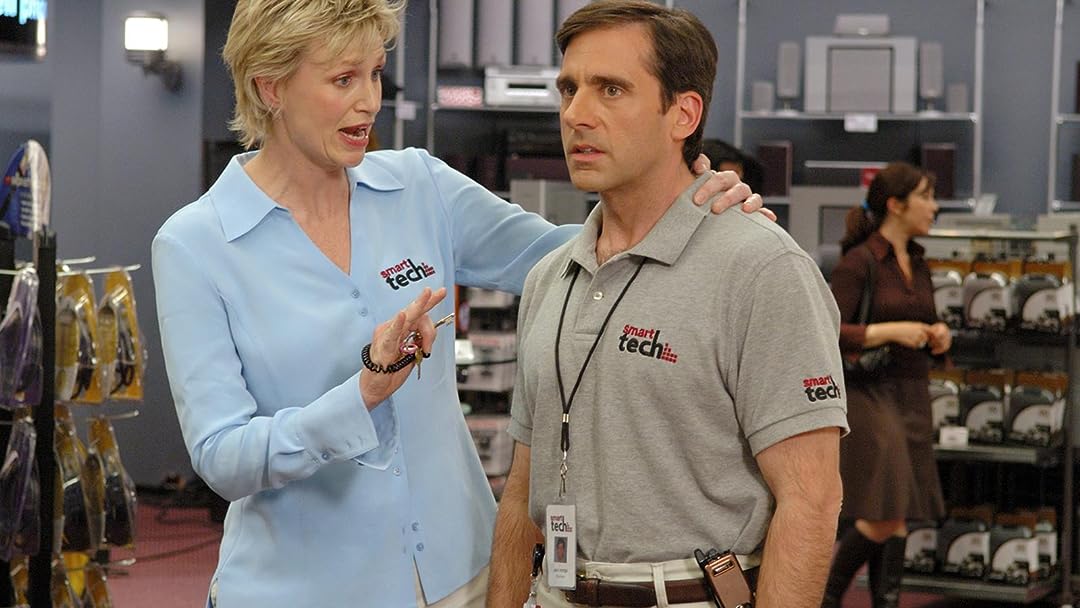 Leaves Cinemax in 7 daysRentals include 30 days to start watching this video and 48 hours to finish once started.

ChuckReviewed in the United States on October 7, 2015
5.0 out of 5 stars
the unbelievable plot is brought to life with an amazing performance from Steve Carell and the all-star cast of ...
Verified purchase
From TV show writer and producer, Judd Apatow [Freaks and Geeks (1999-2000), Undeclared (2001-2003), The Ben Stiller Show (1992-1993), The Larry Sanders Show (1994-1998)], comes his movie writing and directorial debut with an all star cast. Geeky and nerdy Andy (Steve Carell from The Office TV show) is a 40 year old virgin. Missing a player, he’s invited to a poker game with his co-workers, David (Paul Rudd), Cal (Seth Rogen), and Jay (Romany Malco). They befriend him and decide to help him get laid in a series of comical events. Andy meets the drunk Nicky (Leslie Mann), the crazy Beth (Elizabeth Banks), gets offered “friends with benefits” from his boss, Paula (Jane Lynch), has his chest hair ripped out from waxing, and falls for mom, Trish (Catherine Keener). Written by Apatow and Carell with a lot of improved dialogue, the unbelievable plot is brought to life with an amazing performance from Steve Carell and the all-star cast of regulars who appear in Apatow’s later movies [Knocked Up (2007), Funny People (2009) This is 40 (2012), and Trainwreck (2015)]. They draw you into the movie and don’t let go. It’s ridiculously “laugh out loud” funny and worth watching multiple times. It’s one of the better comedies to hit the screen in past decade. There is no wonder it catapulted Apatow in the movie making limelight and helped the careers of the cast. If you haven’t seen it, watch it. If you have seen it but it’s been awhile, watch it again. Trust me, I’m sure you’ve remembered the plot, but there is so much going on in this movie that you probably forgot. It will have you rolling on the floor again.
4 people found this helpful

SoissonReviewed in the United States on May 4, 2022
5.0 out of 5 stars
After all these years...
Verified purchase
This movie STILL makes me laugh my ### off! The extended cut is even better than the theatrical. I did NOT like the musical number at the end. Honestly, after all these years, everyone I know who's seen it still say's the musical ending "Ruins the movie" but, I'm able to look passed it. I love and despite then ending, I'm still giving it 5 stars. Definitely awesome!

NeopacReviewed in the United States on November 20, 2020
3.0 out of 5 stars
Listed as NEW, arrived cracked open
Verified purchase
This item was listed as NEW. When it arrived with two other DVDs it was packaged very well, which leads me to believe that it was not damaged in transit. The plastic case is severely cracked open at the top. I know, it doesn't affect the DVD but when something is listed as NEW, you expect it to arrive in NEW condition.
2 people found this helpful

D. RobertsReviewed in the United States on May 21, 2006
4.0 out of 5 stars
First time for everything
Verified purchase
This movie was not quite as good as many people said it was. However, that's not to say it's not worth seeing - it is. Just that I did not think it lived up to all the hype.

The plot is pretty straightforward: a 40 year old man is still a virgin, and unfortunately his co-workers discover his secret. they try to pressure him in a variety of ways to terminate his virginity. The result is a series of funny-misadventures in which the main persona, Andy, looks like a 40 year old 6th grader.

One of the things that I liked about the film, and one thing that was quite unexpected, was that it did not delve into religious issues. I thought for sure he was going to say that he didn't believe in pre-marital intercourse and / or he was "saving himself" for the right girl. If they had gone this route it would have detracted from the plot; am glad they chose a different direction. Not that I have any problem with the movie ridiculing these two positions if it wants to - I could care less about that. Just that the movie would not have "jelled."

As it stands, there did seem to be some omitted scenes that caused a bit of discontinuity by their absence. The film was not the smoothest direction job I've ever seen. But, since it is a comedy, direction is secondary.

All in all, if you like Romantic Comedies with some party movie humor interspersed, this one might be right up your alley.

h2oReviewed in the United States on October 30, 2013
5.0 out of 5 stars
love in all the wrong places...
Verified purchase
If your working in a business,and your friends find out your a "virgin"....well, this is what could happen if they get together and try to fix that problem for you...40 years without "doing it"...a man that lives alone in a duplex, with older folks above him, with his unusual hobby of collecting action figures that are displayed through out his living area for all to see, and he rides a bike to work everyday because he has no car....well the guys at work are going to show him how to land that perfect woman....is this good advice? or bad advice?..this journey begins with getting him exposed to the bar scene, and from there it's side splitting laughter...this movie has a lot of profanity, a lot of sexual throw backs at each other...men being men who are helping Andy, find that true love...if you don't like a lot of profanity then this movie is not for you...and in the unrated version it has an extra 17 minutes added, plus unrated exclusives...Steve Carell was perfect for this role....
2 people found this helpful

MultiWonder29Reviewed in the United States on October 27, 2012
5.0 out of 5 stars
Hurrah! Finally the superior Theatrical Cut is on Bluray!
Verified purchase
When I saw the 40 Year Old Virgin in the cinema I was blown away by how funny and yet sincerely heartfelt it was. It was literally the best comedy I'd seen in a decade.

Unfortunately when it came out on DVD/Bluray, they originally released it only in an Extended Cut. It was funny, yes, but it was overlong. The extras scenes undercut all of the drama and ultimately cheapened the film. I was so disappointed.

Finally this superb film can be enjoyed in the way it was intended. This is one of those rare occasions where less is definitely more.

The great thing about this release is that you get both the Extended and Theatrical cuts, so you can make your own mind up.

(Note: The Theatrical Cut WAS released briefly on DVD, but only - perplexingly - in 4:3, so the sides were cut off the edge of the screen.)
4 people found this helpful

D. S. ChowesReviewed in the United States on November 16, 2014
5.0 out of 5 stars
'THE 40 YEAR OLD VIRGIN" TEACHES US A LESSON
Verified purchase
Steve Carell and the entire cast of "40," are amazingly hilarious and superb in their roles. The film is unusually forthright about the way males view women and sex. They brag about their recent conquests -- the more dirtier, the better and more status is given to them by their friends. But, don't be confused for the inherent ethics and morality that is inherent in this series of sketches basically leaves a message: sex is pleasurable -- but sex plus love in a really caring relationship brings communion and is the most fulfilling and should be desired.

This DVD version has about 20 extra minutes. I won't spoil the film for you and inform you as to whether Mr. Carell remains a virgin at 41. You'll have to view it to find out.

I thought that knowing Steve Carell is such a superb comic actor -- well, that's the reason I ordered it via Amazon.com. But, besides the humor, this film can act as a moral template for our age which seems to view sex and women and toys that are really just to be used to amuse yourself with.

Mr. Carell, incidentally is a former member of the endless list of people who received their training at Second City (improvisational theater) which is located in Chicago and Canada.
2 people found this helpful

Wanda B. RedReviewed in the United States on March 30, 2006
4.0 out of 5 stars
Indeed Virginal
Verified purchase
I'm flummoxed by the way that debate here about this film has degenerated into "maturity" vs. "immaturity." I would say this opposition is profoundly beside the point. Of course, this movie is immature. It's about VIRGINITY, for goodness sake. Its genius is in transforming the nervous giggling that revolves around this topic into hearty and cleansing laughter.

In short, by all means, buy or rent this movie. There is nothing wrong with it. It's delightful. You will not find a single person who saw it in the theater who did not also hear the silver chimes of giggling and laughing from everyone there. It's an adorable and innocent film (whatever, someone uses the "f"-word; that's still a pretty childish gesture).

Okay, to finish, some kudos: Steve Carell -- sweet and hilarious, native Massachusetts boy & should have gotten an academy award (though he did steal the shaving scene from "Hitch"); Paul Ruud, always wonderful (I dread the day you are too old to play these heartbreaking ingenue parts); Seth Rogen, a god -- I learned to love this actor from "Freaks and Geeks" -- he has the understated thing down pat; Catherine Keener, the most brilliant performance in the movie -- she keeps things emotionally honest.
3 people found this helpful
See all reviews
Back to top
Get to Know Us
Make Money with Us
Amazon Payment Products
Let Us Help You
EnglishChoose a language for shopping. United StatesChoose a country/region for shopping.
© 1996-2022, Amazon.com, Inc. or its affiliates