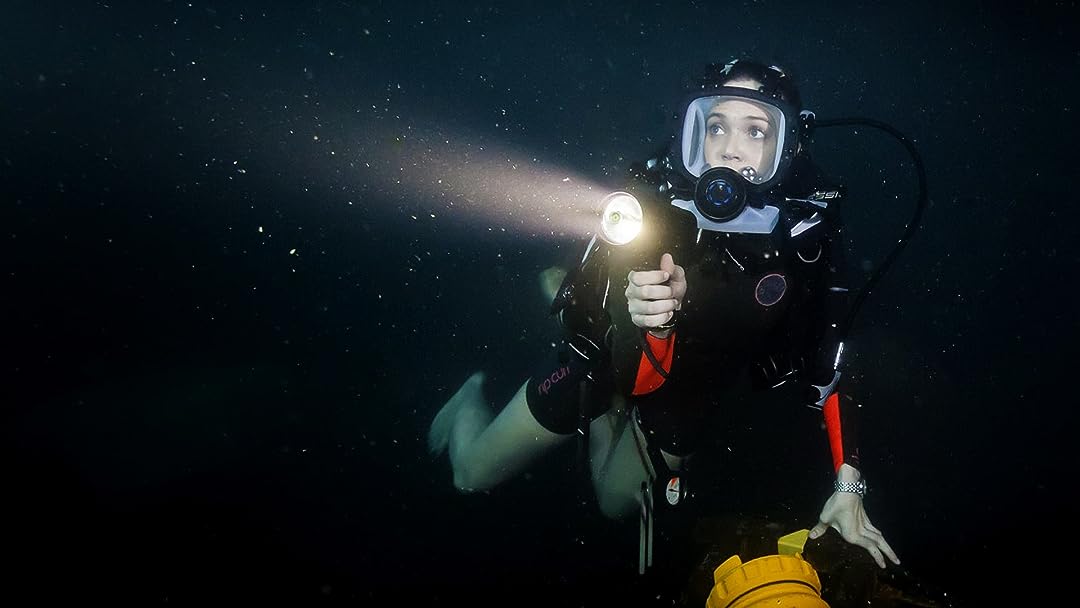 (5,967)
5.61 h 29 min2017X-RayPG-13
Two sisters, vacationing in Mexico, are trapped in a shark cage at the bottom of the ocean, with little oxygen and great white sharks circling nearby.

Melanie CReviewed in the United States on April 19, 2020
2.0 out of 5 stars
Painful to watch - bad concept from the start
Verified purchase
This is one of those movies where 'it looks great' to the layperson, but the tech and 'backstory' is so bad, that if you know ANYTHING about diving, you realize this started 'jumping the shark' (pun intended) from the first few minutes.
From poorly explained dive science (you don't 'automatically' get the bends from nitrogen bubbles 'on the brain') and you don't put a group of tourists in a shark cage without a knowledgeable guide (who is an experienced diver). You don't have sharks hunt you like a meth'd out manhunter, either...and when you dive without a wrist compass, or dive knife...well...idiot tourists SHOULD be on the 'menu'. This was a movie MADE-BY-MURPHY about just how much POSSIBLY COULD go wrong on a number of dives...not all in one dive!
I was left with questions like 'what is the drama here, that they dove with sharks for their first time, that the sharks wanted to eat them, that they were going to drown from lack of sufficient air, or that they were locked in a cage at the very lower limits of 'amateur diving'? I was confused...and about mid-movie, I realized...the shark was so much more on his game than the 'shady charter boat captain', his 'non-experienced shark assistants' or the moronic girl clients that they put in a shark cage without a guide....so, I was FORCED TO ROOT FOR THE METH'D OUT MONSTER KILLER SHARKS (which were Great White Sharks...called 'nurse sharks' once in the script, just for 'OMG' good measure).
AVOID THIS MOVIE...GO SEE SHARKNADO...at least it doesn't take itself THAT SERIOUSLY!!!

D.RichmondReviewed in the United States on August 10, 2019
5.0 out of 5 stars
Another shark movie worthy of existence.
Verified purchase
I love Jaws, Jaws 2, and Jaws 3-D was a childhood staple that I know nostalgia still favors.

That said, I've gone on to love the following and aside from missing a John William's score, I'd say THE SHALLOWS is actually the heir apparent to Jaws. It is incredible viewing experience.

Below this films at the awesomely fun BAIT, SHARK NIGHT, and DEEP BLUE SEA.

Somewhere in between JAWS/SHALLOWS is 47 Meters, a smaller scale feeling outing. But the underwater cinematography and the attention to suspense was absolutely enveloping. I felt like I was down there with them, trapped, and wanting to try other options than what they tried. I don't normally yell at the scream--and if I usually do it's because the characters are dumb. I don't think so here, the situation is a lot more complicated and one I don't think I would survive.

Me in FLReviewed in the United States on January 16, 2018
5.0 out of 5 stars
Give this movie a try!
Verified purchase
I know it got bad reviews but I liked it. I'm a fan of this type of movie and watch all those "bad" shark movies on SyFy too. While liberties may have been taken with facts, it has jumps, plot twists and edge of seat tension. I enjoyed it more than most shark movies!
32 people found this helpful

ThatsMrGrinch2UReviewed in the United States on December 12, 2017
4.0 out of 5 stars
Good Shark Movie
Verified purchase
I love killer shark movies (with the exception of the bad Sharknado movies - ugh!) and this one was a decent watch. Very suspenseful, terrifying, and claustrophobic as these two women are trapped at the bottom of the ocean in a botched shark cage expedition. This is along the lines of The Shallows -- another great shark movie.
21 people found this helpful

JBurrReviewed in the United States on November 21, 2018
4.0 out of 5 stars
Surprised
Verified purchase
First off, I only tuned in to this movie because I was bored and shark movies can be intriguing. I didn't expect much honestly, although the fact that Mandy Moore was in it was somewhat random and interesting. I gotta say...it was pretty good actually. They did a decent job on visuals and the acting and story was good enough. Very entertaining, I recommend giving it a go if you're looking for some suspense and to never enter the ocean again.
9 people found this helpful

MattReviewed in the United States on February 24, 2021
5.0 out of 5 stars
first of its kind, innovative, relentless, and suspenseful
Verified purchase
Like in Open Water, the sharks are just background menace. The scenario itself is what's terrifying. Atmospheric and is incredibly claustrophobic. Highly confused why this movie is so underrated. I vastly prefer it to The Shallows. It was made first on a fraction of the budget. They shelved it and it was gonna get dumped on DVD, but The Shallows made money and got good reviews so it went theatrical and I think was one of the most profitable movies that year. But people kinda dismiss it. I hold it in the same regard as Gravity. There had never been a movie that takes place almost entirely underwater. I think it influenced not only its inferior but fun sequel, but Underwater and the really good foreign film Breaking Surface. Can't believe they made this for like 4 million. I'm glad it found its audience but I don't think it gets enough credit for breaking new ground and being as suspenseful as it is. I know the scuba science is perfect but a lot of the complains seem to be about priorities and bad advice which can be explained by how sketchy and unprofessional the whole setup was to begin with
2 people found this helpful

Anonymous Reviewed in the United States on January 5, 2018
5.0 out of 5 stars
Scary and claustrophic!
Verified purchase
I loved this movie! I am claustrophobic and afraid of drowning so for me this was the ultimate in fear and suspense. The girl's acting was pretty good. Some parts were not so believable but still the shark scenes were frightening and well done. I've watched it twice. Recommend.
14 people found this helpful
See all reviews
Back to top
Get to Know Us
Make Money with Us
Amazon Payment Products
Let Us Help You
EnglishChoose a language for shopping. United StatesChoose a country/region for shopping.
© 1996-2022, Amazon.com, Inc. or its affiliates