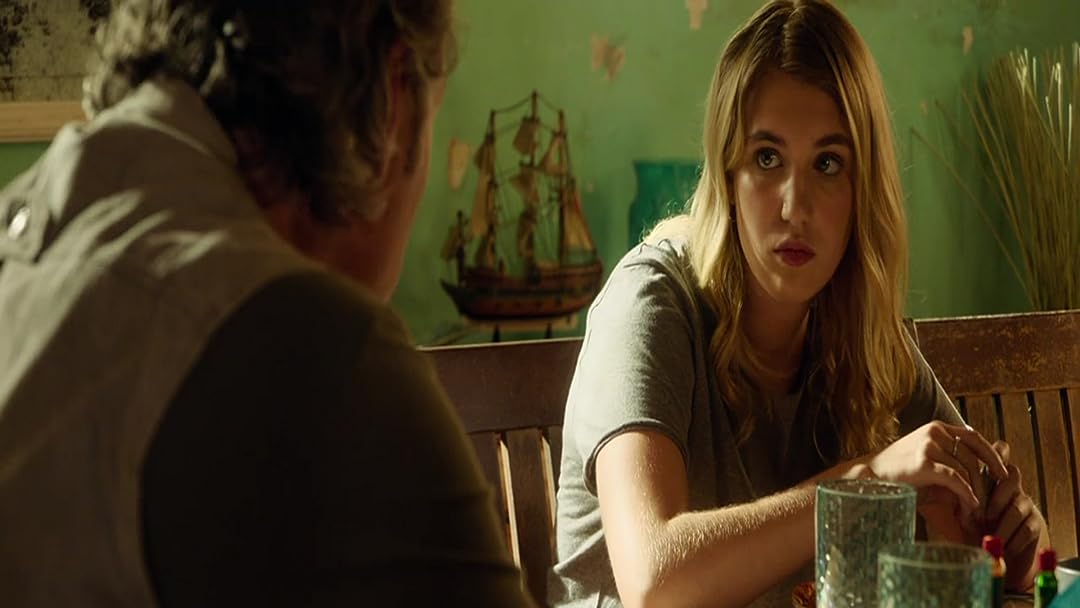 Leb PittmanReviewed in the United States on November 14, 2019
2.0 out of 5 stars
To bad the sharks didn't eat all those stupid girls!!
Verified purchase
This was strictly a movie for teenagers. I have rather be eaten by a shark than sit through this movie again.
352 people found this helpful

JuleikaReviewed in the United States on October 30, 2019
4.0 out of 5 stars
Nonsensical fun
Verified purchase
As a scuba diver who has been fortunate enough to spend many hours with sharks (including in caverns), I can still give this movie 4 stars. Of course it's silly, but hey, we all knew we were going to watch a bunch of screaming teenage girls. Of course some of their decisions (including Dad's) were painfully stupid, but again hey, it's a horror movie! And as that, it's really well done and a lot of fun. If they had made all the right decisions the movie would be 20 minutes long and nobody would have been hurt. What's the point of that?? :-)
193 people found this helpful

B. L. WrayReviewed in the United States on February 21, 2020
2.0 out of 5 stars
I am not entirely sure the director knows what water is.
Verified purchase
So, I do not know where to start with this movie.

1 - It is set in the most California, Mexico you can ever get.... I am not even sure there is a Mexican person in the entire movie.
2 - I don't think the actresses know how to swim.
3 - I am not sure the director knows how water works.
4 - No one seems to know how sharks work.

Put all three of those issues together and it really spoils what could be a good claustrophobic survival movie. Basic plot, four mildly attractive teenagers skip a shark viewing boat trip with classmates to go hang out at a sink hole where two of the girls (who are sisters) dad was setting up equipment for cave exploration. The girls decide to dive the cave and after a cave in blocks their way out they have to flounder and flail and hyperventilate their way out of their before they run out of air.... meanwhile they are being chased by a plot seeking shark that both senses sound/vibration and ignores it when the plot demands it. There is a scene where the girls are supposed to be swimming thru a strong ocean current but the director ramped that scene up to 1000% and you swear they were trying to swim thru a F5 tornado.... it's laughably dumb.

Watch this movie with friends and beer.

G. MartinReviewed in the United States on December 28, 2019
1.0 out of 5 stars
Incredibly Bad Movie!
Verified purchase
I will keep this brief to avoid spoilers this definitely is amongst the worst shark movies I have every seen and their certainly are a lot of bad ones. If you like watching four teenaged girls panic and scream underwater and a shark that looks incredibly fake this is for you. Otherwise avoid. I only paid $2.99 on demand and even that was too much.
82 people found this helpful

FrankReviewed in the United States on December 31, 2019
1.0 out of 5 stars
Stupid plot.
Verified purchase
Saying it's strictly for teenagers is unfair to teenagers. Most of the teens I know are smarter than that. Huge blind sharks in a cave where there's nothing for them to eat? First they're out of air then they go back to find another exit? The water is sucking them down to where, exactly? Somewhere in there I just gave up on it. Stupid plot sloppy writing. Oh and how come nobody had any swim fins? Maybe they weren't in the movie budget
60 people found this helpful

GrelfReviewed in the United States on November 14, 2019
2.0 out of 5 stars
Predictability kills the suspense
Verified purchase
Pros:
Good tension combination using confined spaces, risk of drowning, plus the immediate threat of sharks. The acting was acceptable. The actual shark models used looked great. Decent use of camera panning and perspective changes to augment the escalating moods throughout the film.
Cons:
Unfortunately, nearly every moment of suspense was far too predictable that it detracted from the horror of each situation. The audio and music crescendos intended to boost suspense and divert expectation, ended up giving each death away, as it's done in the same way as nearly every modern horror film. Situations like:
"Hmm, I haven't heard any music for a few seconds during this monologue. It's as if character X is about to be killed in 3...2...1...aaaand yep, there they go..."

**Minor Spoiler**
Other than clarifying the protagonist's geeky personality at the beginning of the film, the purpose of the bully seemed rather irrelevant to the movie, especially with the last scene she is in. Overall, the protagonist being a geek really didn't add anything to the film as well.
49 people found this helpful

Amazon CustomerReviewed in the United States on November 25, 2019
2.0 out of 5 stars
Not worth $5.99
Verified purchase
This movie doesn’t compare to the first one. It is full of jump scares and convenient encounters with sharks when unnecessary. The sharks in this movie have no sight and catch their prey using sound but one of the deaths wasn’t even triggered by a sound. Many times in the movie the girls were either yelling or speaking and they didn’t die in that instant. This movie is a disappointment and waste of my time. I just feel that the first movie was good because it was more realistic. Overall I wouldn’t recommend anyone to see this movie.
45 people found this helpful

D. R.Reviewed in the United States on March 1, 2020
1.0 out of 5 stars
It's fun only if you have no idea...
Verified purchase
This is the kind of movie, like those jokes that are so stupid that cause laugh, but not because are that funny. This is so ridiculous that I don't even know where to start. The storyline is as absurd as a lion evolving to live inside an Egyptian pyramid and having a healthy diet of "fresh" human meat from Pharaoh's mummies and occasional tourists.
It's a good movie if you are drinking and are the only guy with a few females watching. But for people who love cinematography this movie might be offensive. I truly don't see any diver or professional related giving any praise to this movie. At the end you can watch this movie and saying how much you enjoy it and why, but saying it is a good movie, only tells how much you lack in general culture.
17 people found this helpful
See all reviews
Back to top
Get to Know Us
Make Money with Us
Amazon Payment Products
Let Us Help You
EnglishChoose a language for shopping. United StatesChoose a country/region for shopping.
© 1996-2022, Amazon.com, Inc. or its affiliates