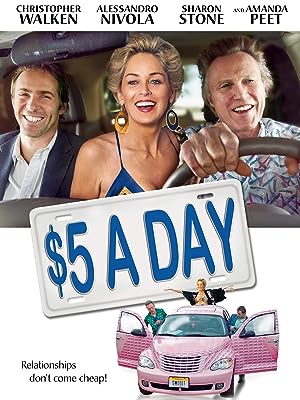 (73)
6.31 h 37 min2010PG-13
Nat, an eccentric con-artist and deadbeat dad dying to reconnect with his troubled son, Flynn. Diagnosed with a terminal illness, Nat shanghais his reluctant son into driving him cross-country for experimental medical treatment. Low on cash, they pull off increasingly ridiculous and embarrassing schemes along the way to reach their destination spending only $5 a day.

MadMacsReviewed in the United States on March 11, 2011
5.0 out of 5 stars
One Of The Best Road Trip Movies...
Verified purchase
One of the best and most poignant road trip films I've ever seen.

Christopher Walken, who has the reputation for being the "scariest man in the movies", has really taken the last decade to smooth out that resumé with fun quirky comedies. And it's in this field of endeavor that he really shines.

The saying is that any actor can do drama, but only a select few can do comedy - the man has proven he can do both. And, as it happens, he executes both in this excellent indie film. Proving in my mind, and without a doubt, that he's one of the finest actors to have graced the silver screen.

Walken delivers a sublime performance as Nat Parker, a small-time grifter out to finish the game with a winning hand while simultaneously attempting to repair the rift between himself and his estranged son.

And in a small but singularly delicious role, Sharon Stone portrays Dolores, a sun-hued seductress and lifelong friend who helps him settle the score with an old nemesis.

I'm a huge fan of road trip flicks - since that confined crucible often creates the most endearing characters seen in films. If you enjoyed "[[ASIN:B000K7VHQE Little Miss Sunshine]]" or "[[ASIN:B00008H2LV Roadside Prophets]]" you won't be disappointed with this indie.

David E. BaldwinReviewed in the United States on June 17, 2012
5.0 out of 5 stars
Ideal Father's Day Flick
Verified purchase
If there isn't a disconnect between Richie Flynn(Alessandro Nivola) and his father, Nat(Christopher Walken) there's definitely some uneasiness. Richie did an 11 month stretch for taking the heat for one of Nat's schemes and took a health inspector job upon his release. Out of the blue Richie gets a message from Nat that he's dying and he needs a lift to Mexico for an experimental treatment. That's when the fun begins. Nat spends his life cadging freebies and on their road trip there are any number of opportunities. Whether bumming a free birthday meal at IHOP or crashing a trade convention dinner you will be simultaneously amused and repulsed at Nat's audacity. You can sense the pride in his voice as he relates how he swung a deal for $50.00 at the Howard Johnson lobby for his wedding reception. My wife, who never met a deal she didn't like, was taking mental notes while we were watching the movie. This is the perfect vehicle for Walken's independent streak. His deadpan sense of humor makes Nat's guile more palatable. The film is at turn funny, poignant, and moving without being maudlin. A definite must for the adventurous film lover.
3 people found this helpful

Yiannis PReviewed in the United States on December 25, 2018
4.0 out of 5 stars
Worth Seeing Just for Christopher Walken and Sharon Stone
Verified purchase
A pleasant storyline but with one of the protagonists (Alessandro Nivola, playing the son) never quite making it. But Walken and Sharon Stone (in a brief but electric presence) made for a pleasant viewing.

SickLittleBoyReviewed in the United States on June 26, 2012
4.0 out of 5 stars
-It's Ok-
Verified purchase
I purchased this one for $2.89 including shipping. I enjoyed this film as it had a lot of funny moments, and I think Christopher Walken did a fairly decent job in it. Sharon Stone has a tendency to get on my nerves but was actually all right, plus she's only in it for a second or so. Light-hearted and easy to watch, my wife even liked it, and she is often times overly critical of movies in general. The picture and sound quality are good, and it was worth the price I paid, no problems with the disc whatsoever.
4 people found this helpful

KathyReviewed in the United States on June 7, 2019
4.0 out of 5 stars
Good deal
Verified purchase
Comedy

V. DentalReviewed in the United States on February 6, 2018
5.0 out of 5 stars
Five Stars
Verified purchase
Epic.

Jet CeteraReviewed in the United States on August 21, 2011
5.0 out of 5 stars
Enjoyable
Verified purchase
For Christopher Walken and Peter Coyote fans, this is pretty much guaranteed to be enjoyable. Walken still has a thoroughly compelling screen presence and owns every scene. But the entire cast is solid, the writing is tight, the cinematography and direction provide a nonstop visual oasis, and perhaps all of this tends to underscore that the screenplay itself is not deep. Far from it, the storyline is very surface but yet contains enough twists and turns that the audience is subtly reminded that people's motives, good and bad, can be very mysterious indeed.
6 people found this helpful
See all reviews
Back to top
Get to Know Us
Make Money with Us
Amazon Payment Products
Let Us Help You
EnglishChoose a language for shopping. United StatesChoose a country/region for shopping.
© 1996-2021, Amazon.com, Inc. or its affiliates