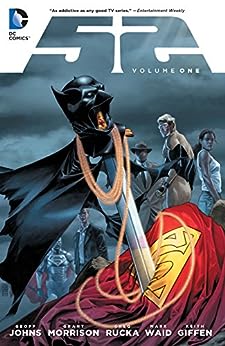 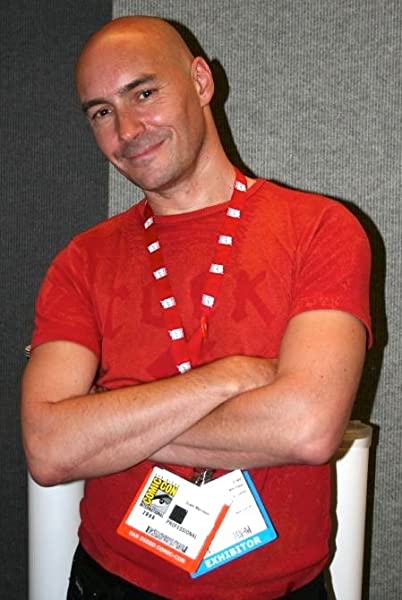 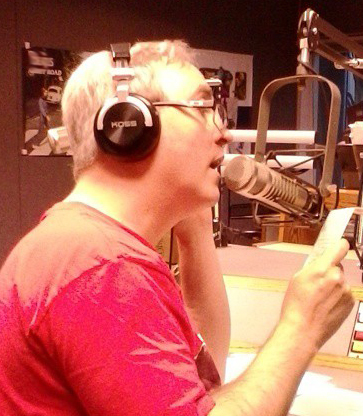 DC's groundbreaking publication of the weekly comic 52 tells the story of a "missing" year in the DC Universe—in real time. The cataclysmic events of INFINITE CRISIS have left the world without its three biggest icons—Superman, Batman and Wonder Woman¾and the question is asked: who will stand up in their absence?

Now, in the first of two volumes, 52 is collected with bonus material after each chapter, including concept designs, page breakdowns, scripts, alternate story elements, and more! Collects 52 #1-26.
Read more
Previous page
Next page
Kindle e-Readers
Fire Tablets
Free Kindle Reading Apps
Available on these devices
All 2 for you in this series See full series 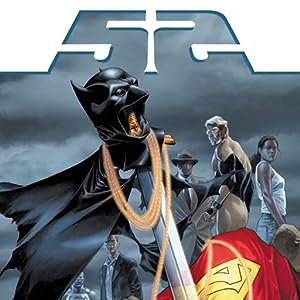 “An intriguing set of interlocking stories that look to take full advantage of the DC Universe's depth, teaming characters in unexpected arrangements and playing off the emotional aftershocks of Infinite Crisis.”—A.V. CLUB/THE ONION

“[A] grand experiment. . . .fun.”—VARIETY.COM --This text refers to an out of print or unavailable edition of this title.

Writer Grant Morrison is known for his innovative work on comics from the graphic novel ARKHAM ASYLUM to acclaimed runs on ANIMAL MAN and DOOM PATROL, as well as his subversive creatorowned titles such as THE INVISIBLES, SEAGUY and WE3. He has also written best-selling runs on JLA, SEVEN SOLDIERS OF VICTORY and New X-Men and recently helped to reinvent the DC Universe in ALL-STAR SUPERMAN, 52 and BATMAN. He has also written JOE THE BARBARIAN, BATMAN AND ROBIN and THE RETURN OF BRUCE WAYNE. --This text refers to an out of print or unavailable edition of this title.

Amazon Customer
2.0 out of 5 stars Ripped pages and cracker crumbs
Reviewed in the United States on April 19, 2019
Book is not in acceptable pages torn was a library book so it has stickers on it and has had many reads it looks like the thing that I really dont like is what can only be described as cracker crumbs shoved in middle of the book all the way in the spine of book had to do an extensive amount of cleaning to it wasn't easy so that's why they only get 2 stars flip through a book before you ship it it's not hard doesn't take long
Images in this review

clairetoldmetochangemyscreenname
5.0 out of 5 stars One Half of the Groundbreaking Event Comic from a Creative Team of DC All-Stars
Reviewed in the United States 🇺🇸 on May 17, 2017
Verified Purchase
One of the most impressive feats in DC's publication history! Following the events of Infinite Crisis (which you'll want to have read to fully grasp the lead in to this story), DC's Trinity (Batman, Wonder Woman, Superman) take a year off to recenter themselves and learn how to trust one another again after the rifts that formed during the Crisis. In the wake of their year off, a roster of B-List heroes are forced to step up to protect the DC world until the lead heroes return. 52 was a weekly series (one issue for each week of the year) written by an all-star creative team including Grant Morrison, Greg Rucka, Geoff Johns, and others. Essentially the best writers for the company came up with this well-plotted, amazingly executed story; rereading the book I was struck just how carefully the team planted the numerous seeds that slowly come to fruition throughout this tale. This first volume contains the first half of the series (issues 1 through 26). Keep in mind that 52 is also sold as a single massive omnibus that collects every issue, as well as a group of four trades that break the story into fourths. Buying these two big halves is a lot more cost effective that the single omnibus.

The story of 52 features numerous characters exploring their own separate plot lines until they slowly begin to start crossing over with one another. Booster Gold attempts to become the new number one hero in Metropolis with Superman gone, only for his limelight to be stolen by a newcomer hero named Supernova. Lex Luthor sets out to clear his name after the revelation of his doppelganger Alexander Luthor being the mastermind behind the Crisis; Lex attempts to develop a new gene therapy that will give any normal human superpowers and uses Steel's niece as his first test subject. Adam Strange, Animal Man, and Starfire are stranded in space after the events of the Crisis and the Rann-Thanagar War and have to use their wits and a little help from unexpected allies like Lobo to return to Earth. The former Elongated Man Ralph Dibny begins an investigation into a cult that springs up around Superboy after his sacrifice during the Crisis. Black Adam, enraged that he was duped by Alexander Luthor during the Crisis, returns to his home country and begins a plan to instill and new brutal form of justice on super-powered criminals. Finally, Renee Montoya is approached by Vic Sage, the Question, about joining his investigation into Intergang and their plans to take over Gotham. All in all these disparate characters and plots form one of the best events DC has ever published. An absolute must have for fans.

CB Review
4.0 out of 5 stars Not For Everyone
Reviewed in the United States 🇺🇸 on September 17, 2019
Verified Purchase
52 is an interesting experiment in letting the heavy hitters (Batman, Superman, Wonder Woman) disappear for a while after Infinite Crisis, and focusing instead on secondary characters who usually get less of the limelight. Characters like Renee Montoya, The Question, Booster Gold, and Animal Man (a personal favorite of mine). It's less of a cohesive story and more of a handful of parallel plots that loosely coalesce eventually. I don't recommend this to most readers for a couple of reasons--the story is disjointed and requires a lot of background knowledge, and in addition the characters it focuses on aren't for everybody. That being said, I personally quite enjoyed it (even if it dragged a bit in the second volume). So I'd cautiously recommend it if you read a lot of DC in general and have even a passing interest in a few of the secondary characters that lead the story--otherwise, it's not a necessary read and most people will be okay not getting this one.
Read more
6 people found this helpful
Helpful
Report abuse

Jill Rose Catt
4.0 out of 5 stars A fun ride
Reviewed in the United States 🇺🇸 on May 13, 2020
Verified Purchase
This is a fun ride through the DC Universe without the big guns. It's like a sprawling multi stage novel; it's funny and usually well drawn. Some minor characters get starring roles. I read this during the 2020 pandemic when no new comics were coming out and it satisfied my need to read a few books a night.
Read more
Helpful
Report abuse

Dan
5.0 out of 5 stars 52 is a weekly comic done correctly.
Reviewed in the United States 🇺🇸 on August 21, 2020
Verified Purchase
It’s a great story that exemplifies DC at its finest with an incredible ending.
Read more
Helpful
Report abuse

Easy Siverly
5.0 out of 5 stars Highly Recommend
Reviewed in the United States 🇺🇸 on January 19, 2018
Verified Purchase
Classic Morrison here. I love the fact that he dives deep into the history of some lesser known super heroes. Booster Gold is a terrifically written character. I would recommend this for anyone who wants a really in depth story without the Trinity.
Read more
Helpful
Report abuse

Bob Shaker
5.0 out of 5 stars The best 52 value for your buck
Reviewed in the United States 🇺🇸 on July 18, 2018
Verified Purchase
52 is a rare weekly series where everything somehow managed to come together in a perfect way regarding the plot and pacing. This collection is the most cost-effective way to collect the series.
Read more
Helpful
Report abuse
See all reviews

Mars
5.0 out of 5 stars Fan-BLOODY-tastic!!
Reviewed in the United Kingdom 🇬🇧 on May 30, 2017
Verified Purchase
One of the best comics I have ever read. I loved it. Gripping story lines featuring under used heroes, quality artwork. End was a bit "What the Hell's going on!?" but I assume that's going to be cleared up in book 2. I would recommend you read INFINITE CRISIS before getting stuck into this one though.
Read more
Report abuse

T.E. Hodden
5.0 out of 5 stars Wonderful
Reviewed in the United Kingdom 🇬🇧 on March 11, 2017
Verified Purchase
Some of the best comics, you will ever read, this collection is the first half of a sprawling epic, that will keep you hooked to the bitter end
Read more
Report abuse

Oliver Hudd
5.0 out of 5 stars Great read!
Reviewed in the United Kingdom 🇬🇧 on December 29, 2016
Verified Purchase
Perfect for any fan of lesser known heroes such as Booster Gold, the story gives a fantastic insight as they are the main characters in the story.
Read more
Report abuse

AKV
5.0 out of 5 stars The bridge between Infinite Crisis and Final Crisis
Reviewed in India 🇮🇳 on August 16, 2020
Verified Purchase
52 is an excellent weekly series by DC powerhouse writers like Grant Morrison, Mark Waid and Greg Rucka. Serving as an excellent bridge between Infinite Crisis and Final Crisis - it expands on more Hypercrisis lore such as Intergang, The Bible of Crime (propagated by the Darkseid worshipping intergang), Batwoman, Luthor's meta machinations and more. Essential to the golden years of Morrison-overlooked mid 2000s DC.
Read more

AKV
5.0 out of 5 stars The bridge between Infinite Crisis and Final Crisis
Reviewed in India 🇮🇳 on August 16, 2020
52 is an excellent weekly series by DC powerhouse writers like Grant Morrison, Mark Waid and Greg Rucka. Serving as an excellent bridge between Infinite Crisis and Final Crisis - it expands on more Hypercrisis lore such as Intergang, The Bible of Crime (propagated by the Darkseid worshipping intergang), Batwoman, Luthor's meta machinations and more. Essential to the golden years of Morrison-overlooked mid 2000s DC.
Images in this review