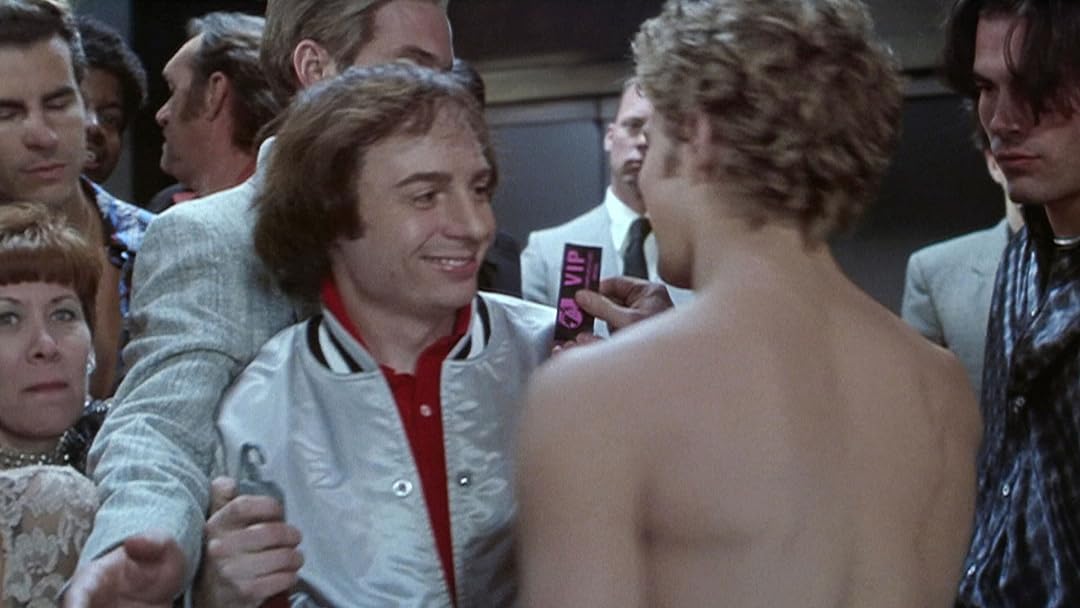 (1,603)
5.81 h 40 min1998R
Shane, a Jersey boy with big dreams, crosses the river in hopes of finding a more exciting life at Studio 54. When Steve Rubell, the mastermind behind the infamous disco, plucks Shane from the sea of faces, Shane lands a coveted job.

S. MessererReviewed in the United States on June 5, 2016
5.0 out of 5 stars
the best performance of his career
Verified purchase
I am a huge fan of the film, 54. I saw it in the theater when it first premiered in 1998 and I thought it captured the hedonistic-lifestyle of late-seventies New York with accuracy and decorum. When “disco-fever” swept the nation, I read vehemently any (and all) articles about the famed NY nightclub, Studio 54, and was obsessed with it for many years. The portrayal of Steve Rubell by actor, Mike Meyers is uncannily accurate and is, perhaps, the best performance of his career. The other actors do a fine job and you, as the film goer, get a chance to go back in time and take a peek behind the closed doors of a world cut off from the rest of humanity.

Most directors’ cuts are films that are already established and the alterations are minimal, creating more of an “extended cut” made up of parts that were trimmed by the censors (MPAA). With 54, it is truly a different film made up of unique shots, lost footage and occasionally, VHS dailies. The film takes a much darker turn as we discover how drugs affect much more of the characters’ lives than the original. We also see how the Ryan Phillippe’s character, Shane O’Shea is not only used as a gigolo by women, but many men, as well.

There is an informative “making of” featurette with the film’s director, Mark Christopher and producer, Jonathan King where they talk about how the original film was wrestled out of their hands by the studio after a test screening, “The audience who was responsive to the movie was not the audience who we made the film for.” And, the laborious and daunting task of tracking down the original film elements by Nancy Valle.

If you are a fan of 54, you will be in for a real treat. If you didn’t like the original version of 54, you may want to take a peek at what the director originally intended. If you are a film student, you will be fascinated by how editing can completely alter a film’s narrative. There is something for everyone in this new director’s cut.

A small warning: Though most of the original elements were discovered, the editor had to resort to using the original VHS dailies to make up some missing scenes. This is a bit of a distraction as the film suddenly changes from crystal- clear Blu-ray quality to grainy VHS on multiple occasions. I was surprised this was not noted anywhere on the Blu-ray’s cover. For the casual film watcher, this may be a deterrent. For the fanatic, seeing these missing scenes, in any quality, will only add to the experience. I just wanted to mention it so you will know exactly what to expect.

DMReviewed in the United States on October 10, 2016
5.0 out of 5 stars
It's a great evocation of an era when for a brief time ...
Verified purchase
*Spoiler Warning*

The director's cut is a revelation, the need for which shows how paranoid Hollywood can be about any display of homosexual activity in the movies, however minor. Of course things have changed a lot since the theater version of the movie was released, but not all that much. Ryan Phillipe's character is quite frankly presented as bi-sexual, and not in any kind of "ashamed and struggling with it" way, remarkable for 1999. It's simply presented in the context of the hedonism of the era.

The way this was edited out is especially clear in the "raising my profile" scene , the theater version outtakes of which are on YouTube. To name only one example, the character is shown waking up next to three different partners in quick succession in both versions, but in the director's cut one of these is a handsome young man, replaced by a voluptuous young woman in the theater version.

It's a great evocation of an era when for a brief time everything seems possible, in this case the sexual revolution - thrilling illusions, while they last. And while there is usually a price to pay the morning after, it doesn't necessarily mean you regret having been at the party.
25 people found this helpful

JancalReviewed in the United States on March 1, 2018
3.0 out of 5 stars
The more decadent version
Verified purchase
Having seen the original release of 54 several times, the Directors Cut just extends the debauchery of the disco nights at Studio 54, particularly the personal life of Ryan Phillippe's bartender character, who is more sexually ambiguous and does heavier drugs such as freebasing cocaine. He is a lost soul in a hazy night club world of sex, drugs & disco music, even sleeping with his best friend's wife and later making a pass at the guy also. I lived through those times, and frankly, although the excess is probably true, I prefer the toned down first release where his character at least has some redeeming qualities and vulnerability
15 people found this helpful

N. SingletonReviewed in the United States on January 25, 2019
5.0 out of 5 stars
Both versions have their positives and tell drastically different stories
Verified purchase
I am so happy that 20 years after seeing 54 in the theaters, I finally got to see the director's vision and all of the scenes rumored back then that were scrubbed when the studio decided to sanitize the character of Shane (played by Ryan Phillippe) of all of his bisexuality. All of that is restored here - the kiss with Breckin Meyer as well as a couple of other male/male kisses and bisexual sex scenes. This movie was definitely just a tiny bit ahead of its time (for perspective, the TV show Queer As Folk would debut in the USA just a few years later and TV/movies today will make you chuckle at the studio for removing these scenes 20 years ago when you see them).

For everyone who is commenting about the graininess of the scenes that were added back in, that is explained in the commentary as well as a special making of feature in the extras as these scenes were on VHS dailies that were set to be destroyed only 5 days after they were discovered. And, as the director states, you can't exactly restore VHS to the Blu Ray quality of today and they did the best they could with what they had. I, for one, am more than happy that the scenes are even there and were found to begin with!

I highly recommend if you are as big of a fan of this movie (and Ryan Phillippe) as I am, get both versions. I don't think the theatrical cut is available on DVD/Blu Ray anymore but I purchased it digitally just so that I can have it in addition to this Blu Ray. The two versions present Shane's story in two very different ways and, if you like Shane's narration like I do, that is much more prevalent in the theatrical version than in this one. I only wish there was a way to mesh the two versions together into one but, alas, I'll just be satisfied to have both versions to watch again and again whenever I want :)
8 people found this helpful

en sabbah nurReviewed in the United States on April 29, 2018
4.0 out of 5 stars
Well worth it if you liked the original.
Verified purchase
Better then the original for sure, there were tons of little additions and dialog changes that fill in a lot of questions the original left wide open and also makes other things from the original that made no sense at all fit into better context. The audio mix is also changed to sound as if you're in the club, a simple change that really makes a huge difference in my opinion. There are times when the video quality drops due to the additional material sources but it feels 70s gritty that way
6 people found this helpful

J. OvertonReviewed in the United States on July 22, 2021
5.0 out of 5 stars
Kinda love the difference in the Director's Cut, but miss Theatrical Cut things.
Verified purchase
This is a movie I have loved for years. I didn't realize I was watching the DC until the first scene that was different. I thought I was just mis-remembering the movie, then saw what I was watching.

As others have said, I love the restoration of scenes that were cut, but miss those that are NOT in this cut. I feel like, as much as possible, we need an ultimate cut with all the theatrical cut stuff, plus that which was cut out of the DC.

It's not meant to be a comfortable movie, but, I do miss the 'reunion' scene at the end that is 100% missing from the Director's Cut.

I think showing Shane's 'descent' of the DC followed by the 'redemption' of the end of the TC, could actually be pretty powerful.

If time weren't a factor.

Darin McDanielReviewed in the United States on January 6, 2022
5.0 out of 5 stars
Fantastic
Verified purchase
This review is for the Blu-Ray + Digital Director's Cut. I saw the theatrical version of 54 and this Director's Cut brings a whole new, entertaining perspective to the movie. I love that the deleted scenes are included in the movie and not as extras in the special features, hence a true stand alone movie from the theatrical version. You can definitely see when the added scenes appear in the movie as they were taken from VHS dailies and not shot in high resolution. When you watch the "Making of..." in special features you will find out it was just short of a miracle that the deleted scenes existed at all and what a brilliant job was done editing to achieve continuity as there were no time stamps on the VHS dailies. This is the 54 that all participants in the film wanted seen, and I am truly grateful that Director Mark Christopher was so diligent for 16 years to make it happen. Treat yourself and buy this movie, you will not be disappointed.

Jonathan BlackReviewed in the United States on January 6, 2019
5.0 out of 5 stars
LOVE...LOVE...LOVE
Verified purchase
I loved the movie 54 and was there opening night in theaters. I own it and have seen it so many times and never get sick of it.
I've been waiting so long to get ahold of the directors cut because as a film buff and someone who loves Michael Christofer I knew this cut would truly be the movie he originally wrote and wanted to make...and it is!
Watching this cut is like watching a completely different movie. I can't even begin to say all the things I'd like to because it'd be pages of my review.
This is an amazing cut. After watching this I still do love the original movie. But seeing these two DVDs on my shelf I know if I want to watch 54 I'll have to choose which story I want to see before popping in the disc. Awesome!
One person found this helpful
See all reviews
Back to top
Get to Know Us
Make Money with Us
Amazon Payment Products
Let Us Help You
EnglishChoose a language for shopping. United StatesChoose a country/region for shopping.
© 1996-2022, Amazon.com, Inc. or its affiliates