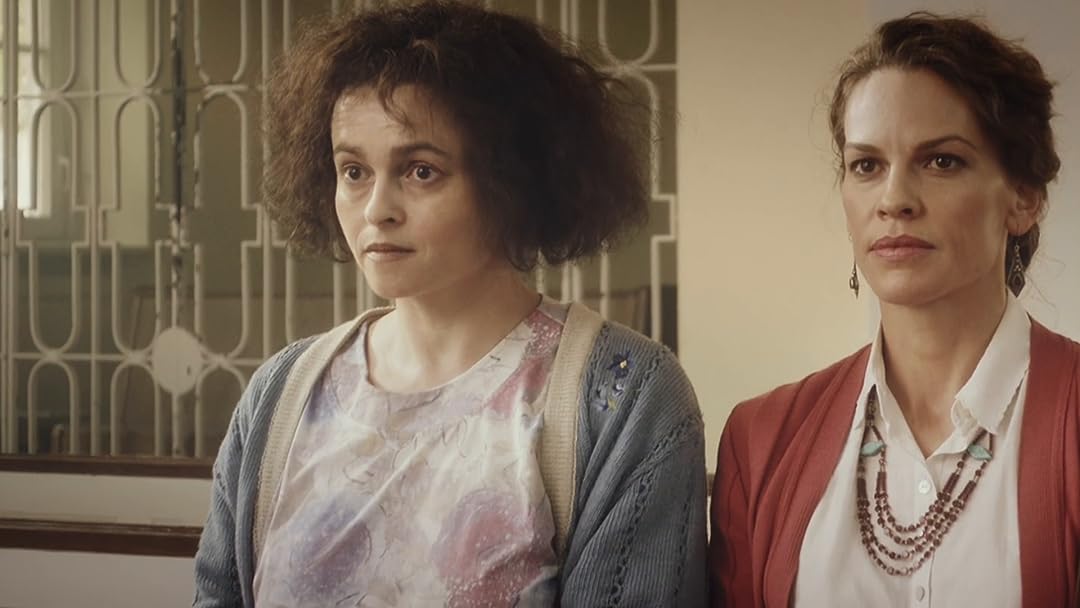 (244)
7.01 h 54 min2018PG-13
55 STEPS is based on the inspiring true story of an outrageous and smart Eleanor Riese (Helena Bonham Carter), a patient in a psychiatric hospital where she's been mistreated, and her attorney, a patients' rights lawyer, Colette Hughes (Hilary Swank).

JReviewed in the United States on October 20, 2018
4.0 out of 5 stars
True to life
Verified purchase
I appreciate this film for depicting the realities of how psychiatric medications and other treatments are forced onto people without their full consent. People in emotional distress still have the ability and the human right to make decisions about their care, and I'm glad this film is helping show that point of view. This movie is not perfect, it has some generic tropes (like "hero who works so much that and it damages a romantic relationship" or "smarmy lawyer on the opposing side speaks condescendingly to hero"), but I would still recommend this film. I hope it reaches a wider audience because the situations depicted in this movie are still happening in psych wards.
18 people found this helpful

Lisa C. NelsonReviewed in the United States on January 14, 2019
4.0 out of 5 stars
Amazing and touching without being preachy
Verified purchase
I loved the moving reality of this. It showed the difficulty of mental illness. And it wasn't anti-medication. So ignore the Scientology reviews. This movie focused on the issue of consent. You can have a mental illness yet still have the mental capacity to make your own health decisions. People do it all the time. I happened upon this movie, but found myself riveted and moved by it, both by the performances, the story, and the legal precedent it set. It also opened my eyes a bit wider to the plight of the mentally ill who seek evidence based treatment then get stuck in a detrimental mental health care loop.
14 people found this helpful

WendyReviewed in the United States on November 30, 2018
5.0 out of 5 stars
Don't miss this movie. You will be a changed person when it's over.
Verified purchase
It was suggested to me that I watch this film because I know some of the folks that made it possible. Upon reading the synopsis I was unsure I wanted to but was prompted to by my conscious to.
What a movie! I thought/was haunted by the whole production for weeks, in a wonderful way.
Helena Bonham-Carter was made for this part as was Hilary Swank.
Thank You to everyone who made this film possible especially Mark Rosin and Cynthia Hoppenfeld.
I was touched for weeks. Few movies move me to this extent.
DON'T MISS IT and when you watch it, do so with an open heart.

Amazon CustomerReviewed in the United States on December 28, 2018
5.0 out of 5 stars
Would Have Been Fantastic In The Movie Theater!
Verified purchase
I happened across Helena Bonham Carter's interview about standing up to Harvey Weinstein, and she mentioned her latest movie, "55 Steps". I decided to rent it because of her passionate story of how connected she felt to this work even though no one in Hollywood purchased it for mainstream box office distribution. I wish I had the articulation of an actual movie critic, but with the avid, movie-watcher expression I do possess, I give this movie a standing ovation! Bravo and well done, Helena! I was pulled into every crevice of this cinema story. I felt every bit of it. It was profound and worth a second watch. I'm still thinking about it. I recommend it to those who enjoy a heart-gripping movie. Grab your popcorn and a Kleenex. You won't regret the 2 hours you spend soaking in the life of a brave soul who made a world of difference.
10 people found this helpful

crcbluv1Reviewed in the United States on December 31, 2018
5.0 out of 5 stars
Amazing
Verified purchase
Wow, movies just aren't made like this anymore. Building characters to the point you can feel their situation is a lost trait in movies. I laughed, cried, and wanted to go fight against these shackles put on defenseless people. I don't think you can ask for in a movie; to feel your emotions on your sleeve and feel a part of the story. Hillary Swank is amazing! Her and Helena Carter have a great chemistry. Loved this! Watch it; you won't be disappointed!
9 people found this helpful

ctab1968Reviewed in the United States on November 27, 2018
5.0 out of 5 stars
Inspiring and heartwarming
Verified purchase
I had never heard of this movie until I was reading an article about Hilary Swank. I had only seen a couple of her movies and, if you are a Harry Potter fan, who doesn’t like Bellatrix LeStrange? I had only ever seen Helena Bonham Carter in Harry Potter movies and Ocean’s 8. Her performance in this movie was fantastic! If you are a fan of these two actresses and movies based on real life events, I highly recommend this movie!
9 people found this helpful

ErinReviewed in the United States on December 15, 2018
5.0 out of 5 stars
Tragic story with an important message.
Verified purchase
The psychiatric industry is not a source of "help". Unfortunately, many looking for help meet their demise by seeking psychiatrists/institutes, and doctors for psychological/emotional help. Medications can never treat someone's emotions, they are toxic, and have serious life threatening side-effects.
10 people found this helpful

Rodger K.Reviewed in the United States on November 11, 2021
1.0 out of 5 stars
Disc is NOT NTSC
Verified purchase
Either this disc is not NTSC as stated above, or there was a problem in the manufacturing. I ordered a replacement when the first one I received would not work on any player in my home. The replacement did the exact same thing. I really wanted this film, which was already available in European PAL format, which is of no use to me in the states, so when I saw this edition was advertised as Region 1, I was very excited. Amazon needs to look into the problem. Either they screwed up the listing information, or as I already stated, a manufacturing issue. They have not yet changed it, so there is no point in trying to order it again. IMO, everyone who received a disc that wouldn't play after buying through this listing should be sent a replacement WORKING copy, free of charge for the aggravation. Can someone please just release a true Region 1, NTSC disc that works already? Jeez.
One person found this helpful
See all reviews
Back to top
Get to Know Us
Make Money with Us
Amazon Payment Products
Let Us Help You
EnglishChoose a language for shopping. United StatesChoose a country/region for shopping.
© 1996-2022, Amazon.com, Inc. or its affiliates