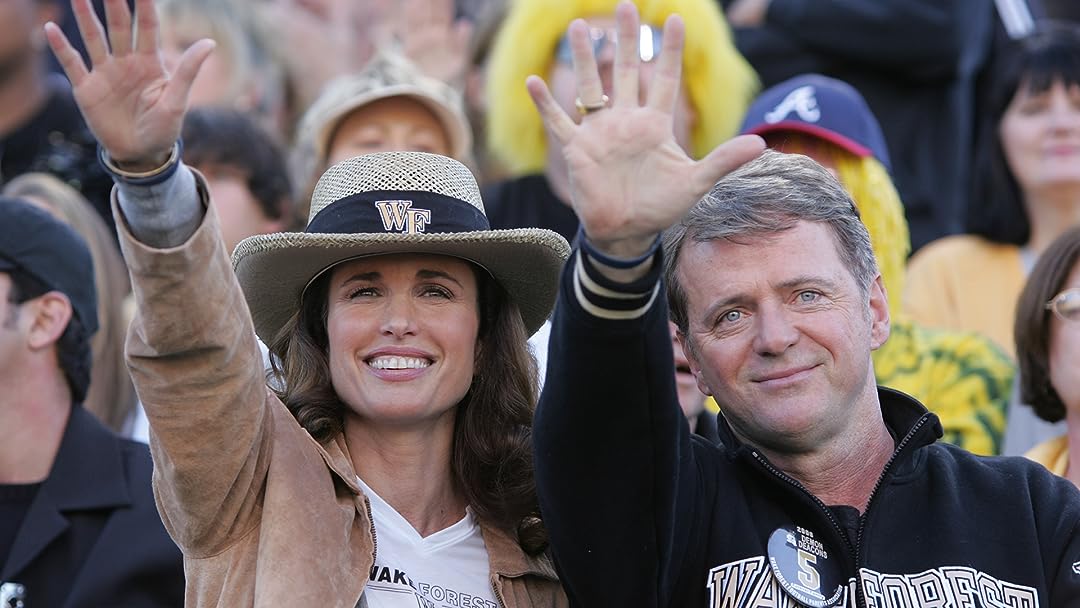 (524)
1 h 37 min2011X-Ray7+
Driven by the tragic and fatal car crash that took the life of his fifteen year old brother Luke, and wearing Luke's number 5 jersey, Jon Abbate helps to lead the Wake Forest Demon Deacons to the most successful season in school history.

B T ReaderReviewed in the United States on April 12, 2020
1.0 out of 5 stars
utterly disappointed
Verified purchase
I constantly search for inspirational stories and movies, I run an organization that serves people going through serious hardship, challenges or loss, and I look for things I can recommend to others. I have long admired both Aiden Quinn and Andie McDowell, however their acting in this film had me wondering where the real people were and who was assuming their identities? Way over the top emotionally, especially the first part, they seemed torn between emotional tears and temper tantrums. The two boys' reactions to their brother's injuries and response to the woman offering organ donation services was ridiculous. The introduction to the older brother was disgusting, and the younger brother was invisible until after the accident. It felt like one very dysfunctional family that was trying desperately to be something they were not. I have to wonder how the real-life people feel about the way they were portrayed? The beginning had a reference to Wake Forest in SC, it is in NC, and at some distance from Atlanta, several hours to drive. I don't often give up on a movie but I had to on this one, and for the sake of the actors who are really very talented performers I tried, I really tried to find something I liked. The boy who died was nice... that's about it.
5 people found this helpful

Corrine PReviewed in the United States on June 5, 2020
2.0 out of 5 stars
disappointing
Verified purchase
The best thing about the movie was showing the struggle and life-saving benefits of organ transplant. I was moved by the RN nurse who had the difficult job of speaking to the family and couldn't help but think of the actual nurses whose responsibility it is to do these things.

But the rest of the movie has much to be desired. I was annoyed that with the driver of the accident we are never shown the consequences of his behavior and the other friends in the car? What happened to them? Surely the studio could have found the information out about what happened. I like the older brother and did feel his struggle was real, as well as his parents. The death of a child is the worse thing parents can go through so the way it was handled, I think, was good. The older brother struggled with his loss and with the support of his team, coaches, friends and family, he was able to get through it all.

What I disliked most, however, is how Rachel was left out. This is based on a true story. Rachel has Cerebral Palsy. It would have been nice to see the studio hire someone with the actual disability, especially since they didn't give her any time in the movie. Initially I thought maybe she was an aunt or housekeeper only to learn from the coach, "how is your sister." It took some digging for me to find who she is and her story is. It's interesting that she her and Adam are twins, she always has had a close relationship with Jon & her brother Luke. Jon said he is inspired by her own example with the struggles she faces. It felt the movie was about the parents, Jon and the football time; Adam was given some time but not much. Rachel is portrayed as detached and unemotional other than a few smiles and cheers as well as when she calls her brother saying she misses him.

But cred is given to the family and anyone who supports Organ Donations. Those were the best scenes in the whole film.

Dee TeacherReviewed in the United States on June 30, 2020
1.0 out of 5 stars
Weak plot and weak characters
Verified purchase
The story the movie was based on sounded interesting, but I was disappointed with the weak and slow-moving plot. It took an hour to get to the main storyline. The audience got the idea that the family was distraught over the death of their son after the first 15 minutes of the film. The dialogue was cheesy and poorly written. None of the characters were well developed, I didn't get to know any of the characters enough to even like them. They tried to infuse the family's faith in the story, but it seemed forced and unnatural. The movie should be remade by someone else with more talent, then maybe it would be worth watching.
2 people found this helpful

GraceReviewed in the United States on February 26, 2020
5.0 out of 5 stars
Inspiring true story
Verified purchase
This film does an excellent job of portraying how the unexpected death of a young teen affects his family, friends, and community. Have the tissues handy. Wish they had done a better job of including a sister and another brother into the story. Watch through the ending, when they share actual statistics of the Wake Forest football team in 2006. Also how the family moved forward to help others through a group they formed to educate about the organ donor program and the dangers of reckless driving.

Kat MillsReviewed in the United States on October 20, 2018
4.0 out of 5 stars
Gut-wrenching indeed
Verified purchase
A powerful story of loss. Sobbed my way through most of it. I was waiting for something a little more uplifting. It was amazing the way the team rallied around John. But I didn't feel we got to see healing in the other family members. And there were some other loose ends, too. What happened to the other kids in the car? What does Adam, the other brother, choose to do? And what about the sister, Rachel? We know almost nothing about her.
If you're looking for a serious tear-jerker, this will do the trick. Any parent could not help to feel the emotions of the tragic loss.

James WallaceReviewed in the United States on September 3, 2019
5.0 out of 5 stars
Inspiring.
Verified purchase
I had never heard this story. I chose to watch because I love football, and I assumed it was a faith based movie. I think the irony of why I FELT this movie was in the details. Loss is ugly. Loss may cause us to say and do "mean" things (Mrs. Abbate's response to her neighbor about the grass). We don't have all the answers in loss. We give up on dreams. Relationship dynamics change. We question God.
What makes this such a good movie to me is that it shows the power of love for others, and how that can have a ripple effect throughout communities. We can inspire others in their time of loss, and be carried by others in ours.
One person found this helpful

Byford I. Hall Jr.Reviewed in the United States on September 11, 2014
5.0 out of 5 stars
TRIUMPH!
Verified purchase
This is a true story of tragedy, grief, faith and inspiration. It is a story of a college football player and his family and how they pull together to overcome an overwhelming tragedy. If you are fortunate enough to see this be sure to watch through the credits where you will see photos of the real people of whom this story was written. Then go to the extras for about a six minute series of interviews that also include the family members. This is a truly great story that will leave you with a warm feeling when it is over.
3 people found this helpful
See all reviews
Back to top
Get to Know Us
Make Money with Us
Amazon Payment Products
Let Us Help You
EnglishChoose a language for shopping. United StatesChoose a country/region for shopping.
© 1996-2022, Amazon.com, Inc. or its affiliates