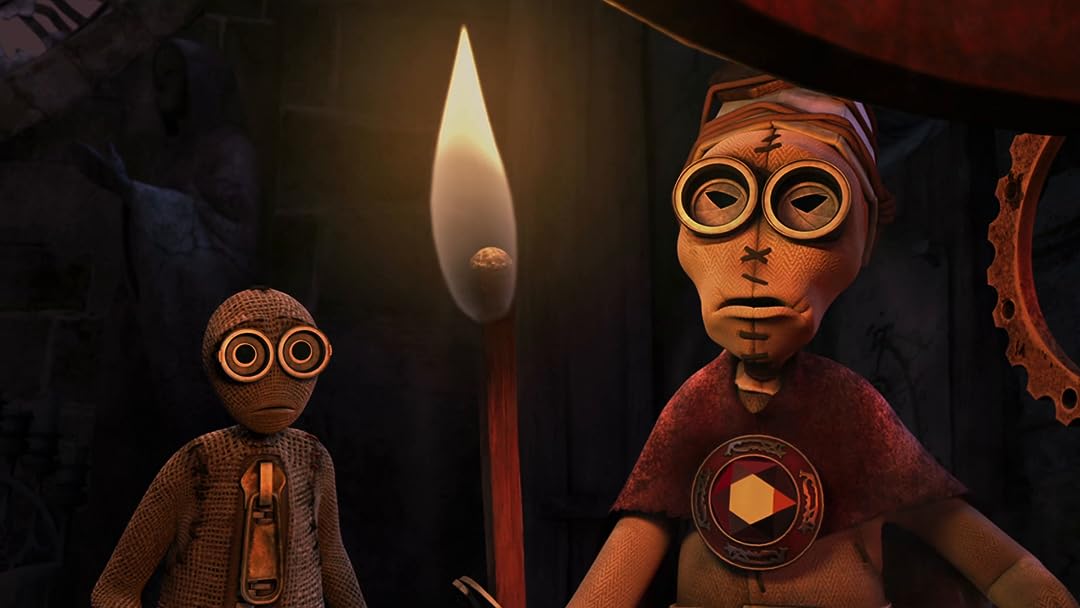 (2,760)7.11 h 20 min2009X-RayPG-13
From filmmakers Tim Burton and Timur Bekmambetov comes this stunning epic about nine creations that find that if they band together, they might be able to change the course of history.

joel wingReviewed in the United States on December 26, 2020
4.0 out of 5 stars
Great postapocalytpic story that mixes action adventure innocence & warning about war
Verified purchase
9 is an animated post-apocalyptic film where humans have all died out and only animated dolls and machines have survived. The story revolves around 9 dolls that hold the secret to the future but are being hunted by an evil mechanical beast.

The movie creates some great images. For instance it shows giant war machines that ended up wiping out the human race that created them. The beast the dolls are fighting is truly menacing. By doing so it warns of the dangers of the unbridled use of technology and the evils of war. A mix of World War I with H.G. Wells looked like the inspiration.

The main draw is the sense of adventure and action. It also imbues the dolls with a sense of innocence despite the destroyed world they live in and the threat of the machines that they are facing.

sixthreezyReviewed in the United States on May 20, 2019
4.0 out of 5 stars
9 - A Movie w/ a Lot of Soul
Verified purchase
What this movie lacks in color and dialogue, it more than makes up with great characters who you get to learn all about in 1-9. They live in a post-apocalyptic world, left behind by their creator to surpass the human race if something were to happen. Here we are, and Elijah Wood is voicing #9 who we follow throughout the story. I really love how the dots connect throughout the film and then the big reveal when he finds the doctor. This movie is fairly frightening and with the lack of bright environments it can be more dreary than anything. However, at the core of this film is a great soul about purpose and overcoming your fears. I typically don't feel too much more than average about Tim Burton animations, even though this is just a production. Highly recommended for fans of darker movies, and I would still consider this a kid's movie even though it's decently scary so if your family likes Tim Burton-esque movies this is a great one. It's held up since its video release quite well, and the Blu-ray does enhance some of the visuals from my previous DVD copy.

Blu-ray copy came in great condition from a used seller, slipcover was included with a little wear around the barcode opening.
3 people found this helpful

Read2live_luv2readReviewed in the United States on July 19, 2013
4.0 out of 5 stars
Interesting
Verified purchase
I ordered this movie because a friend of my son's had recommended it. Even the mom said it was a worthy film. I watched it for the first time with my son. I found the story a bit jarring and political at times. The idea of death is very forward in presentation throughout the cartoon. My son, who is not yet twelve, was eager to assure me that the sad parts were over quickly. It was quite a role reversal for him to reassure me rather than the opposite.
The film tells the story of nine creatures- or creations if you will. I don't want to spoil the story, but it is a kind of apocalyptic tale in which there are no humans, only creations who are left to deal with the aftermath of what scientists and war have wrought on the world. There are thematic elements that are very adult running parallel to the action within the story. There is a sense of preservation, a thread of foreboding and an all-out sense of hope in the tale that you cannot help but root for these tiny creatures to succeed. They are battling not only their own fear, but the thing that was created, much as they were, in the name of science that wants to destroy them. And it is up to a brave few to take on the monumental task of preserving the last of humanity.
I would recommend this film to anyone with the caveat that some scenes may be too scary for small, immature children.
5 people found this helpful

C. BennettReviewed in the United States on August 3, 2021
1.0 out of 5 stars
Beautiful, look, intriguing puppet characters, but a story that doesn't hold up
Verified purchase
All sorts of possibilities are raised in this film that get shoved aside for the sake of the same old run-from-the-monsters action and hanging-by-a-thread escapes, on and on. A lovingly created production that really has nothing much to say, leaving you feeling like none of it really mattered.
One person found this helpful

🌞DShawn🌛🧘🏿‍♂️Reviewed in the United States on January 25, 2018
5.0 out of 5 stars
Good movie
Verified purchase
I love Tim Burton films and this film captured my eyes in so many ways. Some people don't understand the story, but this is the type of movie that you have to rewatch. Soon the story will start to be more understandable
7 people found this helpful

OpusReviewed in the United States on May 26, 2016
5.0 out of 5 stars
A timeless tale told through unique characters.
Verified purchase
I had never heard of this movie but just saw it on a cable channel. I had to buy it. This timeless tale is told through unique characters that you can relate to as well as empathize with. It is so thoughtfully written. The animation is so beautifully put together too. This is not your standard Disney animation or story but I would recommend it for almost any age. It is a bit of a dark story but it's so beautifully told that I think that children would appreciate it and perhaps learn a little moral lesson. I love this film.
3 people found this helpful

D. R.Reviewed in the United States on January 23, 2021
2.0 out of 5 stars
Great visuals. 80% is mindles action
Verified purchase
Movie with allmost no plot and very little meaning.
A lot of chasing and jumping action by scary robots.
The characters do confused stupid things and destroy a mindless spider robot.
Great visuals, but little else.