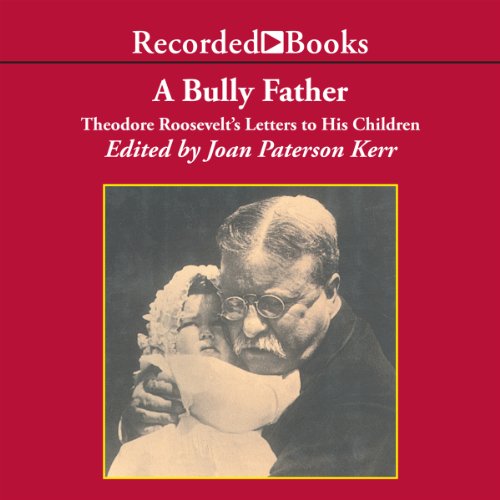 List Price: $25.87
You Save: $2.92 (11%)
By completing your purchase, you agree to Audible’s Conditions Of Use
Sold and delivered by Audible, an Amazon company
Share

4.7 out of 5 stars
4.7 out of 5
8 global ratings
How are ratings calculated?
To calculate the overall star rating and percentage breakdown by star, we don’t use a simple average. Instead, our system considers things like how recent a review is and if the reviewer bought the item on Amazon. It also analyzes reviews to verify trustworthiness.
Top reviews

Maia Curtis
5.0 out of 5 stars Fascinating letters from Teddy Roosevelt to his children
Reviewed in the United States on September 8, 2013
Verified Purchase
This was a charming and interesting collection of letters from Teddy Roosevelt that show him as a doting father. A fascinating read and highly recommended for history buffs.
Read more
One person found this helpful
Helpful
Report abuse

James Gallen
VINE VOICE
5.0 out of 5 stars Delightful!
Reviewed in the United States on May 23, 2003
"A Bully Father" is a delightful insight into a remarkable American family. The first portion of the book is a biographical narrative of Theodore Roosevelt, with a strong emphasis on his family life. The remainder is a collection of letters from TR to his children. Although the letters are identified by topic, they are otherwise left to speak for themselves.
These letters were generally written to his children while they were away at school. The letters are treasures from the Age of Letters. Things which today would be communicated in person, by telephone or e-mail were, in TR's day, communicated and preserved in correspondence. The letters cover a wide variety of topics. Events of daily life of the Roosevelt family and evaluations, favorable and unfavorable, of the child constitute the majority of the letters. Nothing was too small for TR's attention. Horse and carriage rides, playing with children or wrestling with Japanese wrestlers, his tennis partners and White House visitors are all recorded for our enjoyment. TR also used these letters to give vocational advice as well as to comment on public events of the day. TR also expounds on his views on literature and history, as well as his views on family values. The classical literature which he and "Mother" read to the children are mind boggling!
This is a book which is enjoyable to read and also makes you think. TR's relationship with his children and his interactions with them provide a standard against which we can measure our own lives. Read this book and treasure it!
Read more
5 people found this helpful
Helpful
Report abuse

Nelson Schroeder (schroede@teal.sni.net)
5.0 out of 5 stars The Essence of Fatherhood
Reviewed in the United States on June 27, 1998
The greatest legacy a father can leave the world is his children. Theodore Roosevelt is more popularly remembered in history as the great Trust Buster and the hero of San Juan Hill, but his greatest contribution was something that until this book, has been overlooked, the impact of a loving and nurturing father on his children.
Reading this book, one gets the unmistakable impression that Teddy Roosevelt was infinitely more concerned about the lives of his children than he ever was about the affairs of the Presidency. Readers are left with the impression that at a moments notice, he would give up everything for the welfare of even one of his kids. What a legacy to leave for history.
In an age where families are under siege and children are becoming more like trophies that are displayed, Teddy Roosevelt's letters to his children shine as a beacon pointing us to what being a parent is all about, raising, loving, and nurturing our children.
What ever happened to writing letters? The art of letter writing has all but passed away. In T.R.'s time reading letters was a family event, something that was eagerly anticipated by the entire family. Today's family is forced to deal with the constant barrage of faxes, e-mails and cellular phones. Family conversation has been reduced to digital bytes rather than meaningful conversation. George Washington may have been the father of our nation, but Teddy Roosevelt had a far more lasting impact, he was a father to his children.
Read more
9 people found this helpful
Helpful
Report abuse

Art King
5.0 out of 5 stars A shining light across the century
Reviewed in the United States on January 22, 1999
Teddy shines through as a true inspiration to all fathers. I read this book, and then "played bear" with my children.
Read more
5 people found this helpful
Helpful
Report abuse
See all reviews
Back to top
Get to Know Us
Make Money with Us
Amazon Payment Products
Let Us Help You
EnglishChoose a language for shopping. United StatesChoose a country/region for shopping.
© 1996-2021, Amazon.com, Inc. or its affiliates