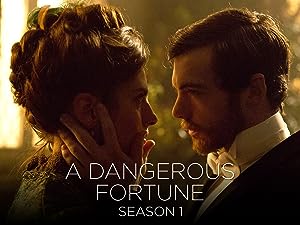 Season 1
(6)
2016TV-MA
A breathtaking saga of love, ambition and intrigue in Victorian London, based on Ken Follett's international bestselling novel.

BloodhoundReviewed in the United States on November 3, 2017
1.0 out of 5 stars
Another Failed Ripoff
Verified purchase
As usual for filmed adaptations of Ken Follett books, this German production is a hot mess that bears little resemblance to the novel. The filmmakers scrapped Follett's entire prologue--which crucially set up the rest of the story--without replacing it with anything equivalent; they added and deleted central characters without any rhyme or reason; altered both the physical and personality traits of the main characters; changed the nature of crucial relationships... etc., etc.
As with the adaptation of Follett's "World Without End," all we have here is the names of the major characters, and some of Follett's plot points. But almost everything that made the novel a rich, interesting read is simply gone.
This is a ripoff, not an adaptation.
For shame.

Kindle CustomerReviewed in the United States on October 20, 2017
5.0 out of 5 stars
Beautiful Adaptation
Verified purchase
Well acted, beautifully filmed and quite enjoyable.

TReviewed in the United States on January 11, 2019
2.0 out of 5 stars
Barely resembles the book.
The mini series leaves out so much of the book that it barely resembles it. The entire first scene is cut out! A murder occurs at a boys prep school, this event steers the course of each of these boys lives. They also removed all the other murders. Main key characters are cut out, and characters who were not in the book are added. They also change the personality of some of the main characters which results in a complete mess. It's as though they forgot the title of the novel. It's really too bad because the book is epic and spans a lifetime of these boys to men. The ending was also changed, and is as disappointing as cutting out the first scene. The acting was superb and the choreography (the setting in Victorian London) was well done. I suppose if you had not read the book this would be a good mini-series, but if you have read the book, this will be a great disappointment. I really hope that the BBC will do a mini series and follow the book more closely.
3 people found this helpful

elizabethReviewed in the United States on August 22, 2018
4.0 out of 5 stars
Nothing like the book but good
Enjoyed this. I loved the novel, but plot of this film not Follet's story, so if you can watch it without any expectations, then you can enjoy! I can only think they had to pay royalties for the "premise" as it isn't the same plot at all. Mho would have done a better film if they'd extended the episodes & stuck with the book's plot as it is far and above this!
3 people found this helpful

Belinda KingReviewed in the United States on March 23, 2021
1.0 out of 5 stars
The Londoners Speak German
What? Bad, worse than bad. A scam. Forget watching this.
See all reviews
Back to top
Get to Know Us
Make Money with Us
Amazon Payment Products
Let Us Help You
EnglishChoose a language for shopping. United StatesChoose a country/region for shopping.
© 1996-2022, Amazon.com, Inc. or its affiliates