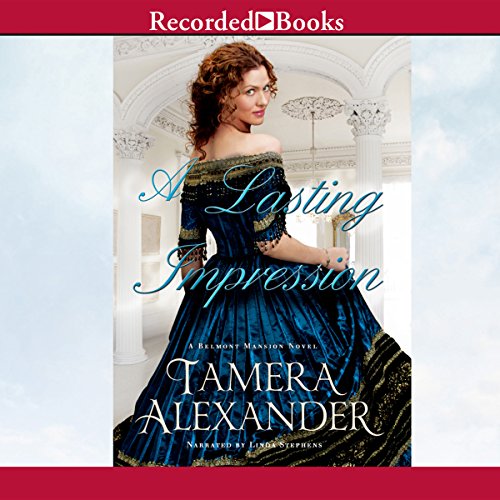 Set in Nashville’s historic Belmont Mansion, A Lasting Impression is an affecting tale of romance between an aspiring artist and a man determined to rise from near ruin.

Your audiobook is waiting!
Learn more about membership
List Price: $34.99
You Save: $5.04 (14%)
By completing your purchase, you agree to Audible’s Conditions Of Use
Sold and delivered by Audible, an Amazon company

Amazon Customer
5.0 out of 5 stars Alexander's Masterful Tale Brought This Weary Author's Passion Back to Life
Reviewed in the United States on March 1, 2017
Though Tamera Alexander's masterful writing style would stand out in any age, it is especially a joy to discover an author of her talent and dedication who weaves a skillful, enchanting, refreshing tale now, when the world of publishing had brought me to a point of despair. As an author myself, it is a daily battle to continue creating novels of lasting merit when the loudest applause seems to go to those catering to humanity's baser instincts with sub-par fare.Here is a standing ovation to Ms. Alexander for crafting a solid, history-based, character-driven, immersive tale that brought this weary author's writing passion back to life. When the heroine in the story hears God ask if she would paint for Him alone, my heart screamed YES! Though it's so hard to remember, we truly do all we do--writing novels included--for an audience of one.This message was even more powerfully brought home when reading the author's comments about making an impression far beyond what we realize. Thank you once more for reminding me it's the deep and lasting impression that makes the real difference in life--and at the risk of sounding melodramatic--in eternity.Bless you, Tamera Alexander, for encouraging a tired, discouraged author to keep on keeping on for the glory and pleasure of God alone. He has filled me with renewed joy and has refreshed my soul by speaking through you.Your new, devoted fan,Chana
Images in this review

Tammy London
5.0 out of 5 stars Hidden Treasures
Reviewed in the United States 🇺🇸 on July 20, 2022
Verified Purchase
The development of each character in this lavish, southern, post-war setting, reveals multiple heroines. Tamera Alexander uses the underpinnings of tragic circumstances to shape and sharpen each one. It is not so much a story of good versus evil, but rather overcoming evil to find good. I loved knowing there actually was a Mrs. Achlen and that Belmont Mansion did exist! Permission to dream? The pearls of wisdom sprinkled throughout added substance to the fairytale-like aspects of the story for me, offering hope that faith in something greater than our own talent (treasure) does not disappoint.
Read more
Helpful
Report abuse

LadyoftheIvy
4.0 out of 5 stars Another good book from Tamera Alexander!
Reviewed in the United States 🇺🇸 on March 25, 2012
Verified Purchase
I especially enjoyed the other books by Tamera Alexander that I've read in the past, so I bought this one without any hesitation. And I have to say, I wasn't disappointed. This is an enjoyable read, even if you haven't read anything by her before. It's well-written with well thought out characters and a good story. It's even more interesting, at least for me, when you realize that it involves a real location and at least one real person. (And yes, I do realize that she was fictionalized a bit in this book.)

I found both Claire and Sutton to be enjoyable characters, and did enjoy the way their romance progressed. Much like many novels involving romance, it's pretty easy to tell they're going to be the two involved in the book early on, so I'm not giving much away there. But despite knowing that, I will say the path their romance took wasn't completely obvious the whole way through - there are a few points where it doesn't do the "expected", though I don't want to give anything away so I won't be much more specific than that.

The story itself also didn't take a path that I was afraid it was going to at one point - I was a bit afraid that the story would focus too much on Claire's past with her father's art gallery and the forging, but that actually was a secondary story, which was nice. (Otherwise, it ran the risk of being pretty typical - girl hides past, boy finds out on his own, boy gets ridiculously mad, girl gets ridiculously defensive, boy and girl act like children rather than discussing. But I should have realized that was unlikely with this author, having read some of her other books.) It really made the story about Belmont, Adelicia Acklen, and Claire and Sutton's involvement with all of the above much more the center. And given that this is listed as a "Belmont Mansion Novel" I see that as a good thing.

The primary reason I didn't give this five stars instead of four is just because there were a few instances where characters weren't really revisited much, or weren't dealt with more. Admittedly, they weren't vital to the main story, but early on an impression was given that they would be a bit more than they were. Eva (one of the servants Claire meets early on) and Mrs. Routh (who is unfortunately a bit underdeveloped, but one of the only characters to come across that way to me) both come to mind. So that's really only a half star loss to me, and it's possible they weren't covered a whole lot because they'll come along again in the future. After all, this is the first book in a trilogy, all involving Belmont Mansion somehow.

Overall, a 4.5 star book, and one I would definitely recommend it to fans of historical fiction, inspirational fiction, Tamera Alexander, or all of the above!

Kelli Nash
5.0 out of 5 stars My favorite Tamera Alexander novel to date.
Reviewed in the United States 🇺🇸 on November 22, 2015
Verified Purchase
Tamera Alexander is quickly becoming a new favorite author for me. I love her books: they are historical Christian fiction with clean, sweet love stories. I can easily lose myself in one of her stories, and each one I read seems to be better than the last.

A Lasting Impression is the first Belmont Mansion novel. The Belmont Mansion series features Adelicia Acklen, one of the wealthiest women in the United States in the 1860s. Tamera Alexander visited Belmont Mansion and knew that she was going to write about the home and its inhabitants. Alexander was able to use some of Adelicia Acklen's correspondence to get a feel for what kind of woman she was, as she was developing her character. Fiction novels based on real people and places are always so interesting to me. I love the feeling that I'm learning about history as I read.

As in her other novels, Alexander's writing style has such a great flow to it in A Lasting Impression. I was drawn in from the very first page, and for such a long book, there really were no slow parts. I like the way Alexander moves the story through time so effortlessly. Oftentimes, skipping weeks feels like a jump ahead, and it makes the story feel choppy. Not so with this novel. The plot moved seamlessly forward at a pace that made it hard for me to put the book down.

Claire made a journey to faith in A Lasting Impression, and that part of the story was especially poignant. Alexander wrote it beautifully, and one conversation in particular between Claire and Adelicia really stayed with me.

Claire is an artist, and the emphasis on art made the story feel even richer. I loved following Claire's creative process, even though she struggled at times. Her struggles made her work more authentic for me. And Adelicia's art collection was staggeringly beautiful---and that's just reading about it, not even seeing it!

The character development was very well-done, with a lot of growth in the characters throughout the course of the novel. I loved that. Alexander's imagery, as well, was outstanding.

I really loved A Lasting Impression. I can't get enough of Tamera Alexander's books! If you are a fan of historical, Christian, or clean romance, I would highly recommend this series!
Read more
11 people found this helpful
Helpful
Report abuse
See all reviews

Mel A
5.0 out of 5 stars Great Read and Love the History
Reviewed in the United Kingdom 🇬🇧 on April 28, 2021
Verified Purchase
Thoroughly enjoyed the story, characters and history of Belmont Mansion! I could visualise all the people, rooms and art from Claire's perspective. I'd never heard of the mansion, but then had to find out more about it after I started the book.
Enjoyed the tension and internal struggles of the characters, and how they worked through them. Loved it!
Read more
Report abuse

Evie
5.0 out of 5 stars Five Stars
Reviewed in the United Kingdom 🇬🇧 on July 28, 2017
Verified Purchase
As with all tamera's books, totally captivated with it.
Read more
Report abuse

Amazon Customer
5.0 out of 5 stars Swept Away
Reviewed in Canada 🇨🇦 on August 26, 2016
Verified Purchase
I LOOOOOVED this book! I felt swept away to another time. When I was forced to actually put it down, I was constantly thinking, "I wonder what they are up to at Belmont..." lol. Written so well. Perfect amount of description, moves along very quickly, incredible character development. The thread of Christianity woven through the story was refreshing. I felt so good about spending those hours filling my mind with positive thoughts and a good story as opposed to other options in the literary world. I have purchased her 2nd Belmont Mansion book and CAN"T WAIT to get started!
Read more
Report abuse

Wilma12
5.0 out of 5 stars Doesn't Dissapoint
Reviewed in Canada 🇨🇦 on July 12, 2012
Verified Purchase
After reading several samples of various books, I chose to read this one, and I'm happy I did. Tamera once again doesn't fail to deliver. This was a great read, and I found myself up far to late reading reading reading. I could barely put the book down. *May contain spoilers* Claire, who is an artist, but got her start as a forger, embarks on a journey to become the woman God wants her to be. After a robbery at her fathers art gallery, she is forced to flee. After some unfortuante circumstances, Claire finds herself in the employee of possibly the richest woman in Nashville, but ever frightened that her past is going to come back to haunt her, leaving her jobless, pennyless and not able to find work again in Nashville. A great read, that will have you laughing, crying and sitting on the edge of your seat. Very descriptive, which brings the setting as well as the characters to life.
Read more
Report abuse