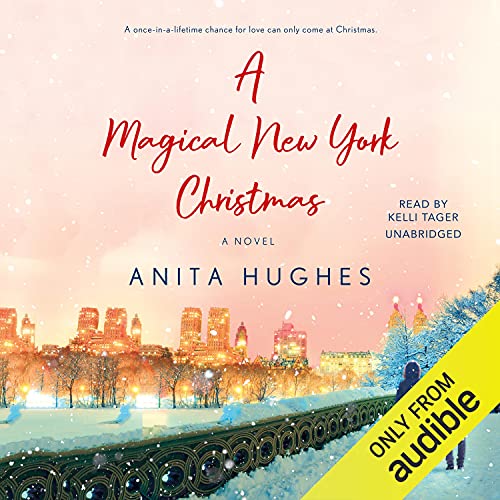 It’s Christmas week when 26-year-old Sabrina Post knocks on the door of the Vanderbilt suite at the Plaza Hotel in New York City, ready to accept the ghostwriting position for the memoir of Grayson Westcott - a famous art dealer.

A struggling journalist, Sabrina can’t believe her luck: a paycheck and six nights in her own suite at the Plaza. She feels like Eloise, the heroine from her favorite children’s books. To make the job even more exciting, Grayson recounts how he worked as a butler at the Plaza 60 years ago for none other than the author of the Eloise books, Kay Thompson.

What promises to be a perfect week is complicated when Sabrina meets Ian Wentworth, a handsome British visitor, at the hotel bar. When Ian assumes Sabrina is another wealthy guest at the hotel, she doesn’t correct him - a decision she doesn’t regret after learning that Ian is a member of the British aristocracy. But, things are not what they seem. The truth is: Ian is not a wealthy lord; he’s actually the personal secretary of Lord Spencer Braxton.

As the week unfolds, will Sabrina and Ian learn the truth about one another?

Filled with the magic that can only be found at the Plaza Hotel during the holidays, and revealing facts about the author of the Eloise books, the novel is both a holiday treat and a heartwarming story that reminds us that falling in love is the greatest miracle of all.

Special invitation from Audible!
Learn more about Membership
List Price: $24.47
You Save: $10.48 (43%)
By completing your purchase, you agree to Audible’s Conditions Of Use
Sold and delivered by Audible, an Amazon company
Share

4.5 out of 5 stars
4.5 out of 5
64 global ratings
How are ratings calculated?
To calculate the overall star rating and percentage breakdown by star, we don’t use a simple average. Instead, our system considers things like how recent a review is and if the reviewer bought the item on Amazon. It also analyzes reviews to verify trustworthiness.
Top reviews

Kindle Customer
5.0 out of 5 stars Magic at its best!
Reviewed in the United States on October 31, 2021
Verified Purchase
What a beautiful story about love and the paths it takes with fascinating characters.
If you believe in love and magical encounters you will love this amazing novel!
Read more
Helpful
Report abuse

Chris R.
5.0 out of 5 stars Perfect Book to read!!!!
Reviewed in the United States on September 29, 2021
Verified Purchase
Absolutely fantastic book! I love all of Anita Hughes books but this one may be the best yet!!!!!
Read more
Helpful
Report abuse

Miss_Kiki
VINE VOICE
5.0 out of 5 stars A magical Christmas tale
Reviewed in the United States on September 28, 2021
Every time I open a book by this writer, I know I will be in for a treat. As always, I completely enjoyed being swept away in this story.

This book is actually two stories in one. The main story is about Sabrina, who was hired as a ghost writer for Grayson, a private art dealer. When Sabrina met Ian, the personal secretary for Lord Braxton, Sabrina assumed he was Lord Braxton, as the room was reserved in his name. Since Sabrina was staying at the Plaza Hotel, Ian assumed she was wealthy. Their misunderstanding could have been disastrous. I enjoyed seeing how they worked through their little white lies. The other story was Grayson’s, as he told it to Sabrina, so she could write his memoir. Grayson spoke of his true love for Veronica and working as a butler for Kay Thompson, the writer or the Eloise books. The story wrapped up with an surprise ending that I never saw coming.

If you read one Christmas book this year, make it this one. The writing, characters, plot and setting make it a memorable story. I can easily see this one made into a movie.
Read more
2 people found this helpful
Helpful
Report abuse

Madison W FairbanksTop Contributor: Fantasy Books
5.0 out of 5 stars A Magical New York Christmas
Reviewed in the United States on September 28, 2021
A Magical New York Christmas by Anita Hughes
Contemporary romance. Clean.
Sabrina is interviewing Grayson to be his memoir ghostwriter. He’s paying for her to stay at the Plaza Hotel in New York between Christmas and the New Year. Sabrina meets Ian in one of the restaurants where they share caviar and a little flirtation.
The story follows Ian and Sabrina in current day and Grayson’s live in the early 1960’s.

Sweet and beautifully organized, the story has the relationships building together even though they take place sixty years apart. An adorable surprise with multiple happy connections.

For anyone that has ever stayed at the Plaza Hotel, and anyone who has wanted to stay, this book includes descriptions of the restaurants, the shops, the decorations and the feeling of being pampered in their high-end suites. The area around the Plaza and other famous and close locations plus holiday activities make it a magical interlude with a romantic slant on the city.

Excerpt:
“The elevator doors opened and Sabrina stepped into the lobby. Every time she saw the Christmas tree—tall and fragrant and decorated with colored ornaments—she wanted to pinch herself to prove she wasn’t dreaming. She really was staying at the Plaza Hotel over Christmas.”
Excerpt from A Magical New York Christmas by Anita Hughes.

I received a copy of this from NetGalley. I will buy a copy as well to share with my New York loving friends.
Read more
One person found this helpful
Helpful
Report abuse

Bookwormish Me
VINE VOICE
4.0 out of 5 stars The Plaza Hotel makes dreams come true
Reviewed in the United States on October 3, 2021
4 stars
Magical indeed! Sabrina is a struggling writer. With a journalism degree in hand, she is trying to make ends meet with writing assignments. She lives in a small apartment in Queens, but has landed a ghostwriting assignment that is taking her to The Plaza Hotel! For several weeks she will live in the lap of luxury while she writes the story of a famous art dealer’s life.

Ian has been friends with Spencer Braxton since they were fourteen, when Ian was a scholarship student and Spencer, the teenage Lord Braxton, attended Harrows together. Ian has been as close as family to the Braxtons. As an adult he has become Spencer’s personal secretary, which comes with perks and downfalls. Spencer is a romantic. Ian spends an inordinate amount of time fending off women that would love nothing more than to be Lady Braxton. The Braxton family jewels are going on display at the Met in New York City. Ian and Spencer have traveled with the jewels to get the gallery showing prepared. They will be staying at The Plaza as well.

When Sabrina finds herself hungry late her first night at The Plaza, she wanders downstairs to find a snack. She comes across Ian sprawled on a couch with food in front of him. When he wakes, he offers to share the luscious feast of caviar and lobster spread with her. A friendship is struck. As the days go on at The Plaza, they continue to find themselves in each other’s company, which they enjoy immensely. But Ian lives in England and Sabrina in Queens. How will this work out?

What a perfect holiday novel about finding unexpected romance at the holidays. The Plaza is the ideal setting for this romp with its strong holiday traditions. Interwoven with the story of Sabrina and Ian is the story that Sabrina is writing for the art dealer. It is such a wonderful parallel of lives and experiences, taking chances and risks while you can.

Anita Hughes has given us yet another story perfect for a cup of eggnog by the fire. I love her holiday stories especially well, as they’re the romantic fantasy we all wish for during this time of year. Pick this one up to read while you’re enjoying a day at the beach or snuggled under a blanket on the couch.
Read more
Helpful
Report abuse
See all reviews
Back to top
Get to Know Us
Make Money with Us
Amazon Payment Products
Let Us Help You
EnglishChoose a language for shopping. United StatesChoose a country/region for shopping.
© 1996-2021, Amazon.com, Inc. or its affiliates