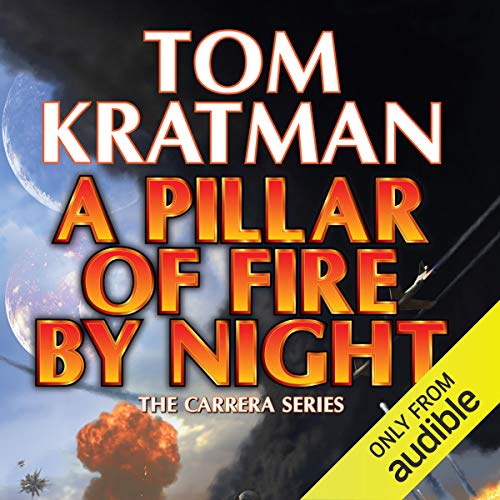 A Pillar of Fire by Night: Carrera, Book 7

4.6 out of 5 stars
4.6 out of 5
242 global ratings
How are ratings calculated?
To calculate the overall star rating and percentage breakdown by star, we don’t use a simple average. Instead, our system considers things like how recent a review is and if the reviewer bought the item on Amazon. It also analyzes reviews to verify trustworthiness.
Top reviews

Mike
4.0 out of 5 stars Not great, but a still a must read for fans
Reviewed in the United States on November 27, 2018
Verified Purchase
Read it in 3 days. Hard to put it down when I had to do other things.

That being said, it probably is the weakest installment in this series. Comparatively, to the other books, little character development and slow advancement of the story line.

The style of this book seemed to be fairly different than other books that really described how Tom would create, organize, build, train and fight and Army from the ground up. This one was somewhat similar to a mystery novel. I found myself trying to guess what Carrera was planning to do to win against such seemingly insurmountable odds.

Disappointed that this book ended where it did. Felt very abrupt, right in the middle of significant events, rather than a logical ending point for most of his previous works in the series.

Still sprinkled with old soldier humor, interesting vignetttes on rarely studied war legalities, and enough of the ‘Balboan’ brand of military efficiency to held my attention and feel like it fit in with the rest of the series.

The time I dedicated to reading this was well worth it. Its just hard to be super happy hitting a double when your last six at bats have been home runs and triples.

Read his last book sitting in a cot, waiting out a 2 day monsoon in the Phillipines until we could get back to working on helo assaults. I hope we don’t have to wait that long to put a cap on one of my all time favorite series.
Read more
12 people found this helpful
Helpful
Report abuse

Robert A. Hall
5.0 out of 5 stars A must for fans of Military Science Fiction
Reviewed in the United States on December 27, 2018
Verified Purchase
Tom Kratman is the leading writer of military science fiction today. I think he has surpassed the late Robert Heinlein, whom I revere and who shaped my thinking from an early age. This is the seventh book in Tom Kratman’s wonderful Carrera series, which started with “A Desert Called Peace.” I’d like to say it’s as good as the others, but it’s not, because Kratman gets better with every book, and this is his best yet. And I thought his first two novels, “Caliphate” and “A State of Disobedience” were terrific. Kratman, a retied Army LtCol, has an incredible grasp of strategy, tactics, logistics (which many fiction writers neglect) and air, land, and sea combat. Better yet, he understands how troops in battle act and talk. His rich characterizations will make you believe these are real people you care about (or loath) by the third chapter. His plotting would make Tolstoy weep with envy. While this novel stands alone, if you haven’t read the others in the series, do yourself a favor and start at the beginning. I received this as a Christmas gift and finished it by the 27th. My major problem with Kratman is that I can read far faster than he can write. Sigh. I understand there is one more coming in the series. At 72 and after a lung transplant, that’s a grand reason to go on living. You won’t go wrong with anything from this master storyteller.
Read more
5 people found this helpful
Helpful
Report abuse

Kindle Customer
5.0 out of 5 stars A book about war by someone who knows war
Reviewed in the United States on November 15, 2018
Verified Purchase
I've been reading every book I can find by the author since I read a Desert Called Peace. As an old soldier much of the action rings true even if the high strategy often seems improbable. I particularly like the lack of PC and I do believe I recognize more than a few of the enlisted, especially the senior NCOs. It's also kind of fun to see the ranks and formation names come form a mix of Roman, and modern Armies and it is really fun to see the Navy have Sgt Majors instead of CPOs. The latest book has some additional appeal with the emphasis on artillery in the last part as I was a Chief of a Battery FDC during Vietnam. The only quibble I have is an artillery fuze is spelled FUZE, not fuse. I'm looking forward to the next book.

Amazon Customer
4.0 out of 5 stars More of the same
Reviewed in the United States on November 7, 2018
Verified Purchase
Still good, lots of detail, but doesn't advance the story much. Probably the last 3 books all cover pretty much the same ground, different perspectives, details, but the same events, only marginally advancing what is actually happening, the last 20% or so was really good and definitely leaves you wanting more. Overall a bit disappointed with the pacing but still plenty of what makes this a great series.
Read more
5 people found this helpful
Helpful
Report abuse

Texican
3.0 out of 5 stars OK at best
Reviewed in the United States on December 1, 2018
Verified Purchase
I have been a fan of this series since the beginning. And I was glad to see that the author finally got around to writing another volume in the series. This one leaves me less than satisfied.

It is a continuation of the novel series that we were left in the middle of a war several years ago. Yet the reader is just supposed to remember all the nuances of both sides of the war with no real introduction. Personally I think it is lazy of an author not to give detailed background in this kind of book.

In addition, his characters seem to lack the depth that I remember from his other works. Maybe it is that Mr. Kratman is trying to cover to much territory, I don't know. Tha action and descriptions of the weapons are good. But as a former Marine and engineer I am about 97% convinced that MOABs idea if pure BS.

I am totaly undecided if I will imvest my hard earned $$$ in the next installment.
Read more
3 people found this helpful
Helpful
Report abuse

Speaking of “series”, if you have not read the previous volumes in the series the is little chance you are going to know what the hell is going on! So read those first.

Re the “Noahs”: if they more info about who and what they are/were does not turn up eventually I will be annoyed. Otherwise they are just a silly way to justify a parallel universe.
Read more
One person found this helpful
Helpful
Report abuse
See all reviews

CYMRO
5.0 out of 5 stars The Long March Continues
Reviewed in the United Kingdom on November 20, 2018
Verified Purchase
After a VERY long wait,the Seventh Instalment has now finally been published. I bought the Kindle version,apparently,the Book version has a Foreword which divulges that there is only going to be one more in this series,which is something of a disappointment as the Plot threads are complex enough to need resolution in a non-cursory manner. However,let us hope that the next book,ignoring the proposed"Wars Of Liberation Of Terra Nova" which it seems is a Compendium of Short Stories,will be with the Readers sooner than this one! I was rather hoping that"Anglia" could have been removed from the "Tauran Union",mirroring"Brexit"[5 years is a long time in Politics]but the faithful Anglians are still there plugging away,alas!However,good to see the Author plugging away-after the debacle of the "Wheel Of Time" series and others like"The Whale Has Landed",and the ongoing delays with "Game Of Thrones",it is a relief when a series DOES continue,so WHEW!!! Stroll on to the next-final,alas-volume,and let it be SOON!
Read more
Report abuse

Ian Hannant
5.0 out of 5 stars Carrera Rides again
Reviewed in the United Kingdom on December 26, 2019
Verified Purchase
A continuation of the Terra Nova series - builds the story further, covering the Tauran Union side of the War. Another good story.
Read more
Report abuse

Avid Reader
5.0 out of 5 stars All seven
Reviewed in the United Kingdom on January 14, 2019
Verified Purchase
I have devowered all seven books in the series so far written ,they are great well thought out.If you have time read them one after another.Hope the next one will follow soon,very soon.I,m hooked.
Read more
Report abuse

Cliente Kindle
4.0 out of 5 stars I love when a plan comes together!!!
Reviewed in Italy on December 5, 2018
Verified Purchase
A new step in the freedom fight when in Balboa a plan comes together and the Legion hits back against the invaders!! The underdogs fight the misguided troops of European Union ... err ... I mean the Taurans and, as in real war, good peple front each others under their own banners, bleeding and suffering ... a great war story, a great political metaphor in what amount to a polemical pamphlet full of action and well written .. look forward the next part!!!
Read more
Report abuse

Scott Osmond
5.0 out of 5 stars Great Addition To The Series
Reviewed in Australia on November 6, 2018
Verified Purchase
Great read. A plan 10 years in the making comes to fruition. How does a small backward nation take on a modern technologically advanced union of nations? As much as a good read this series could be used as a training manual for such a war. Prier planning and preparation, training for war as it is not simply exercises, understanding yourself and the opponent and a will to do what is necessary to win. Action from first to last. Kratman is a author that writes excellent combat sequences. New readers to the series are not advised to start with this one. Happy to find out that the next will be released soon.
Read more
Report abuse
See all reviews
Back to top
Get to Know Us
Make Money with Us
Amazon Payment Products
Let Us Help You
EnglishChoose a language for shopping. United StatesChoose a country/region for shopping.
© 1996-2021, Amazon.com, Inc. or its affiliates