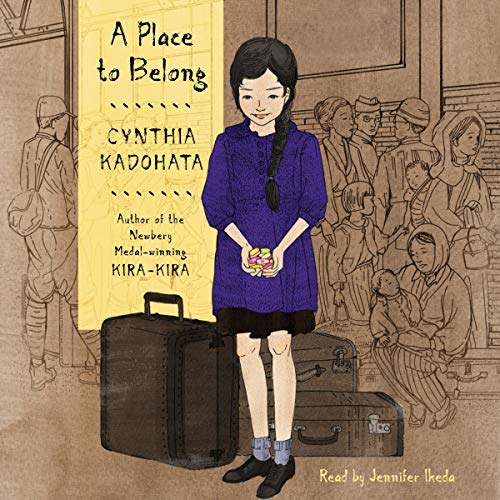 A Place to Belong

“Another gift from Kadohata to her readers.” (Booklist, starred review)

A Japanese American family, reeling from their ill treatment in the Japanese imprisonment camps, gives up their American citizenship to move back to Hiroshima, unaware of the devastation wreaked by the atomic bomb in this piercing and all too relevant look at the aftermath of World War II by Newbery Medalist Cynthia Kadohata.

World War II has ended, but while America has won the war, 12-year-old Hanako feels lost. To her, the world, and her world, seems irrevocably broken. America, the only home she’s ever known, imprisoned and then rejected her and her family - and thousands of other innocent Americans - because of their Japanese heritage, because Japan had bombed Pearl Harbor, Hawaii. Japan, the country they’ve been forced to move to, the country they hope will be the family’s saving grace, where they were supposed to start new and better lives, is in shambles because America dropped bombs of their own - one on Hiroshima unlike any other in history. And Hanako’s grandparents live in a small village just outside the ravaged city. The country is starving, the black markets run rampant, and countless orphans beg for food on the streets, but how can Hanako help them when there is not even enough food for her own brother? Hanako feels she could crack under the pressure, but just because something is broken doesn’t mean it can’t be fixed. Cracks can make room for gold, her grandfather explains when he tells her about the tradition of kintsukuroi - fixing broken objects with gold lacquer, making them stronger and more beautiful than ever. As she struggles to adjust to find her place in a new world, Hanako will find that the gold can come in many forms, and family may be hers.

Your audiobook is waiting!
Learn more about membership
List Price: $17.00
You Save: $2.12 (12%)
By completing your purchase, you agree to Audible’s Conditions Of Use
Sold and delivered by Audible, an Amazon company

H. Johnson
5.0 out of 5 stars Needs to be Read!
Reviewed in the United States 🇺🇸 on July 11, 2020
Verified Purchase
This is such an important book for filling out young people’s understanding of WW II and the treatment of Americans sent to internment camps which resulted in repatriation of many back to Japan with their family members of which many had never been anything other than citizens of the USA. Shocking, educational, and so well written. This is American history left out of the history books but needs to be known.
Read more
Helpful
Report abuse

Ernie Walker
5.0 out of 5 stars Such an important book to read
Reviewed in the United States 🇺🇸 on April 24, 2021
Verified Purchase
My son loved this book. I read it after him and loved it too. I learned a lot about the internment camps in the United States in the 1950s and how American citizens were coerced into giving up their American citizenship.
Read more
Helpful
Report abuse

ShockYourMind99
5.0 out of 5 stars One of my favorite reads ever on Japanese internment/the post-war Japanese experience
Reviewed in the United States 🇺🇸 on April 8, 2020
Verified Purchase
This historical-fiction title has SUCH HEART. I was saddened to leave the characters when the narrative closed, but given that it did so on such a heartfelt, affirming note, I left the title with gratitude for the reading experience. This is a fine book to instruct (or gift!) to readers in the middle grades. Nuanced, layered, and surprisingly complex, it stays with you when it is done.
Read more
One person found this helpful
Helpful
Report abuse

Amazon Customer
5.0 out of 5 stars Couldn’t put it down!
Reviewed in the United States 🇺🇸 on January 30, 2020
Verified Purchase
I couldn’t put this book down! I highly recommend this book for middle school students.
Read more
2 people found this helpful
Helpful
Report abuse

Tonja Drecker
VINE VOICE
5.0 out of 5 stars A tale with hope and heart
Reviewed in the United States 🇺🇸 on June 20, 2019
Hope and love shine as a constant beacon in a tale which leaves the reader sighing and praying that a a girl and her homeland find a way to survive.

Although Hanako and her brother were born in America and are Americans, her parents immigrated from Japan. After the bombing of Pearl Harbor and spending four years in a camp, they're shipping 'back' to Japan. Hanako's life is already a sea without roots as four years before, everything was taken from them—her father's restaurant, their home, their lives. Living in Japan is something she's not sure whether to fear or be hopeful about. While the grandparents she never knew before are as amazing as can be, they reside not too far from Hiroshima. The pain and destruction from the bomb hits in a way Hanako never could have dreamed. Somehow, she hopes to find a new beauty, one described by her grandfather, in the chaos and pain.

The author has taken a very complex and troubled moment in history and presented it in a bitter-sweet and beautiful light with just the right amount of hope for the intended age group. Hanako is a lovely girl. Despite the unfair and terrible treatment her family faces, there isn't a sign of hatred or contempt in her heart. Her entire family maintains a peaceful and hopeful attitude, which outshines the darkness around them. Her reactions and thoughts are understandable and her desire to help is an inspiration. The grandparents add to this with their humor and extremely positive attitude. And it's this brightness which allows the horrible world around them to be presented in just the right way.

This isn't a fast paced read, but rather allows the needed time for everything to sink in. And there is quite a bit for the author to bring across. The four years in the camp are only dabbled in as memories and mentions, while the first chapters allow the reader to settle into the entire situation as well as the characters. This isn't an action book, but glides on emotions and experiences. It digs into the heart and brings the problems to life. Not only young teens will enjoy this one, but older readers are sure to get lost in the pages as well.

I received a complimentary copy and enjoyed the author's beautiful weave very much. So, I'm leaving my honest thoughts.
Read more
One person found this helpful
Helpful
Report abuse

Deb Nance at Readerbuzz
5.0 out of 5 stars Will be one of my favorite reads of the year
Reviewed in the United States 🇺🇸 on September 12, 2019
Hanako and her family---her father, mother, and little brother---are moving to Japan. The war is over, a war which the family spent interred in a detention camp for Japanese Americans. Roosevelt offered the adults an opportunity to revoke their citizenship and to be returned to Japan and Hanako's parents have decided to do this. They are going to stay with Hanako's grandparents on a country farm outside a large city, Hiroshima, a city that was rumored in the camps to have been bombed.

I loved this story of a girl and her family who are trying to find their place in the world, a world that is shifting, changing, where no one feels certain of what home is. It's a story I haven't heard before now, and it's delicately told in that beautiful Japanese way of honing in on a single flower petal and then zooming out suddenly to the big truths of the world.

I'm pretty sure this will be one of my favorite reads of the year.
Read more
One person found this helpful
Helpful
Report abuse

The View
VINE VOICE
5.0 out of 5 stars A Very Moving Novel
Reviewed in the United States 🇺🇸 on June 2, 2020
This is a better novel than many adult novels I read. It tells poignant story and suffers no fools. It is a YA novel but tells an explicit straight story and tells it well. A Japanese family who lost their restaurant, home and pet when they were rounded up by the American military because they were ethnic Japanese. The family spent years in internment camps then at the end of the war, the parents were pressured to renounce their American citizenship and emigrate to Japan. Their relatives lived near Hiroshima so they experienced the bomb. The land they live on is desolate and many people are starving. One thing that bothered me was that the radioactive effects aren't addressed except for the bomb and immediate aftereffects. No one does of cancer or chronic illness. That bothered me. Other than that, I lived the book.
Read more
Helpful
Report abuse
See all reviews

carol mensah
5.0 out of 5 stars Amazing!
Reviewed in the United Kingdom 🇬🇧 on May 20, 2020
Verified Purchase
To be honest,this is the best book I have ever read! And I'm not gonna lie,it made me cry a little.I totally recommend book! One of my favourite books ever!
Read more
Report abuse
See all reviews