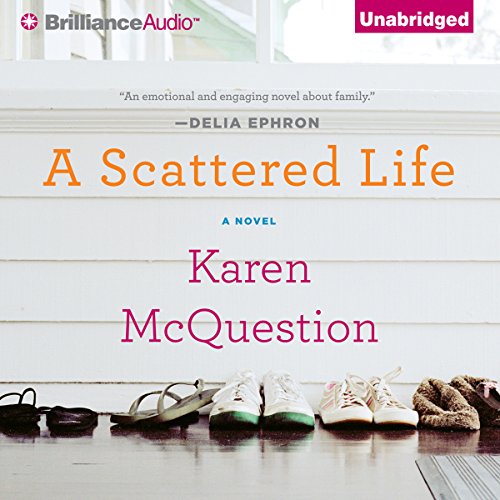 List Price: $13.99
You Save: $2.00 (14%)
By completing your purchase, you agree to Audible’s Conditions Of Use
Sold and delivered by Audible, an Amazon company
Share

4.2 out of 5 stars
4.2 out of 5
1,655 global ratings
How are ratings calculated?
To calculate the overall star rating and percentage breakdown by star, we don’t use a simple average. Instead, our system considers things like how recent a review is and if the reviewer bought the item on Amazon. It also analyzes reviews to verify trustworthiness.
Top reviews

Jennifer Lara
VINE VOICE
4.0 out of 5 stars A sweet story about family, friends and a place to belong
Reviewed in the United States on February 23, 2021
Verified Purchase
A Scattered Life by Karen McQuestion is the story of life, love and finding a sense you truly belong. Skyla Medley is an observer of life. She’s quiet, not shy, as “people are pretty easy to get a handle on if you took the time to watch and listen.” She has lived the nomad life, moving from one place to another, never feeling permanence in any one place. Until one day, she meets Thomas Plinka. When we see Skyla next, she is married with a four-year-old daughter when new neighbors move in. The Bear family is everything the Plinkas are not. Ted and Roxanne have 5 rambunctious boys, ranging 10 year old twins, Wyatt and Emmett, to baby Ferd, while Thomas and Skyla are as straight laced as they come. Something draws Skyla to the loud and outgoing Roxanne and soon the two become good friends. In the meantime, Audrey, Skyla’s meddling mother-in-law, disapproves of everything Thomas and Skyla are doing, especially when it comes to her friendship with Roxanne. When tragedy strikes the two friends, can Roxanne teach Skyla about opening herself up to love? Will Skyla finally find herself truly belonging to a family and a community?
A Scattered Life is a book with so much life in it that it was hard to put down. Every character was real and relatable, with all their flaws, quirks and annoyances. I’ve known people like Skyla who got restless and moved on, not realizing what she wanted was behind her. Thomas, the reliable and sensible guy who seems so set in his ways that it becomes boring. And the lovable Roxanne, whose loud and messy house seems to be from a lack of control and caring, but hides a mother’s love that is more than just a clean and spotless house. I immediately liked Roxanne. At one point in the story, Skyla complements her organization as Roxanne had anything one of her children could have asked for. I loved Roxanne’s response, “it’s not hard, people only make it hard.” It is a lesson in life, love and belonging. It is the lesson that opening yourself up to love can hurt but it is oh, so worth it. It is discovering you are worthy of a family and a place to call home. There were moments of laughter, of anger and of tears. Just like in life, we must go through the bad to see the good. I recommend A Scattered Life.

Kindle Customer
5.0 out of 5 stars Wow!
Reviewed in the United States on September 1, 2021
Verified Purchase
It's sometimes a challenge to write a review of a book. If I can't think of something positive, I pass it by. But A SCATTERED LIFE is an amazing book and that is what makes writing this review so difficult. The characters are so well developed, the events are portrayed with such accuracy to reality, and the settings put you right there in the story.
What makes writing this review challenging is that I don't want to to ruin the story by telling you about. It is a novel to experience without expectations. Karen McQuestion has done a wonderful job; wow!
Read more
One person found this helpful
Helpful
Report abuse

Robin O. Harris
5.0 out of 5 stars A well-Written Thought Provoking Read
Reviewed in the United States on May 15, 2015
Verified Purchase
Karen McQuestion offers readers a really original storyline in this well-written thought provoking novel. The development of her main characters is crucial to her story: Skylar, the young woman whose mother died when she was young and father died when she was only nineteen lived "a scattered life" growing up moving from place to place so quickly that she never developed friends...or roots; Thomas, her ten years older husband, settled, organized, stable; Audrey, Thomas's mother who devoted herself to raising dependable, responsible, settled sons, struggling with a loss of identity with her sons grown and out of the home...well, at least two of them; Roxanne, Skylar and Thomas's new neighbor, a casual, relaxed "earth mother" who takes raising five active boys completely in stride only wishing to add seven more children to the bunch (much to the dismay of her husband) but would be satisfied with only two or three more, if one of them was a girl. Even the minor characters appear carefully crafted to play off the majors characters in significant ways. McQuestion uses a couple of surprising plots twists to bring to story to a successful closure. As explained by, Audrey: "Sometimes lives gives you what you need, not what you want.". This has certainly been true in my own life and, I am sure, also in that of many readers. This book is well worth reading and offers insight into our own lives as well as those around us. Excellent job by Karen McQuestion!
Read more
16 people found this helpful
Helpful
Report abuse

2 Fires
4.0 out of 5 stars I have a New Favorite Author
Reviewed in the United States on June 24, 2021
Verified Purchase
I can't stop reading Karen McQuestion. I stumbled upon the novel, "Dovetail" , and I was hooked. Next, I read, Moonlight Child, and now I finished A Scattered Life. Every book is completely different and awesomely intriguing. The characters unfold and take twists and turns as the plot develops. I need to read another!
Read more
2 people found this helpful
Helpful
Report abuse

JadeBlue
2.0 out of 5 stars Dull characters that really can't change
Reviewed in the United States on May 21, 2015
Verified Purchase
I did not like this book. The characters are self centered and shallow. They never fully develop. But, something has to happen with these people. Then, finally (numerous chapters in) when an upbeat mother enters, she is given the sad ending. From her tragedy, everyone is supposed to learn something and improve. But I did not think the books' characters could change much because they seemed to enjoy being set in their ways. The author is able to write. But I kept thinking that if a few editors had read this and gave her guidance their assistant might have made the book stellar, rather than plodding. This book has been optioned for a film. If the film is made, it will be one of those Hallmark "family learns a lesson" kind of films. The filmmakers will have to do lots of re-writing and character development. The actors, if they are decent, will have to work hard to bring something more than the cardboard sob stories presented here. Clearly, some readers like this book. If you like Midwestern characters who are wound up tight, some who are busy bodies, some who have experienced sad lives that are looking for a husband to save them, then maybe this is your kind of book. There are other books that are much better than this.
Read more
11 people found this helpful
Helpful
Report abuse
See all reviews

Alison Marie
3.0 out of 5 stars A scattering of dispapointment amongst a nice enough story
Reviewed in the United Kingdom on September 27, 2011
Verified Purchase
I came across this book while looking at books within the lower price range on the kindle books section of amazon, I think its good to try out and support upcoming authors as well as the old favourites. I thought the story sounded really intriguing and deep so downloaded it to my kindle.

A scattered life tells the story of Skyla who having spent her life growing up with barely any family and on the move most of the time has found a settled domestic life in Wisconsin with sensible husband Thomas and daughter Nora. When Skyla takes a job at a local book shop she begins to find her independence and remember he old passions for life and begins to question her life and look for more from it.

I have to say that on the whole I was pretty disapointed by this book, it was a nice enough story and I felt like it had the potential to be something special but it just never got there. The story was well observed and well structured but on the whole I was bored by the characters, there wasnt really any insight into their emotions as the story progressed so you didnt really feel like you were sharing a journey or experience with them.

I think I felt like I was getting to know the characters and waiting for the moment when we would get more involved with them but it just never happened.

If you are looking for a nice enough story to entertain you then this book is good enough but its not a story that stayed with me long after I finished the last page.

Check out more of my reviews at: [...]
Read more
Report abuse

Beechnut Fairy
4.0 out of 5 stars Relationships.
Reviewed in the United Kingdom on August 16, 2019
Verified Purchase
Friendships and family relationships in good times and sad times.Good read if you relate to people and you’ve got a tissue handy.
Read more
Report abuse

cherryred
3.0 out of 5 stars Reasonable story
Reviewed in the United Kingdom on May 19, 2013
Verified Purchase
I think I find it hard to be particularly enthusiastic about this book as the main character seems very uncaring and self centred and I have to like a character to be bothered what happens to her. Otherwise the story is an Ok tale of family and friends. The neighbour seems a nice character but you do not really get to know her well. I do not think I would bother with another book from this author.
Read more
Report abuse

Kindle CustomerDiane
5.0 out of 5 stars Again wonderful read
Reviewed in the United Kingdom on September 28, 2016
Verified Purchase
I have enjoyed this book as much as the others, however, it made me cry. Still touching on spirituality but tinged with sadness. Fiction yes but also shows Karen McQ insightful of realism. So glad I read it. Just about to start another of Karen's books lucky me.
Read more
Report abuse

Kindle Customer
4.0 out of 5 stars A Scattered Life
Reviewed in the United Kingdom on June 26, 2014
Verified Purchase
The story was quite sad and I did not expect the twist and turn of the ending. Well written and good story line.
Read more
Report abuse
See all reviews
Back to top
Get to Know Us
Make Money with Us
Amazon Payment Products
Let Us Help You
EnglishChoose a language for shopping. United StatesChoose a country/region for shopping.
© 1996-2021, Amazon.com, Inc. or its affiliates