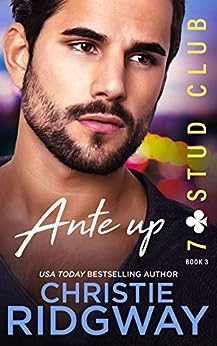 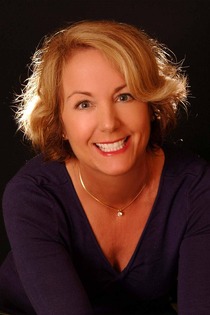 Cooper Daggett enjoys playing the field, until he falls for a woman who doesn’t look at love as just a game…

Winning a designer’s services in a community raffle doesn’t mean beautiful Willow Ray will rearrange Cooper’s life, right? Except then she’s in his home and in his workplace and in his head…can his heart be far behind?

Willow wants a man and a family. Security and commitment. While Cooper has all the sexy charm in the world and was made for a thrilling one-night stand, she questions if there can be more. Because everybody knows you can’t re-make a dedicated bachelor into the forever man you need…unless love steps in with its own plan.

Enjoy the 7-Stud Club! Seven poker night buddies who are very good with their hands…and are about to lose their hearts! Only great risk leads to great reward…

About the Author
USA Today Bestseller Christie Ridgway is the author of over 70 novels of contemporary romance. All her books are both sexy and emotional and tell stories of heroes and heroines who learn to believe in the power of love. Christie is a six-time RITA finalist and has won best contemporary romance of the year and career achievement awards from Romantic Times Book Reviews . A native of California, Christie now resides in the southern part of the state with her family. Inspired by the beaches, mountains, and cities that surround her, she writes tales of sunny days and steamy nights.

4.7 out of 5 stars
4.7 out of 5
54 global ratings
How are ratings calculated?
To calculate the overall star rating and percentage breakdown by star, we don’t use a simple average. Instead, our system considers things like how recent a review is and if the reviewer bought the item on Amazon. It also analyzes reviews to verify trustworthiness.
Top reviews

Tina
5.0 out of 5 stars A fun read
Reviewed in the United States on July 26, 2020
Verified Purchase
Cooper is a lucky person who plans on winning the grand prize of a Jet Ski at a Community Raffle. Instead he wins decorating by Willow. Willow is starting a new business after moving into town.

Cooper comes across as not taking life too seriously and does not do relationships. Willow was in the Foster system and wants nothing more than to be in a loving relationship and eventually have a family of her own.

Pat
5.0 out of 5 stars Very entertaining
Reviewed in the United States on June 13, 2020
Verified Purchase
Handsome educated well rounded business owner Cooper meets Interior Decorator Willow. Chemistry sizzles from the pages, the characters have amazing personalities, and they have some humor. An awesome book that I was glad to have read and I recommend it. I voluntarily reviewed an advance reader copy of this book and gave my honest opinion.
Read more
Helpful
Report abuse

Janet M Cassidy
5.0 out of 5 stars Excellent Bet!
Reviewed in the United States on June 17, 2020
Verified Purchase
An excellent read and best of the series so far. I loved both characters so much and the development of their romance is pitch perfect. A moving and sweet romance but the intimate scenes are still hot. A sure bet buy thi book.
Read more
Helpful
Report abuse

Danielle Renee Glover
5.0 out of 5 stars Ante Up!!
Reviewed in the United States on September 6, 2020
Verified Purchase
Coop, what can I say about Coop!?! He’s one fun and fabulous man. Willow is one lucky woman. There was such attraction from the beginning. Sorry for Brad but this worked out. Love them!!
Read more
Helpful
Report abuse

Kindle Customer
5.0 out of 5 stars Another wonderful book in this series.
Reviewed in the United States on June 12, 2020
Verified Purchase
I love this series and this book continues to deliver the characters and storylines that make it so enjoyable. I would recommend Christie Ridgway books to anyone who likes romance, friends and family..
Read more
Helpful
Report abuse

Kindle Customer
5.0 out of 5 stars Another hit
Reviewed in the United States on July 3, 2020
Verified Purchase
I love Christie's books. They're believable, have strong characters and continuing storylines so you can continue with the characters you enjoyed meeting.
Read more
Helpful
Report abuse

Marcia Karon
5.0 out of 5 stars Wonderful series
Reviewed in the United States on June 15, 2020
Christie Ridgway is one of my favorite Contemporary Romance authors. Her characters are always well developed, down to earth, relatable, real people with "issues". This book is the third in the series about 7 best friends since high school auto shop class, who play poker together every Thursday evening in their small home town of Sawyer Beach.

Cooper Daggett is the guy with all the luck and he expects his raffle ticket will win the grand prize at the charity event- a Jet Ski. When instead he wins free decorating from Willow Ray, he is not fazed, because he is drawn to the pretty girl, little knowing that his luck won him the best prize of his life. Cooper has been a go-getter from a young age, a natural entrepreneur, who loves building businesses until they become a success, then getting bored, selling them and starting again. He doesn't do commitment. His father doesn't approve, so he has issues and has never been interested in relationships, until something about Willow draws him in.

Willow is new in town, following her foster mother, who recently moved to town, trying to build her new decorating business. She had a very difficult childhood, until she landed at the door of Rachel Warren, at the time a young single social worker, who became her foster mother, eventually marrying and raising more foster children and her own. Willow had not made friends easily, except for Brad Faber, her next door neighbor since she was 12 and he 13. They were best friends, then sweethearts and have been engaged for 4 years, while he has been in the Marines. But an illness forced him out of service and since he has been back, he seems to be spending more time with his Marine buddy, Ben Gillespie, than he does Willow. All Willow has ever dreamed about is a having a loving family of her own and she has been patiently waiting for Brad.

Every intuitive reader figures out long before it is revealed exactly what Brad's problem is. When Willow forces the issue with him, she is devastated with his reluctance to move on with their plans and turns to Cooper. Can Cooper take the unsolicited advise of everyone around, and take a risk on love?

I read an ARC as party of the author's "review crew". This is my unbiased and voluntary review.
Read more
Helpful
Report abuse
See all reviews