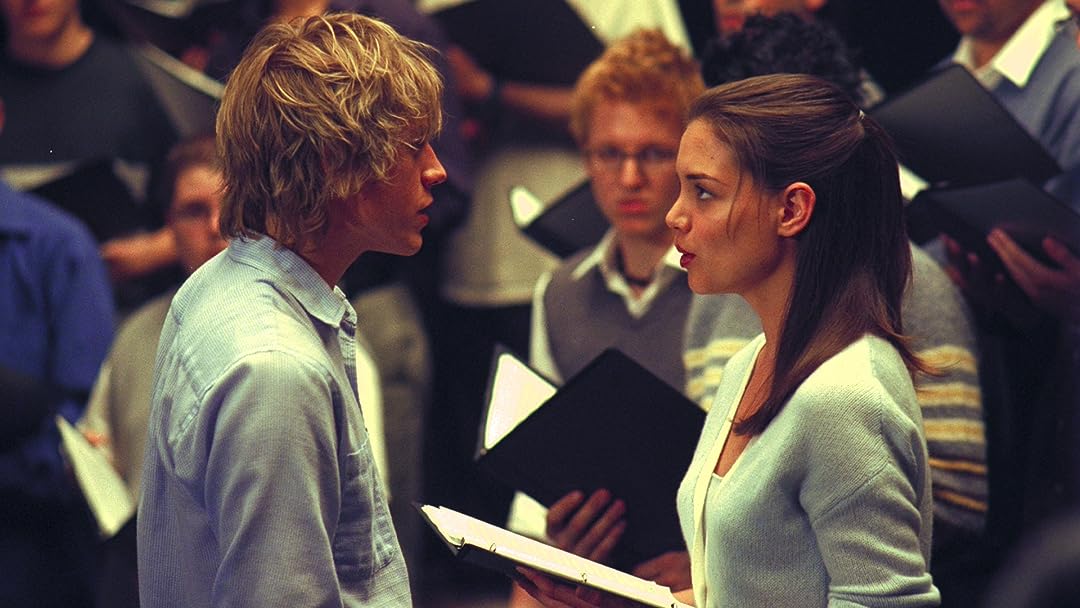 (292)
4.81 h 38 min2002X-RayPG-13
A senior at an elite college, already under severe pressure to complete her thesis and land a prestigious job, must confront the sudden reappearance of her old boyfriend after his two year, unexplained absence.

Butterflymom54Reviewed in the United States on June 23, 2019
3.0 out of 5 stars
A steamy psychological thriller
Verified purchase
I went into this movie with eyes wide opened. I did not read one review. I chose to watch as it was free through Prime video. I like Katie Holms and Benjamin Bratt so on I went. I knew if it got weird I could just turn it off. I did not, I was entranced. As a writer myself, I can respect everything about this movie. No redeeming value here though. Just a thriller with a lot of scenes that were silly and over the top. Someone's overused depiction of college life and far too many recycled clichés! Clearly all the signs were there that the main female character was mentally stressed and emotionally fractured after her boyfriend abandoned her. I thought all along that she knew what happened to the ex and maybe that Benjamin's character played along thinking if he allowed himself to get close to her, he would learn what really happened. He made the wrong choice! He made the right choice in quitting his job. He was not a good cop! These kind of movies depend on the idea of tripping up the viewer and manipulating them to follow along because so many of us are these characters or we know someone like them. One comes away thinking they wasted their time as no satisfaction in the end. However on paper and film, this guy got what he deserved. In reality parents teach your teens to be careful of relationships like these and of the danger of drinking and drugs. Never mind! It's a movie. It's a premise. Watch or don't. I liked it. Not s horror movie, not a love story, not a cop drama. Not sure what we can enjoy from a story like this. Maybe the thill of trying to figure the ending? 1 star for each actor I liked. One for the puzzle. I less star for the nasty content and 1 less for the scary scene where Katie is in bed and someone tries to open her door. This was definitely to me, like Edgar Allen Poe stories.
21 people found this helpful

Robert E. BurkeReviewed in the United States on September 16, 2019
5.0 out of 5 stars
Really well-done entertainment...
Verified purchase
The only way to honestly review something is by accepting it on its own terms not by what the reviewer thinks it *should* be. That said, "Abandon" is a high-gloss thriller, an entertainment that relies on suspense and the ability of its ensemble to pull off performances that seal over any missteps (and there aren't many).
Katie Holmes is someone who was never on my radar until her ex-husband's histrionics during a television interview made it impossible to go through a checkstand without seeing them. Even at that I wasn't sure if in I'd ever seen her - but never mind. She is an exceptionally gifted actress who takes the slightest material and turns it into something to think about (as does the rest of the cast, with some great people like Fred Ward and Tony Goldwyn turning in incredibly nuanced performances in small or cameo parts). Ms. Holmes' ability to make an extremely talented, smart, and disturbed young college student into a character study of a woman literally on the edge is the work of someone who knows her craft. Final thought: "Abandon" is the kind of thriller that is so quietly effective that it isn't until it's over that you realize you've been biting your nails for 90 minutes.
6 people found this helpful

Toni CorreaReviewed in the United States on June 30, 2019
1.0 out of 5 stars
Why
Verified purchase
Why did she see herself at the beginning? I knew she had something to do with Embry's disappearance from the first interrogation but what was her condition. She was just nuts??? And what was the purpose of the scenes with her therapist and him hitting on her? Why did Hamilton disappear and they made it seem like something happened to him but then he suddenly reappears with some lame excuse. Lame ending. Weird pacing. Ben Bratt was high on weed or something. Most of the time I was throwing my hands up in the air while watching.
15 people found this helpful

Michelle RisquetReviewed in the United States on September 24, 2019
3.0 out of 5 stars
I could read her like a book
Verified purchase
Katie's personality traits from the beginning were bizarre. I felt she was "off" right away in the movie. First of all, she's a workaholic in college, yet has friends who she doesn't open up to. She never tells anyone anything about herself which to me is a sign that someone is hiding something. Her personality seemed non-chalant, like a sociopath who doesn't feel empathy or sympathy for anyone. Proven by the fact that she killed the cop. She may have opened up a little at the job interview, yet I felt it to be more anger (hidden) beneath her smugness. She was very rude to the librarian. I knew from the get go she was hallucinating about Embry and her encounters with him. Her deepest fear was rejection, just like her father abandoned her as a child. Daddy issues again!
6 people found this helpful

Dix88Reviewed in the United States on July 21, 2019
5.0 out of 5 stars
Excellent/Eerie
Verified purchase
Katie Holmes looks like a baby in this movie but she is a convincing actor. Benjamin Bratt did a great job as a tortured detective searching for a missing genius (composer, director, artist) who was Katie's character's beau.
Katie is in a high pressure program for her MBA & studies incessantly in the library. She has dreams & weird hallucinations while studying so goes to see a campus therapist. This is a psychological thriller along the lines of Hitchock.
I was absolutely sure that Embry (Charlie Hunnman) had re-appeared, playing mind games with Katie's character.
Held my interest right unto the very shocking end.

Kim WeekleyReviewed in the United States on December 11, 2021
3.0 out of 5 stars
Just okay
Verified purchase
Even though I knew how this would end from the very beginning, I like movies like this. This one wasn't horrible but it wasn't great either. Katie Holmes was a horrible choice for her character. She literally has the exact same facial expressions in every movie/ television show she's in. Watch the movies she's been in and you'll see what I'm talking about. I'm not saying she's a horrible actress but her range is very limited in my opinion. The movie itself was pretty standard for that particular subgenre. Overall, it's worth watching at least once.
One person found this helpful

TDReviewed in the United States on December 29, 2018
1.0 out of 5 stars
what an utter load of crap!!
Verified purchase
watched about 15 minutes and started feeling dumber already.
11 people found this helpful

America is AtlantisReviewed in the United States on November 27, 2018
4.0 out of 5 stars
Cool 90s flick
Verified purchase
Excellent atmosphere Hitchcock esk. Katie is well played here. Plot twist at the end I didn't see coming.
13 people found this helpful
See all reviews
Back to top
Get to Know Us
Make Money with Us
Amazon Payment Products
Let Us Help You
EnglishChoose a language for shopping. United StatesChoose a country/region for shopping.
© 1996-2022, Amazon.com, Inc. or its affiliates