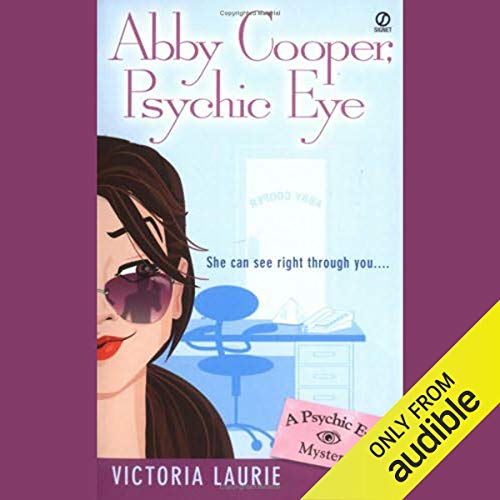 Abby Cooper is a P.I., psychic intuitive. But her insight failed her when she didn't foresee the death of one of her clients - or that the lead investigator for the case is the gorgeous blind date she just met. Now, with the police suspicious of her abilities and a killer on the loose, Abby's future looks more uncertain than ever.

J. Lesley
VINE VOICE
4.0 out of 5 stars What a delightful book this was.
Reviewed in the United States 🇺🇸 on June 13, 2010
Verified Purchase
This delightful book absolutely surprised me by how good it is. Abby Cooper is a psychic intuitive who has come to grips with her talent and is using it as her career. After growing up with parents who didn't understand her ability it has been a relief to Abby to be able to help people find some of the answers they are searching for. I really appreciated the discipline shown by this character in not allowing her clients to rely on her foretelling of their futures to rule their lives. She limits their readings to two each year and ends her sessions by telling them that they are not bound by what she has seen, they still have complete free will and can make any decisions they chose regarding their future. That was extremely refreshing to read, obviously an author with a sense of responsibility. I have since learned that this author, Victoria Laurie, is herself a psychic.

The characters in this novel were very well portrayed and I enjoyed meeting each one of them. They appealed to me as real people would, never single dimensional, but multi layered. They weren't always good or always bad, simply written to act as regular people would act. There is a great deal of humor in this book and it is very natural, not forced or silly. I appreciated that. The romantic interest which is developing between Abby and the police detective, Dutch Rivers, is totally realistic. Once again, this author has allowed these characters to learn a little about each other over a period of time and the relationship is not always smooth and romantic.

There is, however, one glaring mistake in this book which forced me to reduce my rating from 5 stars down to 4. I am a mystery reading fanatic and I've been reading mysteries for many, many years. When an author gives me definite information regarding a crime or a crime scene I keep that information in my mind because it is extremely important. In this case information was given about a death and then later in the book it was completely changed when that death was discussed again. I kept waiting for the author to tell me that someone (or actually many someones) had made a mistake, but that information never came. I can honestly say that I have never read a mystery before where this kind of mistake was present. Someone should have caught this, probably the author, but absolutely the editor or someone on the editorial staff. But then, maybe not. I've read every single review here on Amazon and this mistake hasn't been mentioned once.

I was really impressed by the writing talents of Victoria Laurie. I thoroughly enjoyed all the characters she created and the (for me) unusual gift Abby has. I will not allow that one editorial miscue to keep me from continuing on with finding out where Abby and her "crew" go next.
Read more
9 people found this helpful
Helpful
Report abuse

Kindle Customer
5.0 out of 5 stars A Great Read
Reviewed in the United States 🇺🇸 on August 17, 2022
Verified Purchase
I really enjoyed this book. I loved the main characters. It was well paced and really leaves you wanting more. Highly recommend it!!
Read more
Helpful
Report abuse

mariah_327
2.0 out of 5 stars My First and Last Victoria Laurie Book
Reviewed in the United States 🇺🇸 on March 22, 2009
Verified Purchase
I chose this book because it seemed fun, and I especially liked the supernatural element. However, not far into it, I started to be disappointed, and it was downhill from there.

*** SPOILER ALERT *** Do not continue reading if you do not want to know too many details of the book.

Abby Cooper is a shallow and not very likable character. She is a total airhead, and her first reaction to any situation is anger. She flies off the handle quite frequently, and she treats her "romantic interest", Dutch, so badly I kept hoping he'd move on. He deserves better.

After she has a bad date with another guy, and she is looking to call a cab, she bumps into Dutch. After making sure she has money for the cab, he leaves her to join his friends. She thinks "jerk, jerk, jerk!". She just told the guy she had been on a date with another man, yet she is furious when he doesn't drop everything to give her a ride home.

There are relatively few characters in the book. Very early on, her best friend moved away. It seemed she served her purpose to the plot and was no longer needed. She never made another significant appearance until she was needed again. Very coincidentally, she indirectly saved the day.

At one point when Abby needed to think of four people she knew well, she picked her best friend, her best friend's husband, her sister, and her handyman. The girl seemed to really have no friends or life.

It would have been helpful to build up Abby's character and fill in her history earlier in the book. Although her sister is mentioned fairly early, it is not revealed which one is older or if they have other siblings or where their parents are. These details are not revealed until much later, but not because there is any kind of mystery about it.

In addition to the thin story, there were contradictions, and the timelines were inconsistent. A couple examples are below.

On page 49 Dutch is a middle name, but on 293 it becomes a nickname because he can speak the language.

On page 245 it's 7:00 AM. They eat breakfast and get ready to go. After a short drive, they are greeted with "good afternoon" on page 248. They were not at their destination more than hour, more likely half an hour, but they picked up lunch on the way back (page 254).

There is no mystery to the plot. I had it all figured out (well, except for a few minor details that were revealed later) by page 165. The big mystery was why everyone in the book was so baffled. They went round and round with ideas when the solution was so clear. If that was a way to draw out the suspense, it failed miserably.

In fact, at one point it is revealed how a victim fought for her life, yet later Abby speculates whether this was a form of suicide. Egging the person to kill her since she couldn't do it herself. This was ridiculous given the earlier revelation.

Some may consider these nit-picky details, but if you want a book with a full, rich plot, accurate timelines, consistency, and a fun, likable main character, this is not the book.
Read more
19 people found this helpful
Helpful
Report abuse

Genre Minx Reviews
3.0 out of 5 stars Entertaining...
Reviewed in the United States 🇺🇸 on January 14, 2022
Verified Purchase
This story was entertaining and I liked how the author explained and used the psychic element. There were not too many twists and turns to be had but the mystery had its moments. Overall, this story was a nice way to spend a few hours.
Read more
Helpful
Report abuse

adawnray
5.0 out of 5 stars Abby Cooper Series is the best in its genre!!
Reviewed in the United States 🇺🇸 on October 15, 2016
Verified Purchase
I love all of the Abby Cooper books. I had most of them in paperback but lost all of my books that I wanted to keep so that I could re-read them due to Hurricane Matthew. So I decided to buy them electronically! They are fun, full of wonderful characters, and are so far above all the other psychic/paranormal/romance mystery books. I've tried reading others and the characters and plots are rather deplorable if not boring, or maybe written for teen. Plus so many authors have gone the vampire route. That's fine but it makes it difficult to find books like Abby Cooper. I don't care to read about vampires. I am so glad this author continues with this series and enjoy the way the characters have grown, evolved.
Read more
Helpful
Report abuse
See all reviews

The Good Daughter
4.0 out of 5 stars nice easy read
Reviewed in the United Kingdom 🇬🇧 on December 7, 2011
Verified Purchase
Although this is the first Abby Cooper (I think) it was the second one I read and I really enjoyed this one too - the first I read was Better Read than Dead which made me search out another and I think now that I will look for the rest of the series. The central character is very likeable and despite the frivilous looking covers on theses books the stories are as good as any other light detective stories. If you want a mystery story that isn't full of too much violence and doesn't make you want to put your hands over your eyes you will probably enjoy this
Read more
One person found this helpful
Report abuse

Forest girl
5.0 out of 5 stars fun and easy to read
Reviewed in the United Kingdom 🇬🇧 on July 26, 2014
Verified Purchase
I wanted a detective book that wasn't too heavy but had a good plot without being very complicated and that what I got, quick pace good story line and romance I'd recommend this book, as an easy read try it!
Read more
One person found this helpful
Report abuse

beg
5.0 out of 5 stars great fast read
Reviewed in Germany 🇩🇪 on July 4, 2015
Verified Purchase
Knowing psychics myself, I can tell that the way Abby's work is described has a lot of "real" elements in it. I really enjoyed how the paranormal was woven into the story so easily and it felt like just the right amount of humor (to make it light) and romance (again: lighten it up and for us female readers it seems to be a needed ingredient) for a cozy mystery. Characters are well developed and it is really hard to put the book down...I had to read it within a weekend, couldn't stop. I would recommend this to anyone who likes cozy mysteries with a paranormal touch...
Read more
Report abuse