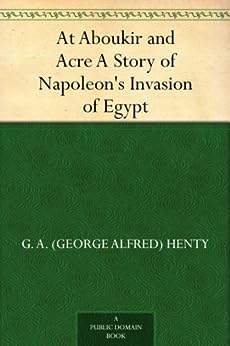 George Alfred Henty (8 December 1832 – 16 November 1902) was a prolific English novelist and war correspondent. He is best known for his historical adventure stories that were popular in the late 19th century. As a war correspondent Henty gained the knowledge and acumen to quickly produce works to capture an audience, to bring them right to the frontlines. This style translated well to his fictional adventures. His almost eighty works in total would soon be read across Britain and North America, and many translated for schools across Europe. --This text refers to an alternate kindle_edition edition.

Amazon Customer
5.0 out of 5 stars Napoleon in Egypt
Reviewed in the United States on August 29, 2018
Verified Purchase
Seems to be written for teenagers but held my interest since it is my first account of Napoleon in Egypt. I will study the history further.
Read more
Helpful
Report abuse

Barton Hannah
5.0 out of 5 stars great for men and boys
Reviewed in the United States on May 2, 2016
Verified Purchase
Battles of the French in Egypt were related throughout the book, great for men and boys. I have never read about Napoleon's invasion of Egypt, so I don't know how accurate this is, but a very good book.
Read more
One person found this helpful
Helpful
Report abuse

Claudia Clough
5.0 out of 5 stars Historically accurate
Reviewed in the United States on July 6, 2013
Verified Purchase
Have enjoyed all the GA Henty books. Great way to teach history passively to kids. My seventeen year old has been reading them since he was 8 years old and still enjoys them. He got a 30 on his ACTs and I give Henty partial credit as they have great vocabulary in them and are so enjoyable to read.
Read more
Helpful
Report abuse

Becky Boehlke
5.0 out of 5 stars Very good: recommended for homeschoolers like me
Reviewed in the United States on January 18, 2013
Verified Purchase
I like the adventure that Mr. Henty adds to his books. It is very refreshing to sit down after school and read one of them.
Read more
2 people found this helpful
Helpful
Report abuse

Zulu Warrior
4.0 out of 5 stars At Aboukir and Acre
Reviewed in the United Kingdom on October 31, 2016
Verified Purchase
Edgar Blagrove 16yrs was English but spoke many languages, at 13yrs he spent time on his education and learnt how to box, Edgar was now back in Alexandria and watching Nelsons fleet, Edgars mother and sisters were leaving for England to settle the girls education, Edgar was to learn his fathers business, some time before this Edgar was returning from a ride when he heard a scuffle in the street, Edgar joined in to help the person who was being attacked and together they drove them off, the boy he helped was Sidi Ben Ouafy the son of a Sheik, the Sheik came to see Edgar at his fathers place and said he should consider himself a brother to Sidi, Edgar lived with the tribe for a while and was given a fine horse, the robbers received 100 blows with a stick

Edgar stayed two weeks at the Oasis, we then see Sidi and Edgar watching the fleet, the French were also due, if they arrived first Edgars father was to leave for England, the French had captured Malta, Nelson sailed to stop them reaching Egypt but failed, the French landed and Edgar could not reach his father so stayed with Sidis tribe, the French took Alexandria, the Sheik with Edgar moved to Cairo, the French occupied Rosetta and sailed the Nile to Damanhour, any Frenchman lagging was killed, the French arrived at Chubreisse and the Marmelukes attacked them but were outfought, the French beat all that opposed them, the English arrived and gave battle to the French fleet, the English won, Cairo revolted, battling in the city with the Sheik and Sisi Edgar is unhorsed, he watches as thousands of Arabs take refuge in a Mosque and all are massacred, Edgar finds the Sheik wounded and carries him away, there is no sign of Sidi

As the story continues Edgar manages to rescue Sidi from the French, Edgar heads for England, on his way he is taken on by an English ship, Napoleon heads for Syria, he can not look after all his prisoners so kills them all, Edgar and the ship he is on sail to help in the defence of Acre, there are desperate hand to hand battles, Edgar is given a post on a gun ship to sail against pirates threatening the area, they capture many ship and cargos, now you must read on to find out how Edgar fares in the battles to follow

My Verdict, not bad, worth a read
Read more
Report abuse

BlackBrigand
5.0 out of 5 stars Terrific swashbuckling adventure.
Reviewed in the United Kingdom on November 22, 2014
Verified Purchase
George A Henty was still standard reading for boys in the 1940s and 1950s and I believe that I probably read the whole of his works whilst I was at school and with few exceptions enjoyed every one. Many of the copies that I purchased with my pocket money are still in my collection but are now quite fragile and so I was pleased to find that most have been re-issued as Kindle editions by various e-book publishers, many are available without cost. I have finally got around to revisiting these novels some of which I have not read for over sixty years. This was one of the latter and I had all but forgotten the storyline.

This tale was first published in 1899. Having saved the life of the son of an Arab chief, the young protagonist is taken into the tribe, has a part in the battle of the Pyramids and the revolt at Cairo. He is an eye-witness of the famous naval battle of Aboukir, and later is in the hardest of the defense of Acre. As usual Henty's battlefield descriptions are generally accurate if a little bit biased but even today give a good account of the action, and are full of the historical details which was the Henty hallmark.

By today's standards Henty's novels are somewhat tame when compared to Cornwell or Gale, but are still pleasant reading if the reader is prepared to put the content in the perspective of being written 130 years ago when the young male demographic had different expectations. If as a reader you are easily offended by Victorian attitudes towards patriotism and other subjects not now considered politically correct then Henty is probably not for you. If however you enjoy a good old fashion adventure with lot of history woven in then these novels are as good today as they were when I first read them at about eleven years of age. Some of the language and grammar may be a bit dated now but should still appeal to the more historically minded 7 - 12 year old or to the adult reader who is perpared to enjoy the experience of another era.

This particular Kindle edition is without frills and generally well formatted, I found only a handful of editing and spelling errors.
Read more
One person found this helpful
Report abuse

Katja L.
3.0 out of 5 stars An Interesting Book
Reviewed in Canada on September 17, 2019
Verified Purchase
3 stars. This is an interesting book, my favourite part being (of course) the naval scenes. One English character makes a statement that his Arabic friend’s god (Allah) is the same God as he has. There’s very few mentions of drinking. I enjoyed the details on the naval life very much.

A Favourite Quote: “My father used to say that being really a good boxer kept a man or a boy out of trouble. A man who knows that he can fight well can afford to be good-tempered and put up with things that another man wouldn't, and if he is driven to use his fists gets off without being knocked about; and besides, as soon as it is known that he can fight, others don't care about quarrelling with him.”
A Favourite Humorous Quote: “‘Sir Sidney said that he would largely leave the matter to my discretion. I would rather that he had given me positive orders in writing on the subject, for it is an awkward thing for a midshipman to have a thing like this left to his discretion, especially as at other times superior officers don't seem to think that midshipmen possess any discretion whatever.’”
Read more
Report abuse

Range Cloyd
5.0 out of 5 stars At Aboukir and Acre
Reviewed in Germany on May 28, 2017
Verified Purchase
A super story well written with accurate historical facts. Can recommend highly. Especially for the younger reader. Still a good read for the older reader as well. Not too much information on Napoleon however but that was not intended I suppose.
Read more
Report abuse
See all reviews