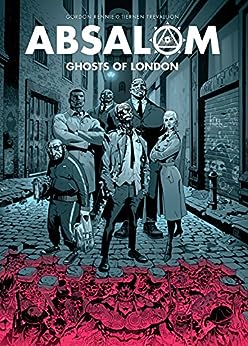 WRITER Gordon Rennie is one of 2000 AD and the Megazine's most prolific creators, with co-creative credits for Caballistics, Inc., Glimmer Rats, Missionary Man, Necronauts, Storming Heaven, Rain Dogs and Witchworld. He has also written Daily Star Dredd strips, Judge Dredd, Harke and Burr, Mean Machine, Past Imperfect, Pulp Sci-Fi, Rogue Trooper, Satanus, Terror Tales, Tharg the Mighty,Vector 13, Absalom and Aquila. ARTIST Tiernen Trevallion has worked as an illustrator since he was convinced to leave school in the mid-eighties. His first comic commissions were for Inferno Magazine on the strip Tales from the Ten-Tailed Cat and Daemonifuge 3 with Simon Spurrier for Warhammer Monthly. He then pestered Tharg, until 2007, where he was given an Al Ewing-scripted Terror Tale, followed by a couple of Tales from the Black Museum stories in the Judge Dredd Magazine. Now currently illustrating Absalom, Tiernen also works on his own projects, some of which involve angry puffins. --This text refers to the paperback edition.

Christopher Long
4.0 out of 5 stars This book was not only brilliant but it's going to end costing me a fortune
Reviewed in the United Kingdom on April 17, 2016
Verified Purchase
This book was not only brilliant but it's going to end costing me a fortune. You see, for a long time, I've been a DC and Marvel guy. I'd long ago turned my back on my Brit comic roots. Until I watched the 2000 AD documentary Future Shock that is. It brought back so many memories of the wild, twisted comics I used to love it. US, mainstream comics had been feeling a little dull while the latest crop of 2000 AD comics looked like the particular cup of tea I was craving. But where to start? Instead of heading back the classics I followed some advice and went for this interesting offering.
Absalom shares its heritage with the likes of Constantine, Hellboy, Mike Carey's Felix Castor and Ben Aaronovitch's Rivers of London series. Grim and ghosts. The stories are fast moving. The humour is dark and the characters are strong. There's a lot to enjoy here and clearly a lot more to come.
It's just a shame that it's shown me I've got a lot of catching up to do. Thanks for nothing, Tharg! I was meant to be saving.
Read more
3 people found this helpful
Report abuse

Tony Dure
5.0 out of 5 stars Spinoff from cabalistics Graphic Novels
Reviewed in the United Kingdom on February 4, 2014
Verified Purchase
A fantastic spin off from cabailistics creepshow, as a team dealing with the compacts with demons, mixtures of bloodlines etc, just don't want to spoil it for you.

A must for those of us who loved Cabalistics inc Graphic Novels, can't wait for the next volume, praying day after day they don't self this series as they did with Cabalistics after volume 2.

Other than that a fantastic read that will keep you hanging on for more, buy it!
Read more
One person found this helpful
Report abuse

Mr. D. FULFORD-BROWN
5.0 out of 5 stars A great read
Reviewed in the United Kingdom on May 10, 2018
Verified Purchase
A great set of characters. Is it just me or does Harry remind people of David Jason in Porridge?
Read more
One person found this helpful
Report abuse

Kindle Customer
5.0 out of 5 stars Five Stars
Reviewed in the United Kingdom on December 18, 2017
Verified Purchase
Fantastic. First came across Harry in Cabalitics.
Read more
Report abuse
See all reviews
Back to top
Get to Know Us
Make Money with Us
Amazon Payment Products
Let Us Help You
EnglishChoose a language for shopping. United StatesChoose a country/region for shopping.
© 1996-2021, Amazon.com, Inc. or its affiliates