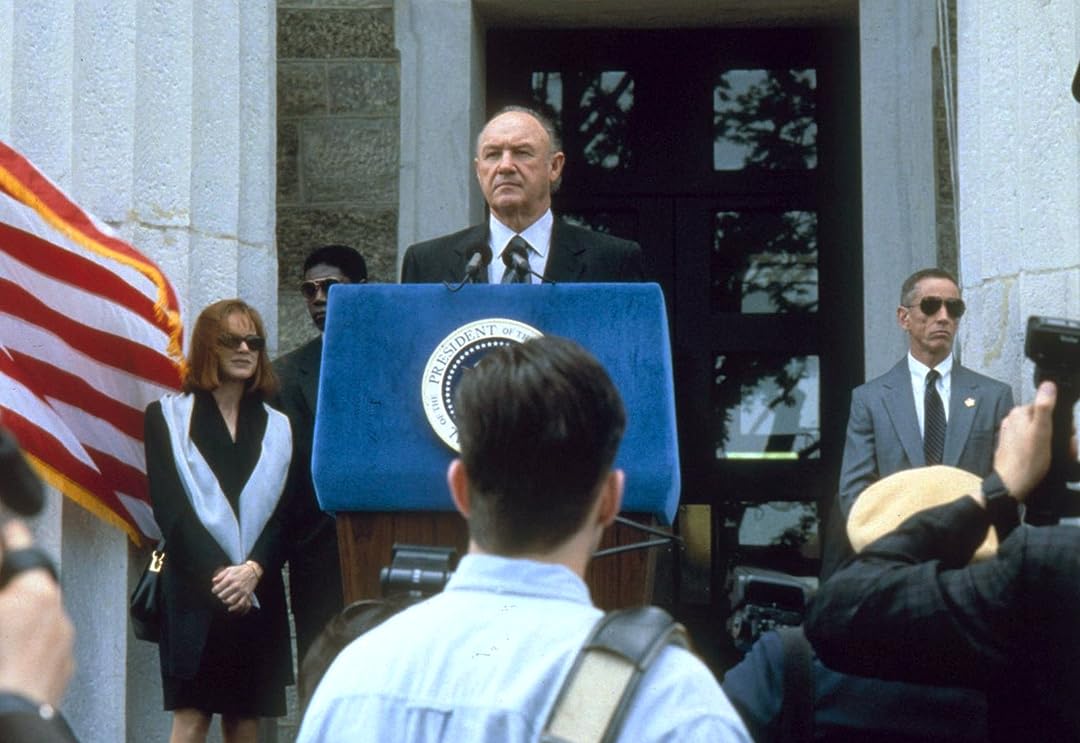 (2,812)6.72 h 1 min1997X-RayR
Eastwood directs and stars as a career criminal who witnesses the murder of the U.S. President's mistress by the Secret Service.

ProfessorReviewed in the United States on September 18, 2019
4.0 out of 5 stars
Totally implausible, but Eastwood is so good!
Verified purchase
This is one of those films in which, after its over, you realize that's it's full of plot holes and improbabilities. But it doesn't matter. Clint Eastwood is so good, both as a director and an actor, that you're just lapping up every scene.

The sub-story about Eastwood and his daughter is really done well. Great performances by Laura Linney, Ed Harris, Gene Hackman, Judy Davis, and an aging E.G. Marshall in his last film.

As a director, Eastwood knows that character development is the basis of a good movie, no matter how implausible the plot. It's so important, and it really keeps us interested. He enlisted the great screenwriter William Goldman to adapt this from the David Baldacci novel, and Goldman knocked it out of the ballpark.

Character development is what's missing from so many of today's superficial movies. Is it just me, or were movies better 22 years ago?!

Susy's Unsought & Unpaid OpinionReviewed in the United States on June 28, 2020
5.0 out of 5 stars
Book so Much Better than Movie (of course and as usual)
Verified purchase
This was an excellent book. I watched the movie long, long ago and re-watched after I listened to the audible book. Even though the movie was good and Clint Eastwood is a great actor (he is one of my fav actors/directors), the book is a better, more in depth story with interesting sub-plots, character development, and of course, it was well written. It would make for a long movie if it followed the book. I recommend reading the book if you liked the movie.
5 people found this helpful
Report abuse

Amazon CustomerReviewed in the United States on August 22, 2019
5.0 out of 5 stars
A great pair Clint Eastwood & Gene Hackman
Verified purchase
Clint Eastwood & Gene Hackman a always a great combination. There are just some actors (Gene Hackman one of them) who has always played a great villain great in that he's so believable. Clint is great great in a part he's never played (a thief). I have always liked this movie very entertaining and I recommend it.
6 people found this helpful
Report abuse

Thomas JonesReviewed in the United States on July 18, 2018
4.0 out of 5 stars
Loved it when it came out
Verified purchase
Loved it when it came out... still do. THe lady that plays his Daughter went on to other excellent roles like her short stint on Frazier as his love...So many of the actor/actresses of Mr Eastwood go on to excellent careers... a testament to his abitlity to pick class actors before they become household names...Thank you Mr. Eastwood for this an all your fine films..(except the one with the pink cadillac, )
10 people found this helpful
Report abuse

Experienced at lifeReviewed in the United States on January 9, 2018
5.0 out of 5 stars
Great cast and story (IMHO)
Verified purchase
Great cast all the way from top to bottom (really liked Ed Harris and Scott Glenn) and it was nice to see E.G. Marshall (just about his last role before his death). Usually Clint Eastwood's movies are too violent for wimpy old me, but this was just a great movie.
12 people found this helpful
Report abuse

Amazon CustomerReviewed in the United States on April 18, 2018
5.0 out of 5 stars
Man of the hour
Verified purchase
One of my all time faves. I noticed at the beginning how there was no dialogue and said someone like Clint could hold an audiences' attention with the suspense of being in a strange house, and robbing it without any bullets flying, screaming, fighting or fast action. And you didn't have to wait long for the conflict. It's great how other actors, as well as, Eastwood have become a national icon and have endeared themselves to us on the big screen for several decades. Usually you might recall a flop from one of your favorite actors cut I don't recall if Clint ever had one. From his humble beginnings in those infamous spaghetti westerns to Dirty Harry and Grand Torino, we've come to see him as a righter of wrongs in a world of apathy and a stand up guy who is there for us when we need them most.
2 people found this helpful
Report abuse

Amazon CustomerReviewed in the United States on September 29, 2017
4.0 out of 5 stars
This could truly happen
Verified purchase
I am a big Clint Eastwood fan. I am a Security Guard and almost 70 years old and work in a high risk environment. This is a great movie depicting corruption and how far government and President will go to cover up a scandal by the President.
11 people found this helpful
Report abuse

Tool GuyReviewed in the United States on July 20, 2020
5.0 out of 5 stars
once again art imitates life
Verified purchase
A great story about how a previous president will do anything to hide his deviant behavior.
After you watch this movie, the tell tale hints just can't hide the truth.
What does Clint know about ??? and when did he know it?
More importantly, the viewer has to ask, who has been blackmailing our politicians for the last decade using the same scandals and why are witnesses usually killed?
Report abuse
See all reviews
Back to top
Get to Know Us
Make Money with Us
Amazon Payment Products
Let Us Help You
EnglishChoose a language for shopping. United StatesChoose a country/region for shopping.
© 1996-2021, Amazon.com, Inc. or its affiliates