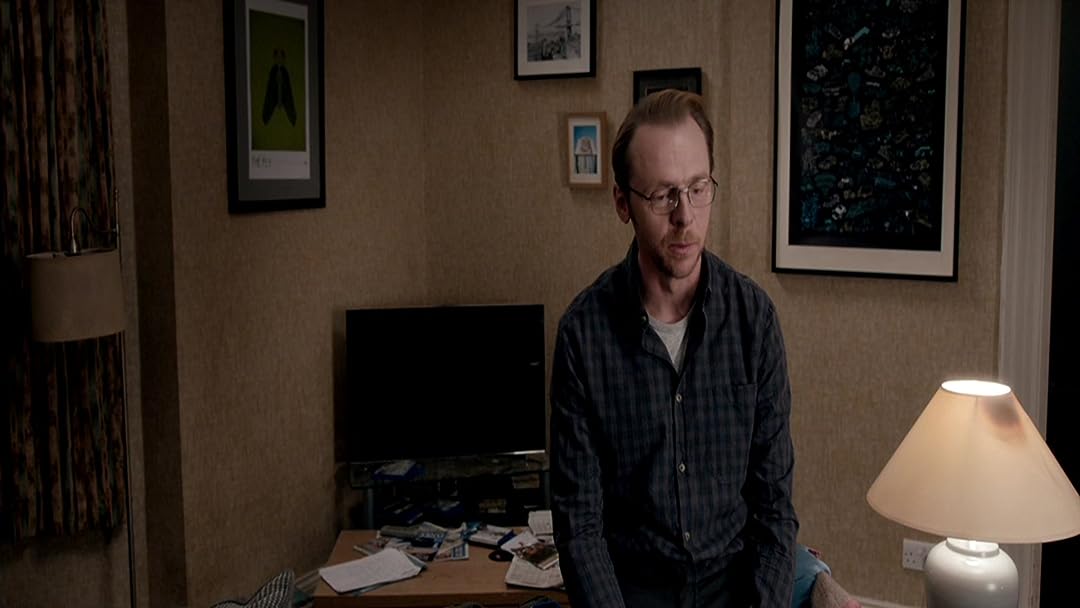 (989)
6.01 h 25 min2017X-RayR
A group of eccentric aliens confers a human being with the power to do absolutely anything, as an experiment.

I M ProbulosReviewed in the United States on October 25, 2019
5.0 out of 5 stars
I love movies that make you think - great for group discussion
Verified purchase
The premise is engaging: what would you do if you could do anything? While the movie is a comedy it is constantly trying to make points about human nature and our desires; also the law of unintended consequences. It is at times laugh-out-loud funny. You do have to suspend judgement at times where you're yelling at the screen telling him what to say or do. Hey, it's their movie; write your own! But that's the point; it could go in a million directions. Enjoy this one.

There are other "God" movies, particularly Bruce Almighty. Similar in scope and style to Bedazzled (except it's the devil and not aliens), also Groundhog day (by the same author as Bedazzled). The purpose of the movie is to make the viewer both think and question what do you really want in life and how would you feel if you got everything? Would you be generous or selfish; good or evil?

What would be the consequences if you ended all disease (too many people!), or climate change? Also if you could make someone love you would that lose all meaning? Great movie for a discussion group!

Spoiler Alert (only read if you want to know plot points)
Obviously he wastes a lot of time doing silly things and doesn't try to do anything important for most of the film. And then when he does it always goes wrong. Also there are numerous times where there are logical contradictions--if you want to look for them. Go with the flow and enjoy it. Not sure about the haters; essentially they are imposing their will on the movie and arguing with the plotlines and characters. Easy to do but if you constantly ask yourself, ok what is the writer wanting to say here, then you'll enjoy it a lot more.

And remember my saying: if you ever ask yourself why the character just did or said what he/she did the answer is obvious! It's in the script!

I M Probulos
BTW I wrote a short novella describing a true Utopian society, where there is no sin, no evil and no death and it is the MOST DIFFICULT thought experiment. Called The Other God's Earth on Amazon Kindle (cost you $.99!)

Ice PlanetReviewed in the United States on September 30, 2019
1.0 out of 5 stars
It is a disaster
Verified purchase
Might be entertaining for 4th grade. Not smart but silly, not clever but dumb. Much better time wasters are out there.
22 people found this helpful

Edward W. DuveyoungReviewed in the United States on June 28, 2017
5.0 out of 5 stars
Pegg fans must see
Verified purchase
6-27-17 Wow are the negative reviews incorrect......enjoyed this one as much as my Pegg favs.....so glad I bought it.....after several bad purchases in a row that Amazon sucker punched me with.

I did not expect to enjoy every joke and be okay with all the exaggerations. I was.

6-29-17 2nd viewing surprisingly nice -- each set piece still held me in "their now," and I seldom wandered into recalling any of the film before I saw it again. That's a validation.

7-5-17 3rd time was charming for sure. The pacing really keeps the attention. Writing is better each time. For instance: "perfect." Nice.

7-15-17 4th viewing was pretty much known in every manner, but I still enjoyed it all -- pacing is brisk. Some flaws and frays showed up, but they were minor. Next viewing whenever, but hope to hold off and forget at least some of the elements....but it's hard wired in me now.....fat chance.

7-24-17 5th viewing nine days later . . . don'tchu be lookin' at me. This film just owns me. It has many elements -- any one of which would attract me to any film. Owned. But though a fanboy of Pegg, I really don't like 30% of his works. Next viewing doubtlessly will be years from now. LAUGHING ARE YOU? See? It's the psychic reach of its humor hegemony.

8-7-17 6th viewing still got me entertained a lot. Not bad. So many viewings in a short time period....yet it delivered.
30 people found this helpful

CC38Reviewed in the United States on November 18, 2020
2.0 out of 5 stars
What is Sex without Consent?
Verified purchase
Neil (Simon Pegg) can make anything happen with the wave of his hand. He thinks (incorrectly) that he got to sleep with Catherine (Kate Beckinsale) because of a hand-wave he did. He later admits to Catherine that he thought he had made her do it. That's like telling a girl you thought you had roofied her drink but there was a mixup so you didn't. It doesn't matter that Neil didn't actually do it, he intended to. It is completely unbelievable to me that Catherine would forgive Neil for this, especially since she knows he actually made one of his female coworkers (literally) worship his friend from work. Neil is shown to be a basically good person otherwise and it's almost as if the writers don't realize that taking away someone's free will is very, very wrong.

Overall I am very disappointed by this flaw in the movie because otherwise I liked a lot about it. I especially liked that Neil didn't turn into some kind of monster just because he became powerful (other than the written-in blind spot). Whenever he accidentally did harm with his new power he would try to reverse it asap. Also, the movie's take on aliens had an almost Lovecraftian slant which was cool.

Apparently this was Robin William's last movie. He voices an obnoxious unfunny talking dog. What a shame this had to be his last.
3 people found this helpful

Scott PaigeReviewed in the United States on November 18, 2019
1.0 out of 5 stars
Abyssmal drek
Verified purchase
This movie was utterly aweful, uninspired, non-entertainment. The movie had an overall "safe" tone to it, as if it were intended to be a family film that just got misfired out of the sphincter of direct-to-home-video studio-hell. It suffers from severe identity crisis; is it a family-friendly film? Then why drop f-bombs and include adult subject matter? Is it geared towards more mature viewers? Then why not have some witty writing, or develop that Kate Beckinsale-Simon Pegg relationship into something that could actually mean something. Is the film science fiction? A romantic comedy? I know what it is, IT'S A MESS! Don't waste your time watching this garbage, seriously folks, you will be happier having accomplished something more worthwhile in your life, like doing the laundry or mowing the lawn.
8 people found this helpful

Ron E. MillisorReviewed in the United States on July 8, 2017
3.0 out of 5 stars
3 1/2 Stars. Not the disaster critics have labeled.
Verified purchase
If you're a fan of Pegg's previous work there is much to recommend this comedy. Not up to the higher standard set by all the talent involved such as Robin Williams, Eddie Izzard, & the Monty Python crew. And that I think is the real reason for some of the poor reviews. But if one wants to spend an evening of entertainment watching this, it is worth it in my book.
20 people found this helpful

Kindle CustomerReviewed in the United States on October 28, 2017
5.0 out of 5 stars
What would you do if you could do absolutely anything?
Verified purchase
I have to honestly say I wasn't sure what to expect, but I've loved most simon pegg movies so had to give a try. It tells the story of your everyday ordinary man who's one day given the power to do...well absolutely anything. Hilarity ensues has he learns that absolute power can sometimes get you into a lot of trouble.

I also have to point out that I think they captured perfectly what would happen in real life if a dog was given the power of speech and reason.
13 people found this helpful

PrimalReviewed in the United States on November 5, 2020
2.0 out of 5 stars
Fan of Simon Pegg movies, but this one is just stupid.
Verified purchase
The premise is that aliens give humans a test to see whether they're worthy of joining them as galactic superior beings or if Earth will be destroyed. They gave one random human (Simon Pegg) the ability to do absolutely anything by simply saying it and then waving his hand. That sounds like possibly a fantastic premise for a great movie -- the problem was the execution.
Simon Pegg is given the power to do "absolutely anything" but does basically nothing with the power. He uses it for a few comedic skits, to help his daily life, to chase after a girl, and to fix problems that arise. That's pretty much it. He hates his job, so he just makes people be nicer and listen to him more. How about you get your dream job or just become independently wealthy, but for some reason he never thinks about that. He's a writer, but it mentions multiple times that he has problem of thinking of a wish. Even though he previously found a solution to that problem, he never uses it again. The character's intelligence and decision making are what mainly ruin this movie. He's given basically infinite power, but it's basically just a "get the girl" movie.
He can become a superior being himself, augmenting his anatomy/mind. Nope. He could restructure the world to become a better place. Nope. Hell, he could be selfish and make his life the best possible. Nope. Let's just do some random ass wishes and desperately go after a girl who you've barely ever talked to.
The wishes sucked, the romance sucked, and the ending sucked. It's basically only enjoyable if you're using it as background noise or can go mindless for an hour or so.
2 people found this helpful
See all reviews
Back to top
Get to Know Us
Make Money with Us
Amazon Payment Products
Let Us Help You
EnglishChoose a language for shopping. United StatesChoose a country/region for shopping.
© 1996-2021, Amazon.com, Inc. or its affiliates