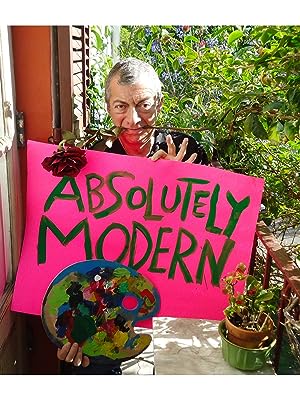 (4)5.21 h 35 min201413+
This smart, well reviewed comedy about muses, Modernism and the role of sexuality in art, is told by famed art critic Lord Steinway. When a football player, 29, confronts Steinway as his long lost son, the story takes on a modernist twist itself. Meanwhile, enjoy the muses.

Amazon CustomerReviewed in the United States on March 28, 2016
5.0 out of 5 stars
SOME LIKE IT ART!!!
Verified purchase
Funny. Smart, Subtly sexy. For anyone interested in art, this is for you.

SydneyReviewed in the United States on April 12, 2014
4.0 out of 5 stars
Absolutely Absurd
Philippe Mora, the Australian-U.S. Producer of incredibly Jewish stories which are based on his own family is now showing his film Absolutely Modern on Amazon Instant Video and we think you should tune in. If Sandy Lieberson of Film London says "Philippe Mora never ceases to surprise, challenge and amuse. He is a one man film industry and satire is his weapon,” then it’s worth the look.

Philippe is best known in the film world for Brother Can You Spare a Dime (which was produced by Sanford Lieberson and David Puttnam and edited by Jeremy Thomas!) It was a great film, a nostalgic look back at the Great Depression with contemporary archival footage and film clips picturing James Cagney as an American Everyman that Dimension might still have for U.S. Other films he is known for — Mad Dog Morgan (1976), Howling III (1987) and Communion(1989) are just a few on a long, long list of films. Check him out on IMDb or IMDbPro now.

Here are some links to this smart, well reviewed comedy about muses, modernism and the role of sexuality in art as told by the famed art critic Lord Steinway when a football player, 29, confronts Steinway as his long lost son,.

Gary NReviewed in the United States on April 12, 2014
5.0 out of 5 stars
Move over Samuel Beckett
Can't think of anyone that has the ability to use his unbridled talent to take us on a journey into his reality. He combines his artists view with his writing and directing skills to create imagery on the screen that is his palette. Thank you indeed Philippe.
2 people found this helpful

S. Lieberson Film LondonReviewed in the United States on April 12, 2014
5.0 out of 5 stars
ABSOUTELY ABSURD!
Philippe Mora never ceases to surprise, challenge and amuse. He is a one man film industry and satire is his weapon.
3 people found this helpful
See all reviews
Back to top
Get to Know Us
Make Money with Us
Amazon Payment Products
Let Us Help You
EnglishChoose a language for shopping. United StatesChoose a country/region for shopping.
© 1996-2021, Amazon.com, Inc. or its affiliates