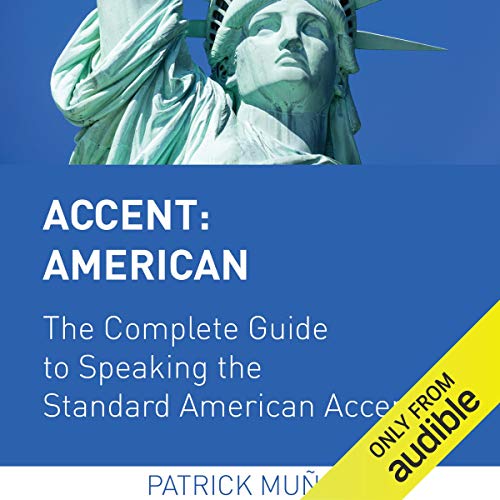 List Price: $6.95
You Save: $0.96 (14%)
By completing your purchase, you agree to Audible’s Conditions Of Use
Sold and delivered by Audible, an Amazon company
Share

3.9 out of 5 stars
3.9 out of 5
24 global ratings
How are ratings calculated?
To calculate the overall star rating and percentage breakdown by star, we don’t use a simple average. Instead, our system considers things like how recent a review is and if the reviewer bought the item on Amazon. It also analyzes reviews to verify trustworthiness.

Kathleen Holland
5.0 out of 5 stars Seek and here you'll find your voice
Reviewed in the United States on May 4, 2016
Verified Purchase
Whether your improving your foreign accent or learning more perfected pronunciation for acting or speaking, this instructor gives you the steps to achieve your goals. In addition the author is a renowned voice coach and voiceover talent in LA. I personally recommend him and this tool for success.
Read more
One person found this helpful
Helpful
Report abuse

Caiuby
5.0 out of 5 stars I liked it very much
Reviewed in the United States on November 20, 2016
Verified Purchase
I liked it very much. This book teach us the English pronunciation and we have to opportunity to practice after listen and repeting the mp3 files
Read more
One person found this helpful
Helpful
Report abuse

Clai
5.0 out of 5 stars Extremely helpful!
Reviewed in the United States on September 2, 2017
Verified Purchase
I've learned a lot from this book.
Read more
One person found this helpful
Helpful
Report abuse

tylersreviews
5.0 out of 5 stars Awesome - 5 stars!
Reviewed in the United States on June 6, 2016
Verified Purchase
Patrick is an amazing instructor and this book is awesome!
Read more
One person found this helpful
Helpful
Report abuse

Amazon Customer
5.0 out of 5 stars This is the book to get for Standard American Accent
Reviewed in the United States on June 7, 2016
I have personally worked with Patrick on stage, as we are both actors. Prior to that I had seen him perform in another play. Therefore when I met him the second time, I distinctly remembered him, not only for his talent, but especially for his voice and his dialect ability. Pure talent and obvious training.

When his book came out, I purchased it immediately because I have a couple of actors (one from Uruguay, and one from Germany) I've worked with for accent reduction. I've also coached other film actors for the stage, where enunciation, projection, pitch, tone, and rhythm are of tremendous importance. So, Patrick's book became a wonderful guide for me and my students, as it's entirely spot on and so well-explained with regard to just about anything one would need to know.

The actors are thrilled with their improvement and I am, as well. I highly recommend it. Bravo, Patrick!
Much congratulations!

Donna
5.0 out of 5 stars A Great Public Speaking Resource Too!
Reviewed in the United States on June 9, 2016
This book should be in everyone's public speaking toolbox. When preparing for an important business meeting for a potentially large client, I thought that it may be helpful to improve upon my presentation skills. That is how I came across this book. At first, I thought that this was a resource for people with a foreign dialect only. However after reviewing its contents and learning about the author, I decided to give it a read. It turns out that even though I did not realize it, I actually did need some help with my "American Accent." I feel that it helped me present with more clarity and that I had additional confidence as I spoke. Overall I think it helped eliminate the strong transmission of some of my "East Coast Accent" and kept the group focus on what I was presenting!
Read more
One person found this helpful
Helpful
Report abuse
See all reviews
Back to top
Get to Know Us
Make Money with Us
Amazon Payment Products
Let Us Help You
EnglishChoose a language for shopping. United StatesChoose a country/region for shopping.
© 1996-2021, Amazon.com, Inc. or its affiliates