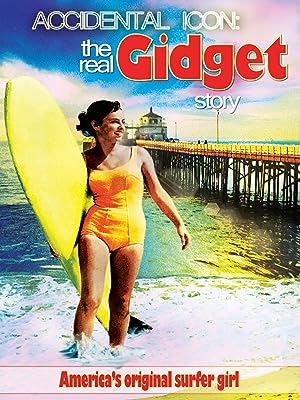 (54)
7.860min2010ALL
The little known story of the woman who inspired the beloved TV and movie character Gidget.

David CrummReviewed in the United States on June 7, 2017
5.0 out of 5 stars
An Enjoyable Look Back at a Surprising Moment of Cultural Change
Verified purchase
I am adding this review from my perspective as a journalist who has devoted four decades to coverage of diversity issues. And I'm writing this in summer 2017 as the new Wonder Woman movie has debuted and touched off a surprising level of inspirational writing about the emergent roles of all the women involved in that comic-book-inspired movie. Sometimes ground-breaking diversity bursts into American culture in unexpected ways.

That's certainly true of the Gidget francise, which included at least four feature films that still are in circulation, plus the very popular Sally Fields TV series (the later TV revival series, at this point, isn't available). It's easy to look back nostalgically at the original novel (updated in a 2001 edition) [[ASIN:B001QTV4OU Gidget]], then to dismiss the whole franchise as cheesy and dated in terms of its attitudes.

And that is the eye-opening value of this documentary in which a range of women surfing professionals talk about the way Gidget broke open conceptual barriers for them—whether they knew there was a "real" Gidget or not. Also, Kathy Kohner-Zuckerman appears throughout this documentary and explains how, as the "real" Gidget, she discovered this idealistic experience on the beach, then translated these surfing stories to her father, author Frederick Kohner. Turns out, the surfer guys were real young men (although Kathy and her father felt free to recast the characters in various ways in the novel). As amazing as it sounds, Kathy was able to make her way as a kind of "little sister" to these guys and was able to break into the somewhat esoteric world of surfing culture.

This documentary really did open my eyes, as a journalist, to this boundary-breaking cultural milestone. Plus, it's just downright fun to see the historical photos from Kathy's life, from the various movie and TV productions—along with commentary on how the whole story evolved. Important history—and just plain enjoyable viewing.

“Ol’ Scooter” Reviewed in the United States on June 19, 2019
5.0 out of 5 stars
A throwback "CLASSIC!"
Verified purchase
A great read (for me anyway. I grew up in a coastal environment and I learned to surf probably about 4 years after the book and subsequent movie were released. The whole "Gidget" thing really took America by storm and resulted in the surfing community in the USA exploding from a hundred guys and maybe a handful of gals…into a true phenomenon, that exploded the surfing scene up to literally thousands of guys & gals grabbing a board and hitting the surf. The surfboard industry literally soared through the roof and the "surf music" of the BeachBoys, Jan & Dean, Dick Dale, The Surfaris, The Ventures, etc blew the record business into orbit, only to be ultimately with the advent of the arrival of The Beatles and The Rolling Stones… The book is a little bit hokey by today's standards but it was pretty true to life for the era of the extreme late '50s and early '60s.
One person found this helpful

Carter HallReviewed in the United States on April 3, 2012
5.0 out of 5 stars
For surfers and non-surfers
Verified purchase
My wife has never been on a surfboard in her life while I have surfed for 47 years. I got this DVD because I am aware of Kathy's environmental work and also interested in the story beyond the movies and tv shows. As a surfer, the movie was engrossing as it featured a who's who of surfers from the early days who all knew "Gidget" and it was interesting to see how this young girl got involved with famous surfers who were instrumental in the sports early days as well as her relationships with those that were on the entertainment side (movies, tv) of the Gidget story. Even more important was the reaction of my wife who enjoyed this equally as much as I did. It's one of those movies that when you realize it's coming to an end wish it would keep on going.
14 people found this helpful

CynthiaReviewed in the United States on December 26, 2013
5.0 out of 5 stars
Great little documentary
Verified purchase
I ordered this because I have always loved the Gidget movies and the TV series. This gave the background info on how it all started. Even though I am almost a contemporary of the real Gidget, I was unaware of lots of the cultural aspects of surfing in its inception, so this filled in a lot of holes in my knowledge.
I gave this 5 stars, not because it is something I will watch many, many times--though I certainly will watch it again--but because it was very fun for me to see and remember times gone by, when growing up in America was a different experience than it is now.
8 people found this helpful

robert p.Reviewed in the United States on May 14, 2016
5.0 out of 5 stars
So good, I got through it in two days - ...
Verified purchase
So good, I got through it in two days - and I'm a 68 year old man! It took me back to the early days of the surfing explosion, when I was just a teen in the early sixties. It was great reading about it from a girl (and that makes it special) who lived through it. This was the story that helped create the Gidget movie, with Sandra Dee and the TV series Gidget, with Sally Field, who was 16 at the time (and made my heart flip!). Definitely a fun and informative read.
One person found this helpful

Debbie AllenReviewed in the United States on October 19, 2015
5.0 out of 5 stars
Worth every penny!
Verified purchase
I've always watched Sally Field's version of Gidget and 3 other of the Gidget movies. I've loved Sandra Dee...and Sally Field so I watch the series and the movies whenever I'm winter blue....They always cheer me up. I own the series of the TV Gidget so I can watch them anytime...also the movies. This explained a lot about the shows & I love learning about the real Gidget!
2 people found this helpful

Gail and Steve BayardReviewed in the United States on February 28, 2014
5.0 out of 5 stars
Excellent it was so nice to finally see the special
Verified purchase
My favorite aactress was Sandra Dee. It was great to see how the real Gidget was so involved with the filming. Sandy is gone now, but it was great to see Jimmy Darren who I love, and have all his recordings. Even from the Donna Reed Show.

Kestutis PauliukonisReviewed in the United States on May 29, 2016
5.0 out of 5 stars
Gidget if real life as a real story….
Verified purchase
This is so cool to see real Gidget in real life as who she was the first Surf Girl as an Icon.
If you like about Surf girl, you would want to see what her real version of the story…. Is a family Entertainment.
One person found this helpful
See all reviews
Back to top
Get to Know Us
Make Money with Us
Amazon Payment Products
Let Us Help You
EnglishChoose a language for shopping. United StatesChoose a country/region for shopping.
© 1996-2022, Amazon.com, Inc. or its affiliates