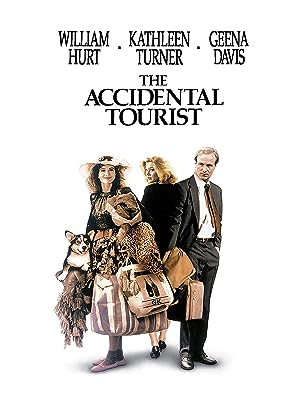 (1,033)
6.72 h 1 min1989PG
A romantic comedy-drama about a reluctant travel writer whose world is turned upside-down when his wife leaves him.

Kevin CarnahanReviewed in the United States on July 28, 2020
4.0 out of 5 stars
Beautiful acting and writing
Verified purchase
Everyone in this film is fine, but bless William Hurt for completely inhabiting this damaged, shut-down character and then making him slowly blossom and grow. This is a delicious performance and should have received more notice. It's unlike anyone else he's ever played. Geena Davis shines in a challenging role--she's warm, decent, and spontaneous; everything the Leary family is not.

But the score should have won a razzie for worst film score. Syrupy, uninventive, safe, soporific, and mercilessly repetitive, this score by the always-overrated John Williams is exactly the last thing this movie needed. Such a shame. The film is worth watching anyway.

CableReviewed in the United States on December 6, 2020
2.0 out of 5 stars
Not as good as I had hoped.
Verified purchase
A good idea executed poorly. Hurt's character is wooden, bland and lifeless. Kathleen Turner leaves then, predictably, comes back later. Her character only exists to create the pull back for Hurt's character. She is devoid of any character, life or interest and Geena Davis' character is rather odd and flat. She immediately starts flirting with Hurt the moment they meet and constantly goes after him. she's supposed to be quirky and loveable but she came across quirky and annoying. Why she just goes after hurt so aggressively is never explained or built up to she's just all in for him and hurt doesn't seem to be all that devastated when his wife, kathleen turner, ups and leaves him because their kid died, I wanted more to dive into from all three characters but it was all surface level and not much explanation given to any of them. When hurt has to go to paris for his work and geena follows him, this is after she and hurt started a relationship and hurt's wife makes her return into his life, it comes across as obsessive and stalkerish more than a play for love. This was a great idea that needed a few more rewrites to give our stars more depth. Not a bad movie but I felt it lacked depth for us to really relate and sink into.
4 people found this helpful

Big MommaReviewed in the United States on August 13, 2020
5.0 out of 5 stars
What a difference a few decades make...
Verified purchase
I remember when I saw this in a movie theater, decades go. This happens, that happens, oh, look what happened there, what do you think will happen? Years pass, and now I appreciate this film as a kind of character study of a man who takes a risk to start again.

Dustin Hoffman swallows his lines - this is so distracting as to make some of his acting unwatchable. He can 'emote,' he can react, he can display nuances of feeling, but that voice that swallows every sentence starts to annoy. He only rises out of that phlegmy register when he has to shout or whisper. William Hurt unfortunately swallows his lines, too. But here, it serves him well to sound, as his wife describes him, 'muffled.' It is part of his character.

Geena Davis' character is his perfect foil with her brash singing and stubborn demands. It's not that her character acts like this with some unique charm - it is that her character acts this way at all. Plowing forward, through the rejection. She holds back and suffers her indignities silently and then regroups. Back into the fray she jumps, no matter whether welcomed or not.

Now, these days, after years of not seeing the film, it is not about what happens. It is all about what these characters contemplate and what they expect, and what they deny. What their feelings lead them to.

That's the difference when watching this film again, older. Oh, yes, and there is that issue of children, too.

Jonathan CohenReviewed in the United States on December 27, 2020
3.0 out of 5 stars
A Well Done Drama
Verified purchase
“The Accidental Tourist” is a 1988 movie directed by Lawrence Kasdan and based on a 1995 book by Anne Tyler.The story is based in Baltimore. A guide book writer, Macon Leary, played by William Hurt, who tells businessmen how to be comfortable in their travels and feeling at home as much as possible, has lost a child, Ethan, when he was about twelve years old, to pointless gun violence a year before. He has been distant from his wife Sarah Leary, played by Kathleen Turner, and this has made her want to live in her own apartment and get a divorce. Macon has a publisher, Julian, played by Bill Pullman and an eccentric sister, Rose Leary, played by Amy Wright.
Macon has a dog who was beloved by his lost child, and who he is devoted to because of this. The dog can bite, so he has a person in charge of a kennel who also works on animal behavior work on the behavior of the dog. This is Muriel Pritchett, played by Geena Davis. Muriel has a son who is fragile and about seven. She has been divorced. Macon does well with her son and a relationship developed. Macon is reluctant to totally commit.
The movie doesn’t drop any themes. The haunted thoughts about Ethan and the progress of the dog. and the strong feelings towards Sarah are not forgotten. There is a lot of eccentricity in the movie especially from Muriel and Rose, but it remains pretty reasonable. The story is good in terms of not being contrived. I would call it a sweet but unsettled story.
5 people found this helpful

ANGELReviewed in the United States on March 13, 2021
4.0 out of 5 stars
Excellent Acting & An Interesting Story-Line
Verified purchase
First of all, the main character is played by John Hurt not Bill Pulman as listed. I've seen this movie several times because it's so well acted. I especially enjoy Geena Davis' acting as well as the character she plays (so honest and a little on the cooky and brash side). Her acting in this is flawless. Whoever did the casting was spot on (in my humble opinion). I've always liked John Hurt too and his acting, as always, is also excellent. I would recommend this to almost anyone.
3 people found this helpful

DocReviewed in the United States on December 20, 2019
3.0 out of 5 stars
Greena Davis saves this predictable film
Verified purchase
Not a horrible movie, just rather boring and predictable. William Hurt’s character is not overly likeable, and his quirky siblings are simply ridiculous, but Geena Davis is charming, cute, and utterly lovable. She truly saves this film, and deserved the Oscar for her role.
5 people found this helpful

Rocko3Reviewed in the United States on April 10, 2021
5.0 out of 5 stars
...prime acting from William Hurt and Geena Davis!!!!
Verified purchase
I used to own this movie. Now I just rent it....
All the actors make you feel right at home.... I love the fact that all of Macon's family are so peculiar....
So what I'm saying is the script is so well written. I have always loved this movie. Give it a watch with a close friend..... you won't regret it.

Cannucklehead Film AddictReviewed in the United States on December 15, 2017
5.0 out of 5 stars
Great drama about ordinary lives and challenges.
Verified purchase
Contains a documentary as well, a brief one, and a whole raft of "lifted" scenes, which all go to show that it is editing which makes the movie. All the best character and dramatic moves in this wonderful film came about as a result of re-editing the film after the director thought he had it locked. And he cut things and reshot, much much more than he added.
5 people found this helpful
See all reviews
Back to top
Get to Know Us
Make Money with Us
Amazon Payment Products
Let Us Help You
EnglishChoose a language for shopping. United StatesChoose a country/region for shopping.
© 1996-2022, Amazon.com, Inc. or its affiliates