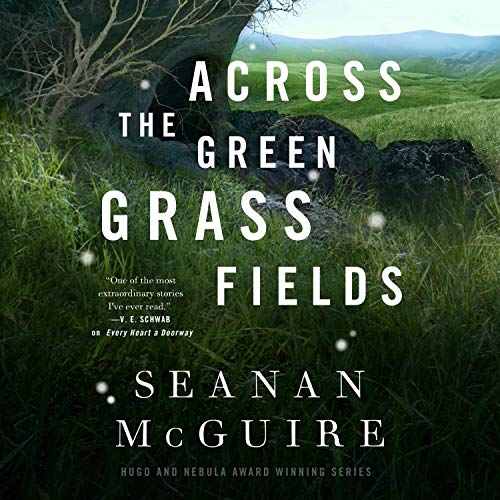 List Price: $10.39
You Save: $1.30 (13%)
By completing your purchase, you agree to Audible’s Conditions Of Use
Sold and delivered by Audible, an Amazon company
Share

4.5 out of 5 stars
4.5 out of 5
777 global ratings
How are ratings calculated?
To calculate the overall star rating and percentage breakdown by star, we don’t use a simple average. Instead, our system considers things like how recent a review is and if the reviewer bought the item on Amazon. It also analyzes reviews to verify trustworthiness.

Dave
2.0 out of 5 stars Books in this series cost way too much for what they are....
Reviewed in the United States on January 17, 2021
Verified Purchase
Don't get me wrong; I love Seanan's writing, characters, and worlds across all her various series. The two stars has nothing to do with the quality of the story.

But the books in this series are WAY too expensive for what they are. Face it, anything under 200 pages is a novella, not a novel. And yet her publisher for this series keeps charging as though they were novels (they're all well under 200 pages; some more so than others). $11 for an electronic book (Kindle), which has no printing costs & no storage costs for inventory is just outright greed on the part of her publisher (Amazon says that the price is set by the publisher, who sells the book). Her other series are, by and large longer than the average Wayward Children stories and better priced vs the size of those stories.

This is the last book of Wayward Children that I buy unless the next book is either less expensive, or longer.
Read more
15 people found this helpful
Helpful
Report abuse

Wayne-daniel Berard
2.0 out of 5 stars Disappointing
Reviewed in the United States on January 18, 2021
Verified Purchase
Note: This review includes a spoiler!

I love the Wayward Chiidren series, but was disappointed in this book. Seanan McGuire sets up the main character, Regan, as just having discovered at 10 or 11 that she is intersex. This discovery is what propels her through the “Be Sure” door. It is is also the last mention of it in the entire book.

I found myself expecting that the new world Regan finds herself in, populated by centaurs, fauns, and other figures who seem to be “combinations” of other creatures, but nonetheless their own unique beings, would offer some insight into Regan’s own situation. But none was even implied. The story moves along in a fairly standard way (Regan as hero meant to defeat evil head of the realm), but what had seemed would be the governing premise of the book — coping with a non-binary identity — just disappears!

The story itself is fun and McGuire is a wonderful wordsmith. But I thought I was going to experience an insightful exposition in fiction of the intersex reality. Instead I got a pleasant enough return to Oz.
Read more
5 people found this helpful
Helpful
Report abuse

Joe Karpierz
4.0 out of 5 stars Solid entry in the Wayward Children series
Reviewed in the United States on February 21, 2021
Verified Purchase
"Across the Green Grass Fields" is the sixth installment in Seanan McGuire's Wayward Children series. "Every Heart a Doorway", the first entry, won the Hugo Award for Best Novella in 2017, and all but one of them have been Hugo finalists since then. Like the other five novellas, "Across the Green Grass Fields" follows the adventures of a child who stumbles through a magical doorway into a land that is not their own, but is a land in which they are accepted. The children are usually different from "normal", and one way or another find themselves in Eleanor West's School for Wayward Children. This latest novella is a standalone within the series. We never do get to the school here, and it's not clear that the setting is the same world as the other novellas, but since the doors appear when they are needed, we can assume it is.

Regan is different, but for the longest time she doesn't know why. All she knows is that she isn't maturing like the other girls. When she gets to be 10 years old, she confronts her parents, asking what is wrong with her. Her parents assure her that there is nothing wrong with her, and in fact she is exactly who she is supposed to be. The difference is that she's intersex. Now that she has an explanation for the situation, on that she can live with, she goes on with her life. She confides in her best friend Laurel of the situation, who turns against Regan when she hears the story. Regan runs away from school, runs away from home - just for a while, of course - and runs through a magical door. She finds herself in the Hooflands, where centaurs herd unicorns (As an aside, the concept of unicorns being herd animals is something I've never heard of. I've never actually thought of unicorns having to be, uh, "cleaned up after", but the image was funny to me.), and there are all sorts of fantastical hooved creatures, as one would expect. Regan is taken in to the band of centaurs and is treated as a family member. She does the work that is expected of her, and she befriends one of the centaur girls, Chicory. And while things get rough for the Centaurs because of Regan - a human - they treat her as one of their own.

But it's that fact of being human that is the crux of the matter. Every time a human appears, something momentous happens. Usually that humans save the residents of the Hooflands from something evil. In this case, it turns out to be the Queen. The Queen wants Regan for herself so that she can keep a close eye on her. Regan doesn't want to go to the Queen until she has to. The confrontation, which takes a turn that the reader doesn't see coming - well, *I* didn't, anyway - is the crux of the story, and the event which eventually sends Regan home, many years after she ran away.

The themes of the novella are the usual ones in the Wayward Children series: children who are shunned by society because they are different from others, the opposing sides of children who are cruel to each other and those who love their friends despite their differences, and children finding their own way no matter who or what they are.

I'm finding more and more that unless a narrator either a) is so good that I'd listen to anything they read - think Jefferson Mays, narrator for the Expanse novels, or b) is so bad I'd never listen to anything read by them again - I haven't come across one yet - as long as the narrator doesn't get in the way, I'm happy. Such is the case with Annamarie Carlson.

"Across the Green Grass Fields" is a solid, serviceable entry in the Wayward Children series. It is by no means my favorite in the series, that place being held by "Down Among the Sticks and Bones", nor is it my least favorite. It has both strong and weak points, as most books do. Fans of the series will like it, and as a standalone it is a nice entry point for readers coming in to the series for the first time.
Read more
2 people found this helpful
Helpful
Report abuse
See all reviews

Harry Payne
5.0 out of 5 stars A lyrical addition to Seanan McGuire's Wayward Children series
Reviewed in the United Kingdom on January 15, 2021
Verified Purchase
A girl who wanted to be normal, and is trying to find out what normal is and how it can be cruel, finds out she can't be. She didn't mean to run away from home, but when she did, she found a family who loved her for what she was, helped her grow, and find the courage to make new friends; not all of whom want to eat her.

I was captivated by both parts of this story, before and after Regan steps through the doorway from our world into the Hooflands. Its ending deconstructs the Hero's Journey efficiently and quickly, and the coda left me wanting to know what happened next. If I'm lucky, I may get to find out.

This small story can be read without any knowledge of the ones that came before it in the series, but I recommend you read them all, eventually, if you haven't already.
Read more
One person found this helpful
Report abuse

Kindle Customer
5.0 out of 5 stars Another book I couldn't stop reading
Reviewed in the United Kingdom on January 16, 2021
Verified Purchase
Not through a wardrobe, but through a door, to a world where evening is different. There are people, but not quite like us. All the rules are different, and it all makes sense. Once again Seanan McGuire has written something I liked a lot, but can't explain why.
Read more
Report abuse

Annette J
4.0 out of 5 stars Wonderful series
Reviewed in the United Kingdom on January 11, 2021
Verified Purchase
The latest book in the wonderful Wayward Children series takes us to a world of unicorns, centaurs and kelpies in the company of Regan, a young girl struggling with feeling comfortable in her own skin. As always I am awed by McGuire's ability to pack so much into such a slim volume.
Read more
Report abuse

MoonBeam95
5.0 out of 5 stars In love with this series.
Reviewed in the United Kingdom on February 15, 2021
Verified Purchase
Yet another excellent addition to the series, each just as good as the enxt and leaves me wanting more. Out of the series I find Nancy to be my favourite, there are so few books with asexual characters especially fantasy stories like this. I'd love to see more of her and also see Kade's story.
Read more
Report abuse

Jennifer Power
5.0 out of 5 stars Awesome read
Reviewed in the United Kingdom on January 29, 2021
Verified Purchase
A fun romp that captures a that horsey phase that every pre-teen to teen girl I knew went through while adding a lot of fantastic elements. This is part of a series although it does stand alone and makes a good jumping on point. It's a sweet read about finding family and what it means to be a hero.

Highly recommend
Read more
Report abuse
See all reviews
Back to top
Get to Know Us
Make Money with Us
Amazon Payment Products
Let Us Help You
EnglishChoose a language for shopping. United StatesChoose a country/region for shopping.
© 1996-2021, Amazon.com, Inc. or its affiliates