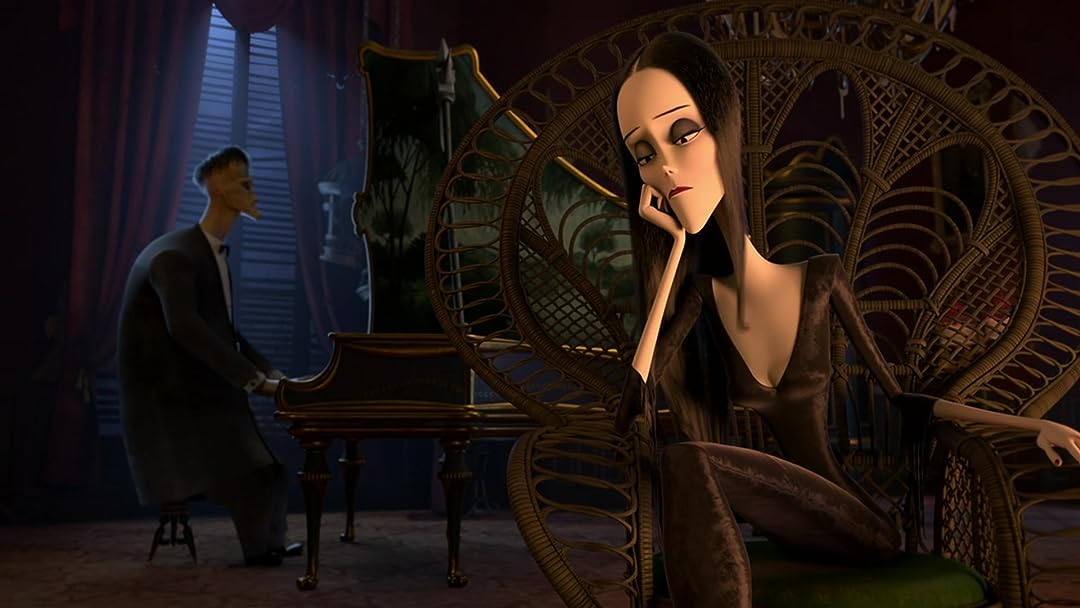 (38,226)
5.81 h 26 min2019X-RayPG
Get ready to snap your fingers! The Addams Family is back on the big screen in the first animated comedy about the kookiest family on the block. Funny, outlandish, and utterly iconic, the Addams Family redefines what it means to be a good neighbor.

Hep72Reviewed in the United States on January 19, 2020
3.0 out of 5 stars
Better than you think
Verified purchase
I was hesitatnt to watch this movie based on the reviews because some people really slammed this movie. and as someone who is an Addams afficionado, as well as a naturally dark and cynical person I was expecting to hate it. I took the risk, and I am glad I did. It's a pretty good movie.
Like many others say, this movie is more true to Charles Addams and his original 1938 New Yorker illustrations. Anyone who knows the original comics will see this. The opening sequence shows Lurch as the Christmas tree, and Wednesday is instructed to "kick her father goodnight". The characters are also quite similar to the original, with Wednesday being the older sibling (fun fact Wednesday WAS the older sibling originally, and the exception was the TV show, though the original girl cast was 13 years old).
Also, they gave Pugsley some character. In the early 1990s movies, he was overshadowed by a very dark and morbid Christiana Ricci as Wednesday, and he fell into a near secondary character next to her strong dark demeanor. In this movie he has his own personality and storyline.
Gomez and Morticia were pretty good, more gothic and dark than passinate as in the past renditions, and they kept up the morbidity and sadism with the medivieval torture instruments and swords they're known for, I liked that, and they looked more like the Chas Addams characters, he being short and kind of greasy while she tall and very pale. Morticia did have the Carolyn Jones' walk as well in the tight dress. Fester was the funniest character, in my opinion, with his nonchalant attitude towards injuries and explosions. The main characters were actually pretty good. Grandma was an crazy old hag, Lurch an asylum escapee turned butler.
My issue was the plot. It's always the same, with the Addams eventually alienating the neighbors for one reason or another, but in this case the new neighbor was so happy and suburban most people would throw up daily living there. They pitted an extremely white bread neighborhood run by a rich reality HGTV type star with a dark, misunderstood family to once again show prejudice and ignorace against those that are different. In the TV the visitors were funny when the encountered the Addams's. This just seemed recycled with people just running off scared at first sight opposed to actually visiting the home. then of course there's the popular girl vs. Wednesday (remember the summer camp in the sequel?) It gets old. At least Pugsley had a more original subplot.
I would have liked to have seen some of the other family members from the Tv show at the family reunion, such as Morticia's sister ophelia. They were kind of just goofy side characters but they could have had a lot of fun with the extended family, as they did in the 1991 film.
However, the one thing I really hated about this movie was the ending (spoiler alert). I simply hated the ending of this movie and how they pied up the whole plot with a goofy, unrealistic "feel good" kind of weird and pointless truce where everyone just seemed to have a collective epiphany and played nice. It was just...dumb. No one was scared anymore, no unesiness, just everyone coming together in some sort of peace love harmony dribble that was pointless.
Finally, my favorite part was the spirit of the house. He hated the Addams and was just dumbfounded by them but the interactions with the spirit and the family were great. I recommend the movie for the scenes, but knocked some stars off for the plot.
-hep72

B. A. GibsonReviewed in the United States on January 24, 2020
1.0 out of 5 stars
Excited about movie, disappointed in final home product
Verified purchase
I have been a fan of Charles Addams original cartoons for a long time; long before I'd ever seen the live action movies. I was very excited to discover that an animated movie was being made using Charle's original cartoon designs, but I am very disappointed in final product made for sale. The product literature is unclear. It mentions that the movie comes with a DIGITAL CODE, but does not specify the type. Instead of the typical Movies Anywhere code (the replacement for UltraViolet) that most movies ship with, it comes with a proprietary iTunes code. This is of no use to me. I like having the disc for the special features - and internet outages, but I like being able to view the steamed version wherever I have a smart TV or device. I also let the kids view the streamed version. The code is half the value of the movie package for me. I cannot use the iTunes code and have no intention of buying an Apple product solely for that reason. I would not have bought the movie if I had known it came with an iTunes code. I returned the movie I bought and will pick it up again when it hits the ten dollar bin.
48 people found this helpful

Eric Alan MarxReviewed in the United States on January 4, 2020
5.0 out of 5 stars
Addams Family original
Verified purchase
I liked this movie; it got back to to the original Charles Addams version and it also has some hints of all the other versions of the Addams Family through the years.
48 people found this helpful

AdamReviewed in the United States on January 2, 2020
3.0 out of 5 stars
Straight to the point review.
Verified purchase
As a fan of the original Addams Family movies I did not like this one.

Sometimes artistic freedoms take a bad turn and this one took a bad turn.
45 people found this helpful

archeopteryxReviewed in the United States on January 17, 2020
3.0 out of 5 stars
Meh.
Verified purchase
Not the TV series, not the original magazine cartoons, not horribly interesting. The "Addams mentality" that is the core of this sort of thing seemed quite inconsistent. I just couldn't buy into the ANY of the characters. It came off more like a series of staged jokes than a show.
37 people found this helpful

Kelly D. BrogdonReviewed in the United States on January 1, 2020
2.0 out of 5 stars
This movie entirely relied on previous incarnations
Verified purchase
As a fan of Addams Family in the past I must say this was very disappointing. It was bland and I had to keep reminding myself to watch. The Addams themselves were flat, two dimensional, bland, and undriven. And I find it highly disturbing in entirely the wrong way that Wednesday reminded me of Veggie Tales
36 people found this helpful

Stephanie 🖤Reviewed in the United States on August 21, 2020
1.0 out of 5 stars
HOT STANKY GARBAGE 🤮
Verified purchase
This movie was well made and had a good cast that all did a good job but man this movie is absolutely NOTHING like the Adams Family I love and have grown up with- like others have said it's nothing more then a REALLY REALLY REALLY REALLY bad imitation. In the movies and the tv show the family is really close, Mortica and Gomez are madly in love with each other and it shows (even after all their years of marriage), as parents they're very accepting loving encouraging understanding and have a great relationship with their children, Wednesday and Pugsly love their parents each other and their family and are never disrespectful, Wednesday isn't afraid to be herself and doesn't care if someone doesn't like her and they not only embrace their charming darkness but flaunt it without shame but OH MY GOD this movie is the complete opposite of all of that. In this movie they don't have a strong family bond like at all they act more like they hate each other, Mortica and Gomez act more like a boring married couple who lost their spark years ago and act like they have disdain towards their children, Wednesday actually cares about what people think of her let's people change her actually changes aka conforms and constantly has an attitude problem, Pugsly is boring (I think in this entire movie he only pulled one stunt that was totally predictable), there's no charming darkness in this movie at all they all feel like average joes just wearing black clothing who happen to be living in an old house just ugh I hated this movie with a passion. I never read the original comic strip (which is what this movie is supposed to be based on) so I don't know if this is how they acted in that or not but if it is I want no part of it. The original tv show and the movies are AMAZING in every single way but this was just straight up garage and an insult to the Adams Family name. Thankfully I was able to watch this for free with a free trial to one of Prime Videos streaming ad ons and didn't have to pay for it so I didn't lose anything but my time but if you're thinking about actually spending money on this to watch it then DO NOT do it, it's not worth your money or your time.
19 people found this helpful
See all reviews
Back to top
Get to Know Us
Make Money with Us
Amazon Payment Products
Let Us Help You
EnglishChoose a language for shopping. United StatesChoose a country/region for shopping.
© 1996-2022, Amazon.com, Inc. or its affiliates