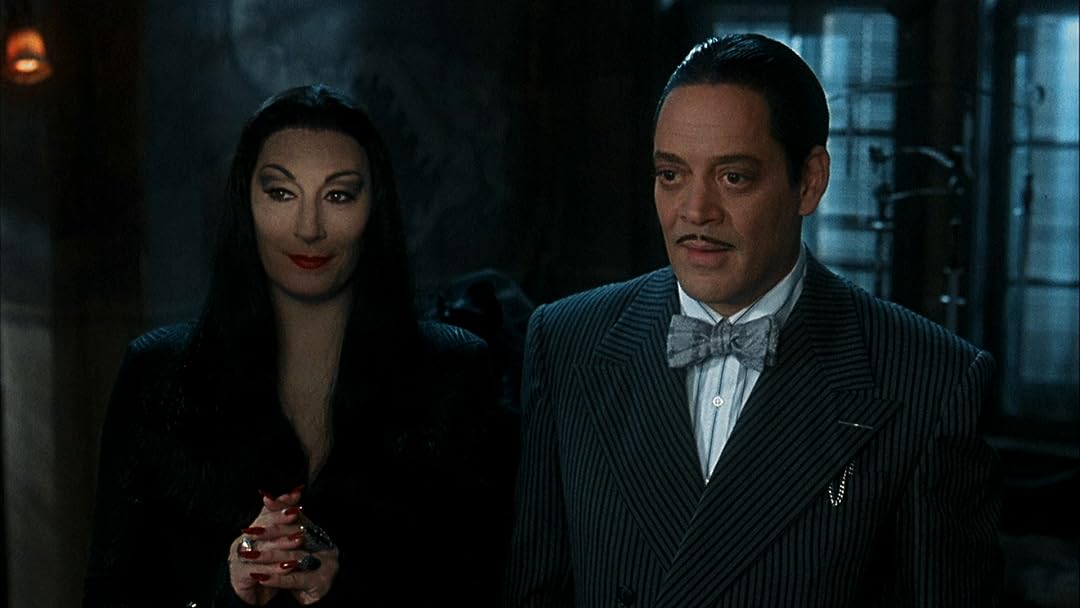 (8,952)
6.81 h 34 min1993X-RayPG-13
The family’s future grows bleak when the no-good nanny marries Fester and has the kids shipped off to summer camp. But Wednesday still has a Thing or two up her sleeve…

Cassidy wattReviewed in the United States on October 27, 2022
5.0 out of 5 stars
Movie
Verified purchase
My favorite

ShelbyReviewed in the United States on October 10, 2022
5.0 out of 5 stars
Favorite movie
Verified purchase
I always watch this multiple times a year makes me feel like a kid again

joel wingReviewed in the United States on June 7, 2021
4.0 out of 5 stars
Better than the 1st Addams Family film
Verified purchase
The first Addams Family film was a good mix of nostalgia, fun and some perfect casting. This was the second release where a new baby is born into the family and the older kids Christina Ricci and Jimmy Workman want to kill it, while Joan Cusack wants to marry and murder Christopher Lloyd. That leads to some really good lines and situations. In fact, I think this movie is better than the original. The jokes and scenes are just better crafted and there are far more laughs. It’s rare when a sequel is better than the original but that’s the case with Family Values.
5 people found this helpful

chronos099Reviewed in the United States on October 4, 2020
5.0 out of 5 stars
A worthy sequel to an excellent film.
Verified purchase
This takes everything the great first film did, adds a great new story, and creates a perfect sequel. There's obviously a lot of cheesyness (just like the first one and maybe it's just nostalgia watching a movie from childhood), but it works. The main casts performances are again spectacular, and Joan Cusack is a great addition as a "Black Widow" type of killer. They could've written off the Addams kids as a minor side story, but the camp scenes only enhance the evolution of the children's characters and are a key part of the joy of watching this film.
Both the Addams Family movies are great adaptions of old TV shows, although I have no point of reference to the original, since it came out decades before I was around. But most movies I've seen in my life of old TV shows (usually never even heard of the shows, let alone seen them) tend to be horrible. This one's a must watch.
3 people found this helpful

JanetReviewed in the United States on April 4, 2022
5.0 out of 5 stars
Wonderfully camp
Verified purchase
I love this movie!!! It’s a classic for a reason and my husband and I love to watch it all the time

Ludmila FasciaReviewed in the United States on February 26, 2022
5.0 out of 5 stars
Never a bad time to watch The Addams Family
Verified purchase
This will forever be my fave remake of the Addams Family. I wish the actor playing Gomez was still alive today. He’s the only Gomez that I’ve liked.

ponieperson311Reviewed in the United States on September 2, 2015
4.0 out of 5 stars
Funny, but not funny to everybody
Verified purchase
Our family really loves this movie but I am giving it four stars because it is definitely not for everyone. Like most PG-13 movies there is some violence in "Adams Family Values" but what distinguishes this movie from many films with this rating is its dark humor, its references to sex and its lefty politics. The movie's preferences for dark and sexual humor are established in its early scenes. "A.F.V." opens with the Adams Family children and their grandmother conducting a solemn funeral for a cat. Typical childhood scene, right? Except this cat is still meowing and scratching at its coffin/shoe box and the children are preparing to bury it alive (the little girl in particular is annoyed with the cat as she tries to quiet its noises). Later, the Adams children sit in a hospital waiting room anticipating the birth of a sibling. Another child tells an elaborate fairytale (with "a stork" and a"diamonds", etc.) meant to explain where babies come from to which the Adams girl replies "Our parents had sex." Finally, the movie mocks the faults of upper-middle class whites: their exclusion of other ethnicities and of people who do not conform to certain aesthetic and behavioral ideals.. The movie even asserts that the Indians should have killed the Pilgrims at the first Thanksgiving. So, again, hilarious but not to everyone's taste.

Michael CastReviewed in the United States on November 12, 2013
5.0 out of 5 stars
Really funny!
Verified purchase
I've seen the old seventies Addams Family. I've seen the remake/movie that precedes this one, and I am a big fan. I can relate to the Addams' because sometimes I think my own family is just like them, lol. But the sequel to The Addams Family is really funny. I especially liked Christina Ricci in this one as the character Wednesday Addams. Even as young as she was in this remake, she really shows some of her best acting skills. In this comedy, the Gothic Misfits have a hard time when Uncle Fester (Christopher Lloyd) falls in love with a nanny that turns out to be a kind of Black Widow serial killer that murders her husband's for their money, and the Addams Family fortune is at stake as she draws Fester into her web. Wednesday Addams is way too smart for her own good and The Nanny manipulates the children to be sent away, off to "Camp Chipawa" a children's summer camp for the privileged. While the Addams children are being tortured in the happy house where they show endless Disney movies, The Black Widow Nanny is free to weave her web....absolutely a movie for the library!
One person found this helpful
See all reviews
Back to top
Get to Know Us
Make Money with Us
Amazon Payment Products
Let Us Help You
EnglishChoose a language for shopping. United StatesChoose a country/region for shopping.
© 1996-2022, Amazon.com, Inc. or its affiliates