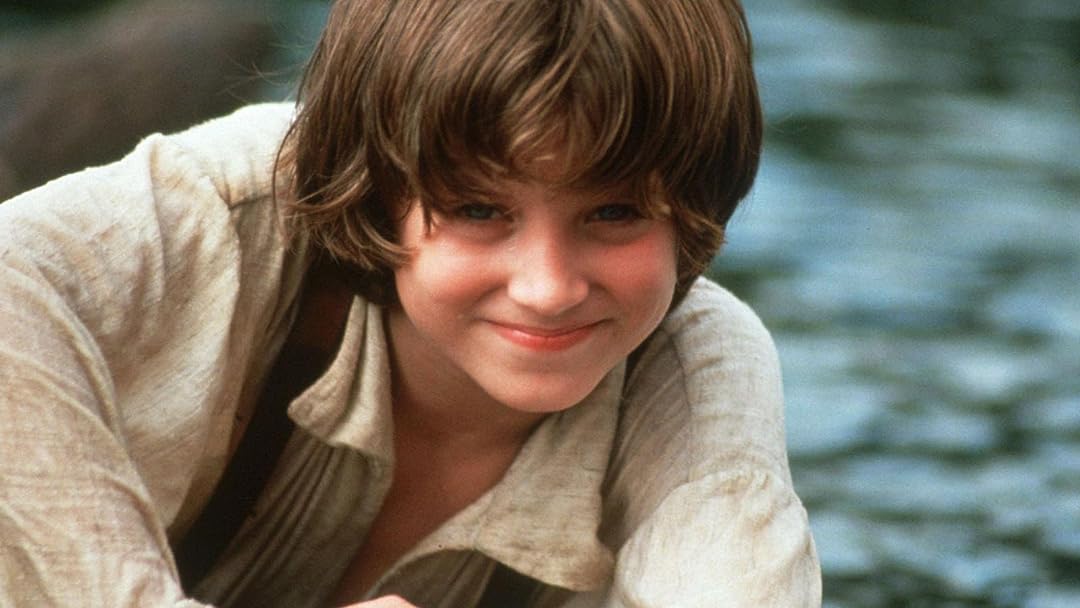 The Adventures Of Huck Finn

Danny Andre' DixonReviewed in the United States on January 26, 2017
5.0 out of 5 stars
Classic Novel Faithfully Rendered Minus a Few Scenes
Verified purchase
I perennially let my Freshmen English classes see this particular rendition of the Twain story after we've read the novel. While it does not contain ALL of the events of the original story, it DOES faithfully represent the story, conflating some scenes to get essence of it without covering every event in the novel.

As in the book the gamut of human nature, good and bad, are covered in Huck's drunken father, restrictive guardians, and close friends depicted in Tom Sawyer, and Jim whom Huck has vowed to save from slavery. There is life and death, fraud, bad religion, philosophical debate on the nature of good and evil in the film (as well as the book, which is generally listed in the top three greatest novels of all time; and I remember seeing it translated into Russian on a recent summer trip there to teach English).

Elijah Wood is the perfect Huckleberry, and Courtney Vance co-stars as Jim. The film almost makes one want to read the novel. Some themes and scenes might be disturbing. But I think most can handle it.And as always, the class is in tears as the two try to make a final escape with Huck shot and Jim about to be lynched. Okay I won't spoil it! Amazon Prime and Stream it! Buy the DVD! Get the novel and read it (I try to do so once a year). You can't go wrong.

John WedewardReviewed in the United States on December 3, 2021
3.0 out of 5 stars
The Disney PC Version of Huckleberry Finn?????
Verified purchase
Made by Disney, I expected NOTHING less than this version. This is the Politically Correct Huckleberry Finn. So, differant from the actull book, Samuel Clemmons might have a hard time recognizing his OWN novel. The ONLY thing good about this, is the "King" and "Duke" being tarred and feathered after the gold being hid in the coffin by Huck. The printed posters that show Jim "wanted for murder" and a $400 reward are right out of Disney's Imagination, along with Jim and Huck wating to take a Steamboat back up the river to Cario. Or Jim being put back into slavery and whipped. The ending has "Aunt Polly" at the Wilkes House, with Jim having been set free in the will. If you are looking for the closest version, purchase the 3 1/2 hour version, made by Halmark in 1985 as part of The Mark Twain Classics...

KalichelaReviewed in the United States on October 21, 2017
5.0 out of 5 stars
I teach sixth grade and this movie is BRILLANT. Absolute five stars.
Verified purchase
I notice that someone gave this version of Huck Finn a single star review because it "had too many unpleasant characters". Ha ha ha... yea, it's Twain's story about adventures on the Mississippi River in the 1830's. E. Hemingway called Huck Finn the greatest story to ever come out of America. It depicts slavery because Jim IS a slave on the run. Yes, there ARE some dark characters (played splendidly by Robbie Coltrane (Hagrid in Harry Potter) and Jason Robards). Alas, there are a few scenes missing, but the book is too lengthy for a two hour movie. After my sixth grade classes finish reading the (abridged) story, we watch the movie to compare. I have never had a sixth grader upset by the movie. They absolutely love this movie. This movie is really excellent. It also presents slavery is a fair light without scaring the heck out of the sixth graders... a difficult balance. Well done. It is a must own. This is my fourth copy. Other teachers borrow it and it disappears..... It is really good. Buy it.
11 people found this helpful

Mark MywordReviewed in the United States on May 30, 2021
3.0 out of 5 stars
Cute but not remotely in line with the book.
Verified purchase
Other than that it uses the name Huck Finn... do NOT expect it to follow events in the "Adventures of Huckleberry Finn". In typical Disney fashion (last 30 or so years) it is so concerned with political correctness that if you are a Twain purist... you won't like it. Little Elijah Wood is a fine actor (and if you've seen Lord of the Rings it's difficult not to see him as a young version of Frodo the hobbit.) however in this movie I find it hard to see him as the rapscallion that "Huckleberry" was--he just looks a bit too young and sheepish for the part. The storyline is okay--it's just not the story you read, IF you read the book. I gave it 3 stars because the acting was pretty good, and it was an okay storyline; but I reserve 4 and 5 stars for those that are much closer to what the original book should be.

Steve VranaReviewed in the United States on March 2, 2012
4.0 out of 5 stars
Currently, This Is the Best Adaptation of Twain's Classic Novel
Verified purchase
I teach "Adventures of Huckleberry Finn" to high school sophomores and have always included watching the film as well. For years I used the 1985 PBS adaptation (best known as the last film silent film star Lillian Gish appeared in). However, the PBS film ran nearly four hours and while it was fairly thorough, it simply was too plodding in its pace at times.

This 1992 Disney film solves that problem. The story moves along quickly and it certainly holds my students' attention. It is not, however, without its flaws:

X While the intent of the novel is maintained, there are a lot of scenes that have been cut. There is no mention of Tom Sawyer. And the entire "Phelps" episode is gone.

X The Colonel Sherburn/Boggs episode is missing. I understand that it was easy to eliminate because it did not directly advance the story line, but it is one of my favorite scenes of the novel.

X Two scenes that deepen Huck's relationship with Jim and help Huck see Jim as a person and not merely a slave are missing from the film. The first is where Huck fools Jim into thinking they were never separated in the fog, and the other is the heart-breaking story Jim tells of the time he slapped his daughter for not minding him only to find out later that she was deaf.

X In addition, when I first saw this film, I thought Elija Wood played Huck a bit too smart-alecky. After twenty years, I've come to appreciate his portrayal. Although I should point out that Twain's manuscript notes indicate that Huck is fourteen, and Woods was ten when this was filmed.

On the plus side, while the novel never has Jim discuss slavery, it becomes a talking point in the film.

As to the bonus material: The featurette "Huck Finn: An American Classic" is nothing special and runs less than five minutes. Likewise, the original trailer is of little interest. [Although it does include a clip of a scene that was cut from the final release.] And the audio commentary with the director and film editor is of marginal interest. Although they do mention a scene in the cave at the beginning of the film that was cut. (And the cave cost $23,000 to construct.) I would have been more interested in seeing that and any other deleted scenes.

Overall, this film has much to recommend it. And as a companion to the novel, I will continue to show it in the classroom until the definitive edition is filmed. RECOMMENDED
10 people found this helpful

John Jay HodgeReviewed in the United States on March 21, 2020
1.0 out of 5 stars
PG Obviously Equals Excessive Foul Language
Verified purchase
Wish the "PG" didn't mean the script was littered with "Hells" and "Damns" all though out the movie! If you would prefer your 5 year old not be exposed to foul language, you may want to find another version.
4 people found this helpful

Scott MillerReviewed in the United States on January 31, 2002
3.0 out of 5 stars
Excellent Movie; Horrible DVD
Verified purchase
The movie: A+
Elijah Wood is/was one of the greatest child actors in Hollywood history. His presence shines through even the most mediocre of films, and when he is given a good supporting vehicle, just sit back and enjoy the show.
The Adventures of Huck Finn is one such vehicle--his best vehicle, in fact. While some will complain that Twain's classic has been Disney-fied, movie lovers will see past the sugar coating to find a gem of a movie about friendship and honor, about choosing good in a world that endorses evil. As Huck comes to respect Jim, we come to love them both, leading us to one of the greatest movie endings of all time. One of my all-time favorite movies, and hands-down the best movie soundtrack I have ever heard.
The DVD: C-
Disney is notoriously slow about releasing movies on DVD, but you'd think that after taking so long they would give the customers something worth waiting for. Not so, this time around.
The only real difference between this and the LaserDisc (released in 1993) is the anamorphic video and behind-the-scenes featurette. Not only do we NOT get 5.1 sound, the Dolby Surround we DO get sounds terrible--as if it had been lifted straight from the LaserDisc (at best) or possibly even a video tape. It's especially noticeable after the crystal clarity of the Disney DVD trailer that immediately precedes the film.
In short, Disney has released a terrible DVD of a terrific movie. Chose which is more important before you buy.
28 people found this helpful

Movie NerdReviewed in the United States on January 3, 2002
4.0 out of 5 stars
An enjoyable family film
Verified purchase
I loved this film since the first time I saw it at 15 yrs old. I was reading the book at the time in school and eventhough this is missing a lot from the book it's still really entertaining. Elijah Wood and Courtney B. Vance are fantastic as Huck and Jim. This is most likely the role that got Wood casted as Frodo in Lord of the Rings as he shows that he's truly a gifted young actor. It's great to see that he has lasted so long too, I hope he's around long after the Lord of the Rings trilogy . I glad that this film is finally coming out on DVD but I wish it would offer a lot more features as it looks like there's not much at all.
See all reviews
Back to top
Get to Know Us
Make Money with Us
Amazon Payment Products
Let Us Help You
EnglishChoose a language for shopping. United StatesChoose a country/region for shopping.
© 1996-2022, Amazon.com, Inc. or its affiliates