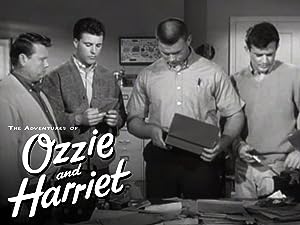 The Adventures of Ozzie and Harriet

(149)
7.42017ALL
As the sons age, we go through their teenage dating problems, marriage and careers.

Included with Best TV Ever on Amazon for $0.99/month after trial

Watch with Best TV Ever
Start your 7-day free trial
Add to
Watchlist
By ordering or viewing, you agree to our Terms. Sold by Amazon.com Services LLC.
Write review

RachelReviewed in the United States on July 31, 2017
3.0 out of 5 stars
Good But Not Exactly *Best* of Ricky and Dave
Verified purchase
It isn’t that I regret buying this DVD set, but it's left me unsatisfied. I wouldn’t call this “The Best of Ricky and Dave” but more “Featuring Ricky and Dave.” First off, I have the “Best of Ozzie and Harriet” already as well as a Mill Creek set called“Fun with Ozzie and Harriet”, so I bought this to collect episodes that I didn’t have.

Here what’s I like about this set:
1. Seeing episodes that are new to me, since I wasn't alive when this show originally aired.
2. The majority of these episodes are when David and Ricky are in college or Ricky is about to enter college, so this balances out my collection that didn't have many from the later seasons.
3. Purely aesthetics, but the menu is designed in an atomic mid century style that suits the era while being functional.

However the set features 3 episodes from seasons 1 and 2, the rest are 6-9. Where’s at least one episode from seasons 3-5? Everyone has different ideas of which episodes could have been added & limited to 24, it’s a tough choice. Yet you don’t really get to see the show when the stories had (in my opinion) stronger writing than the later seasons and showcased more comedy from Ozzie and Harriet, who understandably stepped back in many of the plots when the boys grew up. Also it seemed there was a lot more of Ricky than David. I love Ricky and his music, but for a collection including David, there wasn't much of him. "David the Sleuth", "David Gets Discouraged", and "Kappa Sigma Party" would have been great additions. But this is purely subjective...

A more pressing complaint is the clarity! Example, on disc 1 (The Picture in Rick’s Book) the picture “pulses” going from clear to blurry, compare it to someone lifting one's eyeglasses up and down. Thought it was just my disc but another review mentioned it as well! This is my biggest disappointment because it's highly distracting. I'm fine with the occasional dust/scratches, but this is headache inducing. NOT all of the episodes are like this though, so that's why I didn't return it.

Overall this is your best bet if you want to collect as many O&H as you can, like me! Though these episodes are edited, the plots still make sense. (Expect not to see the intro/theme song much.) All episodes are pleasant and you'll probably laugh or at least crack a smile throughout. But if Shout Factory were to release another set, maybe featuring more from seasons 3-5, hopefully episodes with clarity issues are corrected or replaced with other clearer ones so I can focus (no pun intended) on enjoying the happy times of the Nelson family!

RoseReviewed in the United States on July 25, 2019
5.0 out of 5 stars
Best old show
Verified purchase
Wish they would have all the episodes in all the seasons. Still missing half.
4 people found this helpful

Maribeth BrinsonReviewed in the United States on June 14, 2014
5.0 out of 5 stars
More of the young Nelson family and Ozzie who never seemed to have a job.
Verified purchase
Honest, how did he do it? Was it like real life, a former bandleader, his singer wife, who did a few movies, but these Nelson's made enough money that Ozzie never had to work? As I said before, I like these when Rick was a youngster. When I want to watch something more comfortable, less hectic, never mean, the Nelson's are a nice place to visit and I like the old commercials too!
12 people found this helpful

fuzzReviewed in the United States on December 23, 2007
1.0 out of 5 stars
Look ma, I can edit stuff!!!
Verified purchase
I own this set and want to warn others about it. If you're a fan of old tv like me the ideal is a well restored program as originally broadcast ( commercials too in some cases). In this set the show's openings and closings are even edited. Most shows in the set just start with the action, NO THEME, NO OPENING OR CLOSING. Instead you have some would-be announcer/tv historian narrating an intro to each episode. WITHOUT DOUBT THE WORST JOB OF A TV SET I'VE SEEN. O & H is a great old show, that's the one redeeming value here, but hardly worth the annoyance. Especially since there are now some well done sets out on dvd (and some adequate ones in vhs if you want). Stay away from this butcher job!
17 people found this helpful

ColoraturaReviewed in the United States on March 29, 2017
4.0 out of 5 stars
Hardly the Best of Ricky and David, but excellent value for the price
Verified purchase
Whoever titled this collection wasn't paying too much attention to the actual content. "The Best of Wally" (Skip Young) maybe, but hardly "The Best of Ricky and Dave." I mean, where is their trapeze act episode? Where is the episode that included documentation of a young Ricky being surprised with a cake and a song on the set on his actual birthday? Where is that great episode where Dave dreams he is all the characters in a PERRY MASON-like courtroom scene? In fact, in some of these episodes, Rick and David hardly appear, and in several Dave is nowhere to be seen. Also, the bulk of the material comes from the Malt Shop days when the two boys were grown and either in college or married, which was not the period when the show was funniest or most inspired. (We do get the first episode to feature Kris, "Mrs. Rick Nelson", and Rick's 21st Birthday episode.) Several later episodes are clearly focused on Ozzie, or the shenanigans of Ozzie and his neighbor Joe Randolph (Lyle Talbot). That said, if you love the show, as I do, these quibbles don't really matter too much - it's wonderful to have these episodes in decent shape at such a low price. The set was compiled from 1985 era analog masters created for the Disney Channel broadcasts, and they are edited to omit as much reference to sponsoring companies as was possible. They are not horrible, as some reviewers here have said, but as good as presently exists. I wish they included the tailor-made commercials that Ozzie and Harriet filmed for each episode, but if Shout! Factory was to produce a box set of all the 1985-86 masters, incomplete as they are, I would be the first to buy it and toss out my old VHS tapes. The great plus here is a wealth of Rick Nelson performances with James Burton on guitar, including a color run-through of the long-unofficially-released "Fire Breathing Dragon."
15 people found this helpful

Maribeth BrinsonReviewed in the United States on June 14, 2014
5.0 out of 5 stars
Different little Ricky, Nelson instead of Ricardo
Verified purchase
I never saw these episodes when Rick was the wise guy little brother, I only remember Rick the teenager and married man. So I'm enjoying these decently priced DVD's of the Nelson's. Ricky, billed as irrepressible, he is, boy. 'Boy' is his frequently used expression. But it's funnier, if Harriett says it. Maybe just one would be enough for some, or even most, but I'd like to get a few more to see The Nelson's first seasons.
4 people found this helpful

baron67Reviewed in the United States on July 15, 2008
5.0 out of 5 stars
Well Worth The Purchase Price
Verified purchase
For old - or new fans (like me) of the "Adventures of Ozzie and Harriet," this boxed set is a welcome change from the countless cheap DVDs with the same 10 or 12 episodes we've been subjected to over the past decade or so.

First, there are quite a few more "never before available on DVD" episodes on this set than on the first. Granted, there are a few that are already out there, but the sound and picture quality on this set is vastly improved from anything released so far.

I, like many others would like to have the series released like just about every other TV series has been - by SEASON. I can't tell you why this hasn't been done . . .

Shout! has done a good job on the digital transfer - but I would much rather see every UNCUT episode from season 1 to season 14. I hope this isn't a trend where a company will release "favorite episodes" for years and then come out with the "complete set" after the fans have spent hundreds of dollars on previous boxed sets.

There were 435 "Adventures of Ozzie and Harriet" episodes aired. Some were great, some okay, and some were not exactly life-changing experiences, but they all deserve to be seen by the fans!
Whatever it takes - let the public see episode 1/1 to 14/24 . . . PLEASE!

Until we see each season represented on DVD, do not hesitate to buy this set. The prints are good, the audio is good, and Rick sings some of his best (if under-rated) songs of his early career. Overall, a solid B for content - and an A- for the visual and audio aspects.
48 people found this helpful

B. BaldwinReviewed in the United States on July 23, 2008
5.0 out of 5 stars
America's Favorite Family - At Their Best!!!!
Verified purchase
I don't know what there would be not to like about these classic shows from TV's "Golden Era". The Adventures Of Ozzie And Harriet has been sorely neglected in recent years, never turning up in syndication, and heretofore only available in cheaply made public domain DVD's.

The Shout Factory DVD releases aren't perfect, and certainly some additional time and money could have been spend cleaning up the prints, but compared to what we've had in the past, it's almost as if we're watching first run broadcasts of the show. To my eyes it looks like Shout used versions of the program that were broadcase years ago on The Disney Channel, back when it was a pay-premium channel. Still, nothing to complain about in my book, what Shout has given us will likely never be released in any better quality.

All the same, it's great to see "America's Favorite Family", Ozzie, Harriet, David and Ricky again.....They've been away far too long!!!

I would recommend this set and the previous Should Factory release to any Nelson Family fan, or fan of nostalgic/classic television.....Shame they don't make 'em like this anymore.

As has been previously menitoned in earlier reviews, there are plenty of Ricky Nelson tunes throughout the discs, including an un-cut performance of one of the all-time quintessential Rock & Roll songs, "Hello Mary Lou". Ricky and his lead guitarist, the legendary James Burton, never sounded better.

So, journey back in time to the Black & White Days of Classic American Television with the Nelsons.......Buy with confidence!!!!

More Good News!!! Looks like we'll have a Yuletide visit from the Nelsons this year as well...Amazon has a Shout Factory, single disc, "Christmas With The Nelsons" available for pre-order (July 2008)
3 people found this helpful
See all reviews
Back to top
Get to Know Us
Make Money with Us
Amazon Payment Products
Let Us Help You
EnglishChoose a language for shopping. United StatesChoose a country/region for shopping.
© 1996-2021, Amazon.com, Inc. or its affiliates