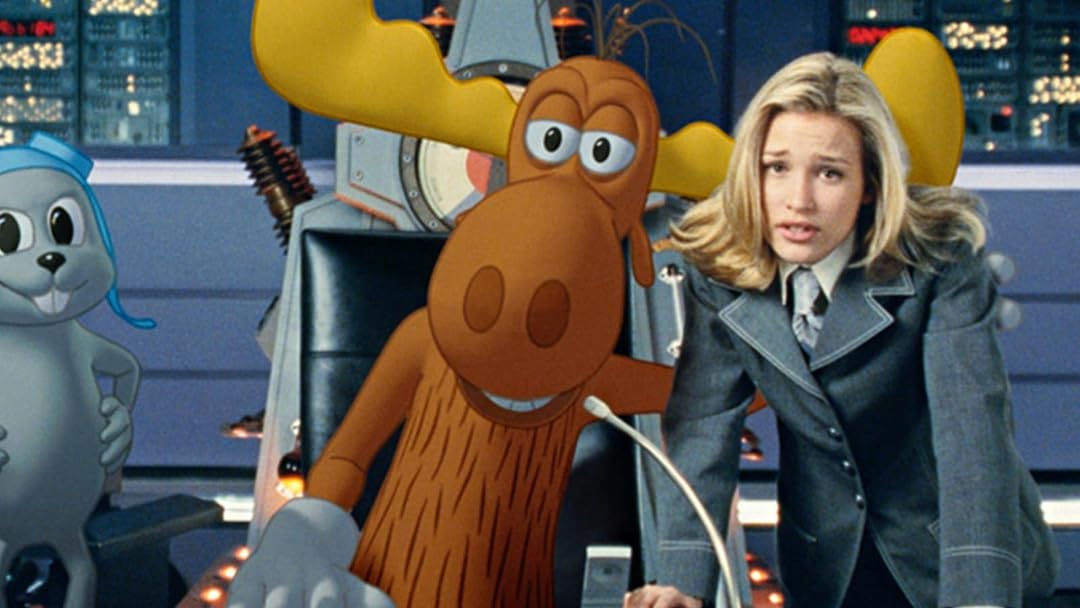 The Adventures of Rocky and Bullwinkle

(517)
4.21 h 32 min2000X-RayPG
In this cool live-action / animated update of the hit tv series, Rocket J. Squirrel and Bullwinkle Moose join up with the FBI to thwart bad guys Fearless Leader, Boris and Natasha. With Rene Russo and lots of big-name cameos.

Joshua TinsleyReviewed in the United States on September 12, 2017
4.0 out of 5 stars
It's... really not THAT bad.
Verified purchase
This is one of those films that is pretty self-aware that it's not that good, and is intentionally bad at times. It's a style that works sometimes (see Black Dynamite) and fails other times (see Samurai Cop 2). This is a time where I think it actually kinda works. From Bullwinkle's very stupid puns to the constant fourth wall breaks. From John Goodman's cameo that references that it's John Goodman to Jonathan Winters making a cameo THREE times to play THREE different characters. This movie just knows it's not THAT great, and that in return helps it with being entertaining. Robert DeNiro is great as Fearless Leader and the rest of the cast (although mostly cameos, really) are pretty alright as well. This is truly a nice family film that I suggest watching if you were a "90's kid" (it's oddly nostalgic for me, even though I've only seen it recently).
I don't understand a lot of the hate this movie gets in reviews. It's fun, and I can excuse the film's stupid, stupid, stupid, stupid, stupid puns, because the story makes sense and the film realizes it's not gonna be some masterpiece and just tries to have fun, and sometimes in a film, that's good enough for me.
8 people found this helpful

H.d.z.Reviewed in the United States on August 16, 2017
5.0 out of 5 stars
Talking moose and squirrel make really great fantastic film!
Verified purchase
Not only does this movie possess a great soundtrack, but it's also a visual wonder and delight. The humor is classic and indeanablely
wholesome, the photograph is some of the best ever and it has lots of love, which everyone should enjoy, even the fearless leader. The story is clever and the visiual language is rich, not to mention there's a smoragoborg of talent and more!
7 people found this helpful

teols2016Reviewed in the United States on June 19, 2014
3.0 out of 5 stars
Odd, But Somewhat Endearing...
Verified purchase
Right away, the highlight of this film was Piper Perabo. Though she was way too corny at times, as were the rest of the cast, she was worth watching through to the end. I've never seen the Rocky and Bullwinkle cartoons, but this film immediately has me interested in seeing what they're all about. As for the film itself, it was decent. It engaged in just about every Hollywood joke imaginable, from celebrities being "above the law", as a judge put it, to the many, sometimes random cameos throughout the picture. I do now understand that joke about "Robert Deniro's agent" that was made at the 2014 White House Correspondents Dinner...the man seems to take so many different roles. Here, where he plays Rocky and Bullwinkle's Russian arch-nemesis Fearless Leader in 3-D form, he does all right and certainly looks the part, but I just can't remember him doing anything really funny. Again, Piper Perabo was my favorite. If my timing's right, the Rocky and Bullwinkle cartoons were coming out around the same time as many whimsical cartoons like the one about the talking race car (circa 1960ish), so I'd say the humor was spot-on. Maybe because other cartoons of the time like The Flintstones are always being re-run and are therefore better known, this film just didn't do as well as, like me, others had probably not seen the original cartoons. Oh well, I'm interested now, so let's see what they're all about. For now, this was a decent film that only went overboard in corniness every so often. Enjoy.

Just some dude with an opinionReviewed in the United States on November 4, 2013
5.0 out of 5 stars
Review for The Adventures of Rocky & Bullwinkle
Verified purchase
I saw this movie as a child, when it was in theaters in 2000. And as a fan of the old Rocky and Bullwinkle cartoons, it lived up to my expectations. (Nickelodeon used to air old episodes of Rocky and Bullwinkle in the 90s.)

But does it hold up? I say YES! At least for me it does.

I think that the animation is borderline horrendous by fake it looks. But I think that adds to the charm of it, since they are playing cartoon characters in the real world.

But otherwise, it's a pretty fun kids movie. And I remember me and my brother both leaving the theater very happy after this seeing movie. Sadly as you grow up, that becomes a rarity. I can't even remember the last time I left a movie going "THAT WAS AWESOME!!!!!"

So watching this again was a fun blast from the past. And the celebrity cameos are a lot of fun too. I had no idea who these people as a child.

elgrecoReviewed in the United States on August 4, 2016
4.0 out of 5 stars
Just good fun
Verified purchase
Ok, this is not high art. However, this is funny art; a blending of animation, familiar voices and funny plot line. Leave your brain at the door and watch some veteran actors have a great time with tongue and cheek humor. Most of all, it stars Rocky and Bullwinkle; the hold cartoon strip's humor is still intact; bad puns, adulterized sophomoric humor and good fun. Good for the whole family though the younger kids will wonder what hit them and the older kids will wonder about the adults laughing.
One person found this helpful

shameka jacksonReviewed in the United States on March 8, 2019
5.0 out of 5 stars
Remember your inner child
Verified purchase
I liked that the picture was clear and that it made the movir reach all the way across my sgreen when I watched the movie.there was not anything about the movie that I did not like. I like Rocky and bullwinkle.

another NelsonReviewed in the United States on October 21, 2017
5.0 out of 5 stars
Best laugh since "MAD, MAD, etc"
Verified purchase
Will just go ahead and buy. I have the Whole Series and expected to be disappointed, but was GREATLY SURPRISED. Didn't recognize actors playing Boris and Fearless Leader for 10 minutes. Watch at all means.
One person found this helpful
See all reviews
Back to top
Get to Know Us
Make Money with Us
Amazon Payment Products
Let Us Help You
EnglishChoose a language for shopping. United StatesChoose a country/region for shopping.
© 1996-2022, Amazon.com, Inc. or its affiliates